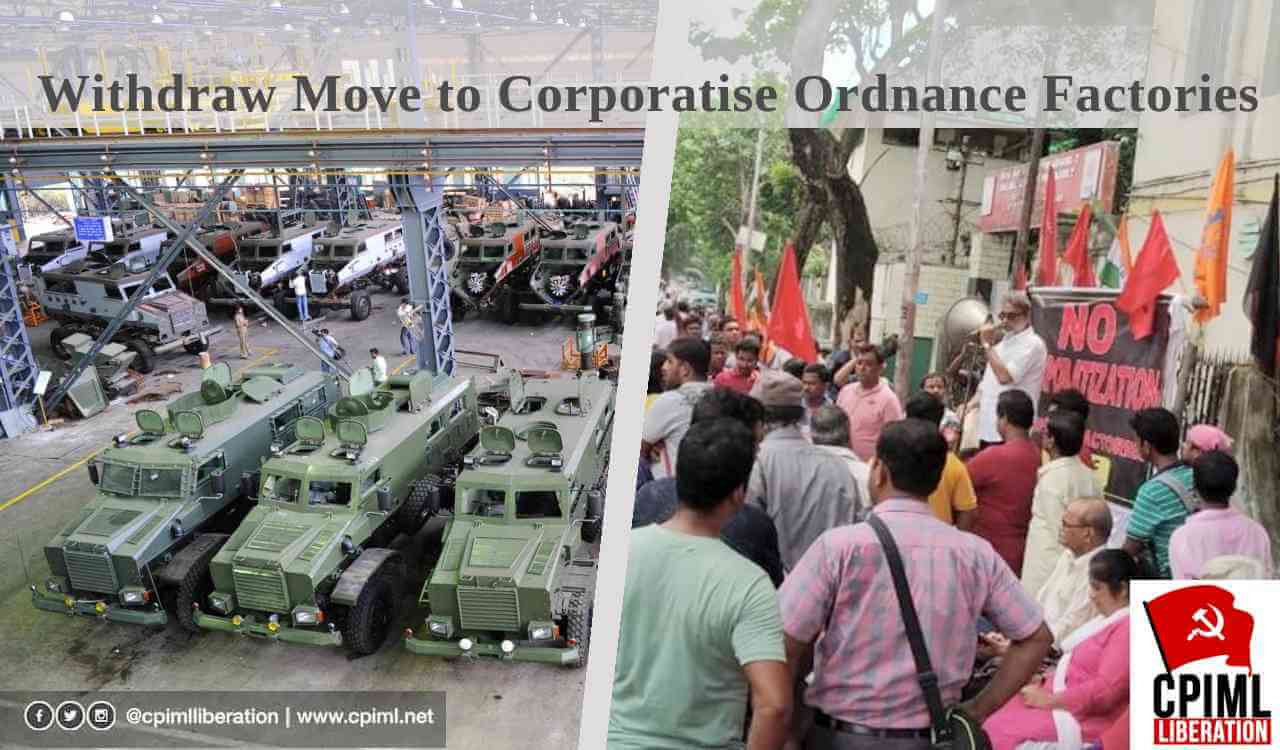 Reneging on the assurances given by successive defence ministers, the latest in August 2019 in the wake of the historic strike of defence employees, the Modi government has chosen to implement its plan to dissolve the Ordnance Factory Board and transform the forty one ordnance factories into seven corporate entities. Corporatisation is a well known first step towards privatisation and the government assurances of protecting employee interests are just an eyewash. Corporatisation will be coupled with the opening up of the defence sector to indiscriminate FDI. Together, these two shifts will weaken the backbone of India's defence industry and strategic preparedness while hampering the present and future interests of defence employees.

CPIML calls upon the Modi government to withdraw this decision and listen to the considered and united voice of ordnance employees. We also appeal to the Indian working class and the farmers' movement to extend full support to the defence employees in their struggle against corporatisation.

Protest in Bhilai against Corporatization of Ordnance Factory Board

Under the call given by central trade unions, AICCTU and AITUC organized a protest on 19 June 2021 at Main Gate, Sector-1, Bhilai against the corporatization of the Ordnance Factory Board by the Modi government. It is notable that trade unions as well as employees have been protesting extensively against corporatization.

A statement issued by the trade unions said that the Modi government is bent on establishing Company Raj and betraying workers and farmers. Workers' rights are being snatched away during the Covid pandemic, and a drive to sell all government companies including SAIL is being carried out. When people protest against the Modi government's policies they are harassed and hunted. Under cover of the pandemic disaster the government is serving the interests of capitalist companies and escalating inflation and spiralling prices.

Through the protest the demand was made that the Modi government should immediately withdraw the corporatization of the Ordnance Factory Board. The protest was attended by workers and labour leaders including Brijendra Tiwari, Vinod Kumar Soni, Basant Kumar Uikey, Vinay Mishra, Sundar Lal, Shekhar Rao, Ashok Miri, Vinod Kumar and Rupesh Kosre.