Bihar Government is Responsible for Ongoing Deaths Due to Illicit Liquor 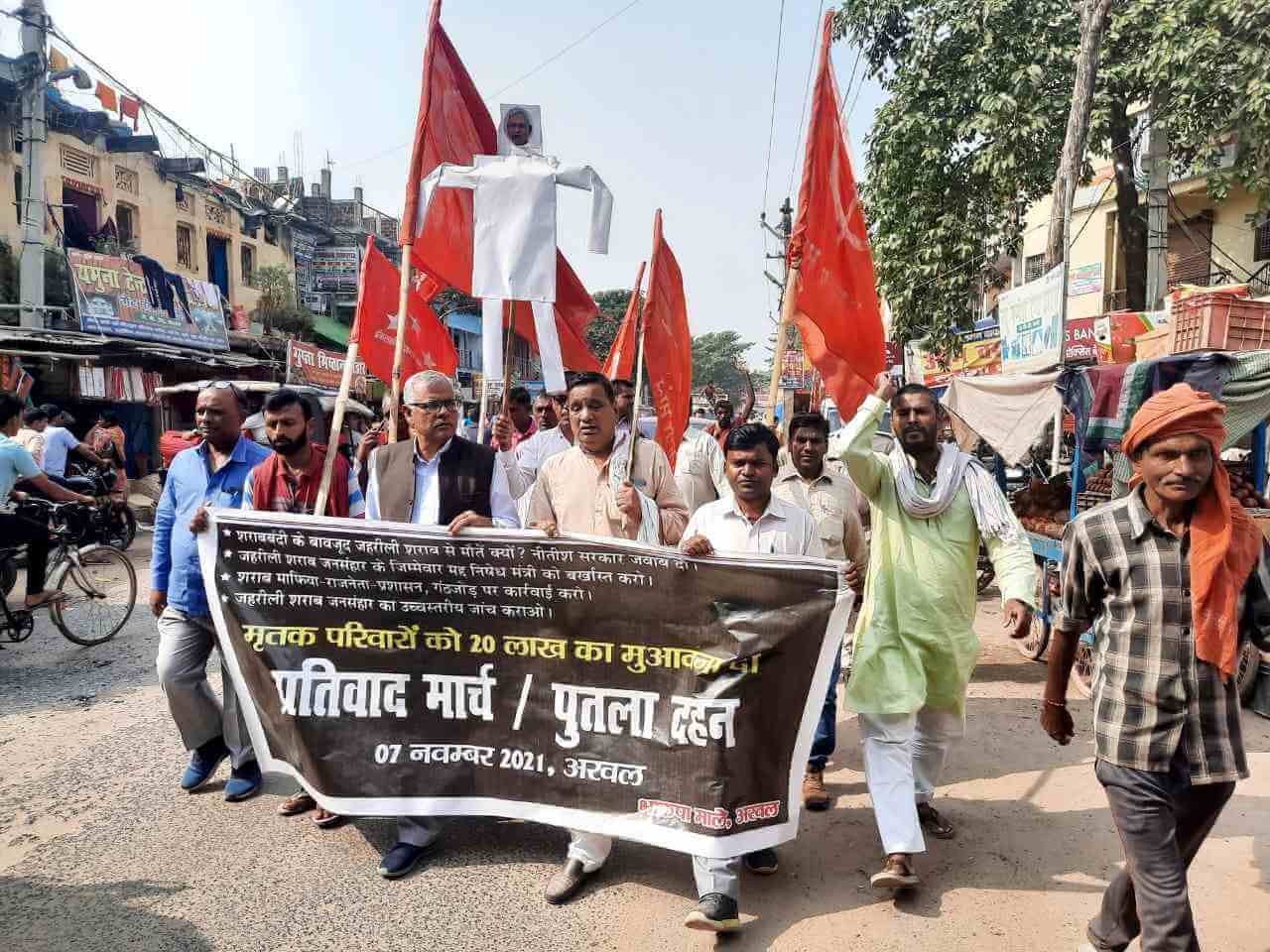 CPIML Bihar State Secretary Kunal said on 5 November that the death of dalits and the poor due to poisonous liquor has become a normal and routine occurrence in the state, this was told to the government repeatedly that poisonous liquor is being produced under protection of the politician-administration-mafia nexus, but the government is turning a blind eye to this reality. This has resulted in the deaths of more than 35 people (so far) on Diwali day at Gopalganj and Champaran, most of them from poor communities. Therefore the government is fully accountable for these deaths.

CPIML demands from Nitish Kumar that Prohibition Minister Sunil Kumar should be removed immediately and the kin of toxic liquor victims should be given a compensation of Rs 20 lakhs. The government must make the necessary policy changes for these measures.

The demand for prohibition across the state was a popular one for which there had been a forceful movement. But the law which was passed under pressure from this popular demand has proved to be a draconian law. The illicit liquor trade continues to flourish and people continue to die from consumption of toxic liquor. Just this year about 100 people have fallen victim to poisonous liquor. On the one hand people are dying, and on the other hand the poor are being punished. This prohibition law has come as a big blow to the poor. CPIML has repeatedly stressed the need for a concerted social campaign to get rid of alcoholism and for de-addiction centres to be opened, but the government has made no efforts in this direction.

Action needs to be taken against the politician-administration-mafia nexus but till today nothing has been done. The government should institute a high level enquiry into this nexus and nab the real culprits.

Statewide Protests on 6 and 7 November in Bihar

Left parties have expressed grave concern over the continuing deaths in Bihar due to toxic liquor and condemned the government's insensitive and irresponsible attitude towards this issue. Five Left parties issued a statement stating that the illicit liquor trade is flourishing in the state with protection from the ruling powers and the police. It is not as if Nitish Kumar is unaware of this matter, but how many more deaths will it take to make him come out of his slumber? Just this year 100 lives have already been lost, and reports are coming in of more deaths. There is no end in sight to this. Nitish Kumar is always eager to lap up praise for prohibition, but the reality is that he is providing an opportunity for the illicit trade of poisonous liquor to flourish unchecked in the state. The liquor mafia is prospering while people are dying.

If the government has even a shred of honesty it should probe the administration-politician-mafia nexus that is earning fat profits from illicit liquor trade. This machinery cannot operate without the administration's protection. Everyone knows that some provisions of the prohibition law are draconian and the poor are bearing the brunt. On the one hand the illicit liquor trade is flourishing while lakhs of poor people have been thrown into jail where they are forced to live incredibly hellish lives.

The left parties have time and again told the government that de-addiction measures need to be put in place. De-addiction centres should be opened on a large scale and awareness campaigns should be run, but progress in this direction is zero. Therefore, Left parties will run campaigns in villages and panchayats against consumption of liquor and appeal to people to keep away from this social evil. They have demanded the immediate removal of the Prohibition Minister in Bihar and Rs 20 lakhs compensation for the families of the deceased victims. We appeal to people to hold effigy burnings of the Prohibition Minister in villages and at panchayat level against the insensitive attitude of the government. A comprehensive monitoring system including social workers should be constituted at the Block level across the state to end the illicit liquor trade without delay.