Minorities are Once Again being Targeted in Bihar 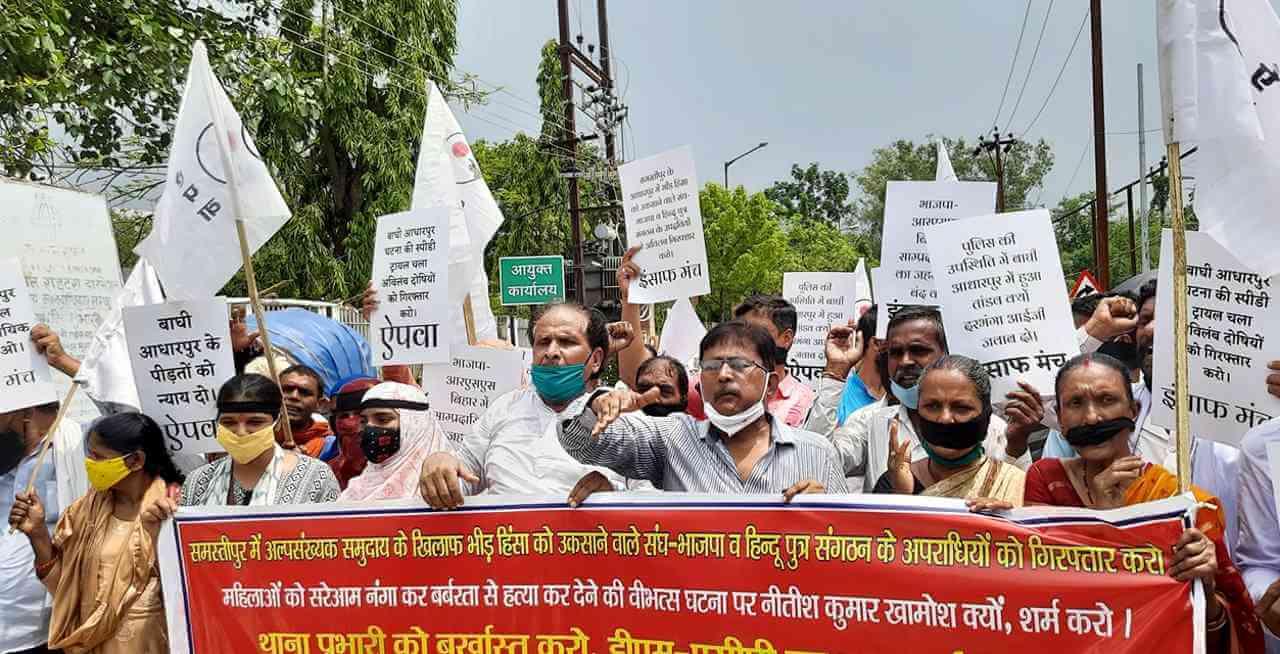 CPIML Bihar State Secretary Kunal on 28 June 2021 expressed deep concern at the constantly growing number of recent incidents of targeting minorities in Bihar. He said that BJP is bent on vitiating the atmosphere in Bihar and the entire country with the intent of communal polarisation of the Uttar Pradesh election. He demanded that the Bihar Chief Minister Nitish Kumar should rein in the toxicity against minorities and ensure their safety.

He drew attention to the recent incident of mob lynching of a youth Shoaib in Chakai village, Araria District. Shoaib was tied down by an angry mob and brutally beaten to death. Comrade Kunal said there should be a high level enquiry into the incident and strict action against the guilty. The police and administration must keep an eye on the forces spreading communal hatred.

Another incident occurred at Samastipur. Deputy Mukhiya Mohd Hasnain murdered Shrawan Rai in Aadharpur village, Tajpur Block after a dispute. After that, antisocial elements attacked the Deputy Mukhiya's house, beat up his wife Sanovar Khatoon, nephew Mohd Anwar, uncle Mohd Nurein and daughter Nusrat Parveen and shut them inside a building. Sanovar Khatoon died on the spot from the beating. Later the police took the others, in critical condition, for medical treatment. Mohd Anwar died on the way. It is very concerning that no one has been arrested so far in this matter. CPIML demands that the forces creating such mob mentality should be identified and strict action taken against them.

The minority community is being targeted in the Darbhanga blast incident also. Earlier also the BJP had spread false propaganda by falsely linking the Banka bomb blast incident with 'terrorism', whereas the administration repeatedly denied any such connection.

The Uttar Pradesh police have arrived in Muzaffarpur to interrogate the deaf and dumb son (a teacher in a Kanpur school for the deaf and dumb) of Iftikhar Khan (associated with CPIML and Insaf Manch) in connection with a conversion case. The handicapped teacher's laptop and phone have been confiscated. The UP police were putting pressure to take him to Lucknow for interrogation but backed down when the family members raised the question of legal notice.

A team of CPIML MLAs visited these places and submitted a report to the government.

The BJP-Sangh hand was behind the frenzy of brutal attacks, mob lynching, arson, loot, and violence against women to which the minority community was subjected after Ward member Shrawan Yadav was killed on 21 June at Chaknijam in Aadharpur Panchayat, Samastipur. The allegation was that this killing was done by Ward Councillor and Deputy Mukhiya Mohd Hasnain. People associated with an organization called Hindu Putra incited mobs to violence against the minority community. A CPIML enquiry team visited the spot and brought out this truth.

After the killing of Shrawan Yadav on the morning of 21 June people blockaded the road for about 2 hours demanding the arrest of the accused person Mohd Hasnain. However, incited by Hindu Putra leader Balram Singh Kushwaha from neighbouring Baghi village, BJP-RSS leader Dhirendra Kumar Dhiraj and Motipur-Aadharpur BJP Cooperative Dept Working President Krishna Kumar Gupta, the protesters turned into a mob and started attacking Mohd Hasnain's family members. At the behest of Sanghis, Mukhiya Vishwanath Rai incited the thousand-strong mob, which had assembled within hours from Aadharpur, Baghi, Tajpur, Bherukhara, Diuara and other villages, to violence, saying that we must teach Muslims a lesson, no member of Mohd Hasnain's family should be left alive. After that the mob, in the presence of the police, launched an attack on the houses of Mohd Hasnain and his 2 brothers Noor Mohd and Noor Alam.

The mob dragged Mohd Hasnain's wife 35 year-old Sanawar Khatoon (a teacher) from the house, beating her continuously. They chased and beat his daughters Chahat Parveen and Ibrat Parveen, his elder brother 60 year-old Noor Alam, and his nephew Mohd Anwar. The mob beat up and dragged these 5 people near Shrawan Kumar's house and in front of the assembled crowd they disrobed Sanawar Khatoon completely, pulled out her hair, brutally beat her, inserted a rod in her private parts and killed her. Mohd Anwar was also beaten and killed.

Most unfortunate was that all this was done in the presence of the police. It seemed as if the administration had given free licence to the riotous mob to do as they liked. Marks of sword and axe wounds were found on Mohd Hasnain's daughters' bodies. In addition, another section of the mob was looting and setting fire to the houses. Property worth lakhs was looted. After looting silver, jewellery, costly vessels and goods, a car and two motorcycles were set afire. The above information was given to the enquiry team by Mohd Hasnain's elder daughter Nusrat Parveen who managed to hide from the mob.

It is astonishing that none of the criminals in this heinous incident has been arrested so far. The FIR also does not contain all the names of those who incited the mob lynching. The criminals are roaming free and without fear.

In addition to meeting Mohd Hasnain's family members, the CPIML enquiry team also met Shrawan Kumar's family, saw the houses which had been set afire, the site of the gutter dispute, and the spot where Shrawan Kumar had been shot, and spoke to the people around. They found that before this incident there had never been any kind of communal disharmony in the village. On 20 June there had been a dispute and blows between Mohd Hasnain and Shrawan Kumar regarding a gutter (nullah), after which Shrawan Kumar was killed. After that the entire incident was twisted against the minority community and the brutal lynching and violence was perpetrated, as a result of which 2 persons have been killed so far and 3 others are critically injured.

The CPIML enquiry team holds that an FIR should be registered against the names of all the BJP-Sangh and Hindu Putra people who incited mob violence and breaking of law and order. The local Thana in-charge who gave free rein for the mob violence should be removed from his post and the District DM and SP who failed to prevent violence against women should be held accountable and action taken against them. CPIML, Insaf Manch and AIPWA organized a protest against this horrific incident on 3 July.

The enquiry team also probed the Darbhanga bomb blast incident. They said that the blast was minor; there should be an enquiry into the incident, but it is very wrong to link each such incident with 'terrorism'. The enquiry team comprised CPIML MLAs Virendra Prasad Gupta and Manoj Manzil, Insaf Manch leaders Suraj Singh and Aftab Alam, CPIML leader Surendra Singh, AIPWA leader Vandana Singh and AISA leader Pappu Kumar.

AIPWA, Insaf Manch and CPIML organized a protest march in Kalyanpur on 3 July under the statewide program to demand the arrest of the Aadharpur triple murder accused persons. The protest also demanded that Nitish Kumar should break his silence on the heinous incident of stripping and brutal killing of women, take action against BJP, RSS, Hindu Putra and such organizations that incite mob violence, provide security for the three sisters rescued from the mob, and transfer the concerned Thana in-charge, DM and SP. The march culminated in a meeting at Basudevpur Chowk presided over by AIPWA District President Vandana Singh and conducted by Insaf Manch District Secretary Khursheed Khair. The meeting was addressed by CPIML, AIPWA and Insaf Manch leaders who demanded Rs 10 lakhs compensation and government jobs for each of the victim families, repair of the houses destroyed by arson, and rations for the affected families.

Addressing the meeting, CPIML Mithilanchal in-charge Dhirendra Jha said that the Aadharpur incident is one of the most barbaric in the State where a mob incited by the Sangh, BJP, and Hindu Putra stripped and beat women to death, beat Mohd Anwar to death, abducted three young girls from their home and beat them up in a closed room. Thirteen days have passed since this barbaric crime but not a single accused person has been arrested. We demand that Nitish Kumar should end his silence in this matter and all the accused persons should be arrested.