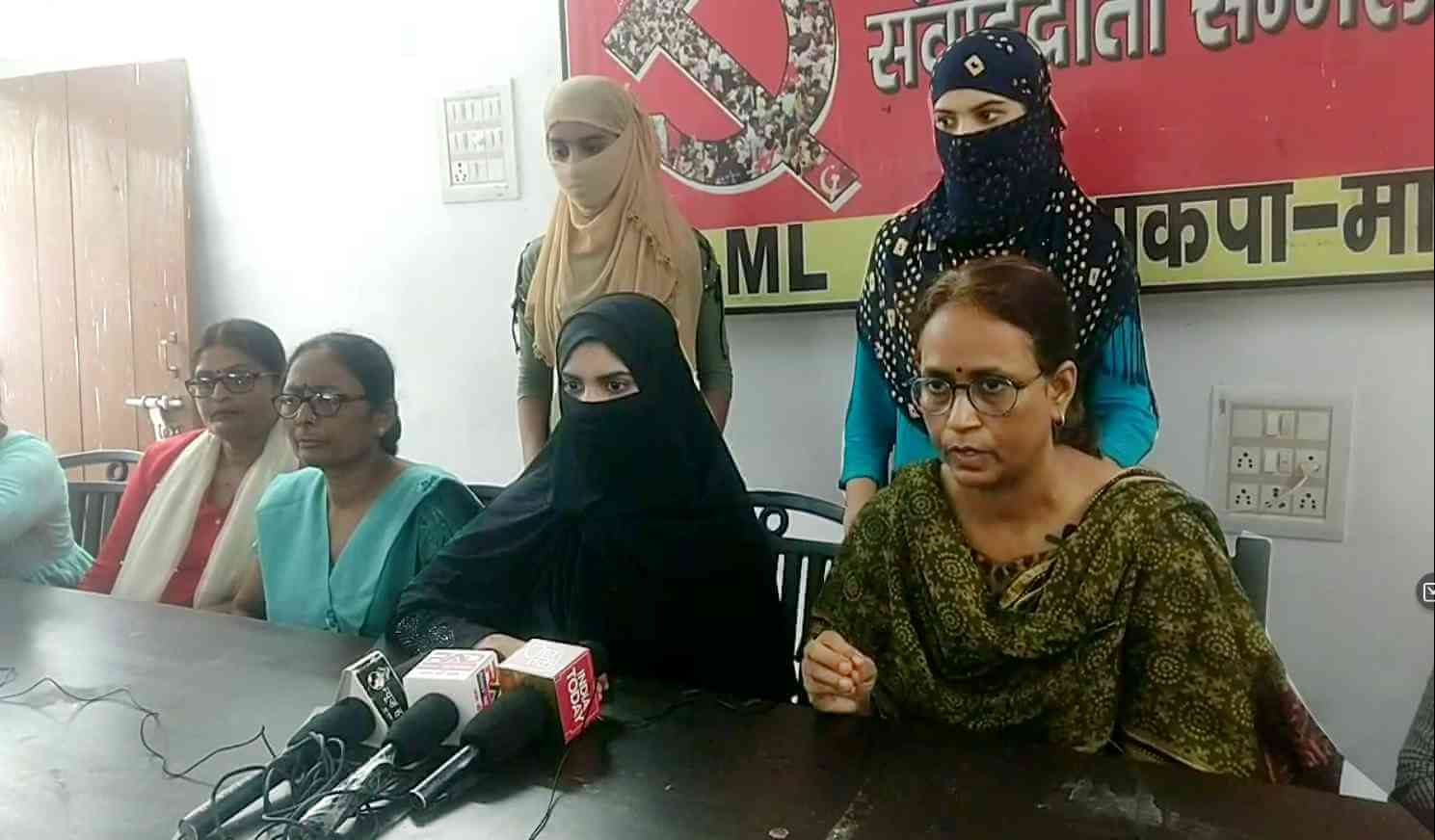 Girls from the minority community who were the victims in the brutal mob lynching incident in Aadharpur (Samastipur) held a press conference in Patna on 13 July 2021 to appeal to the Home Secretary of Bihar for justice. The press conference was organized under the auspices of AIPWA and was also attended by AIPWA General Secretary Meena Tiwari and State Secretary Shashi Yadav.

AIPWA General Secretary Meena Tiwari said that the government and administration are maintaining a loud and conspicuous silence over the heinous mob lynching in Samastipur. The main accused has not even been arrested yet. All three daughters of mob lynching victim Sanowar Khatoon are living in great fear. Their future hangs in balance. The government should take immediate action in this case. Sanowar Khatoon's daughters Nusrat Parveen, Ibrat Parveen and Chahat Parveen were present at the press conference.

AIPWA leaders said at the press conference that an FIR should be registered against all the BJP-Sangh and Hindu Putra members who broke the law and order and incited mob violence, as well as against the local Thana in-charge who gave free rein to the mob violence. Action should also be taken against the DM and SP who failed to curb the violence against women. After the press conference an AIPWA-led delegation met the Bihar Home Secretary. The delegation included CPIML MLA Manoj Manzil.

Nusrat Parveen said, a mob with hundreds of people surrounded her house in the presence of the police shouting about the murder of Shrawan Yadav on 21 June in Aadharpur village. They dragged out my teacher mother Sanowar Khatoon, tearing her clothes and beating her. After that they dragged out my two sisters, beating them also. My mother and paternal uncle Mohd Anwar were beaten to death near Shrawan Yadav's house. My two sisters were beaten half-dead and thrown into a water pit from where neighbours later rescued them. After that the mob looted cash, jewellery and valuable goods from my house, my uncle's house and his customer service centre, after which they set fire to and completely burned down the houses, car, and customer service centre. Mofassil Thana Case No. 282/21 has been registered in this regard. The police is not showing any activeness in this case.

Through the press, Nusrat Parveen has made the following demands from the Bihar government:

1. All the accused persons in the above case should be arrested without delay.
2. Government jobs for family members of deceased Sanowar Khatoon and Mohd Anwar.
3. Proper compensation for looted cash, jewellery, burnt houses, car, customer service centre and other goods.
4. Guaranteed safety of family members of victims.
5. Action against police personnel who remained mute spectators of the entire incident.