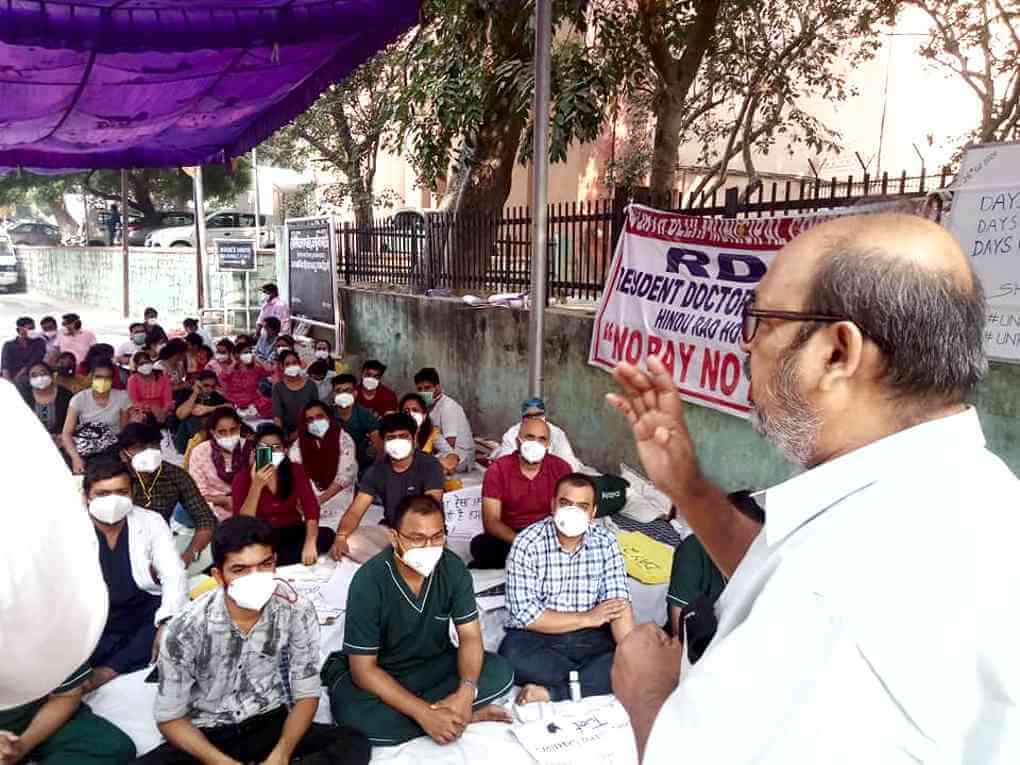 Workers as well as doctors in Delhi are troubled and distressed by the Central government’s ‘shower petals, snatch away rights’ politics and the Delhi government’s attitude of brushing off all responsibility. Today workers affiliated to AICCTU protested at different places in Delhi in support of Hindu Rao Hospital doctors’ and workers’ demand for payment of due wages. AICCTU demands that the Central and Delhi governments stop playing passing-the-buck and immediately pay the wages due to the doctors on hunger strike and the agitating workers.

AICCTU State Secretary Surya Prakash met the Hindu Rao Hospital doctors and expressed solidarity. The doctors have not received their salary for four months now and are on hunger strike. The governments have no money to pay their salaries but they have the money to stage dramas for ‘honoring Corona Warriors and Frontline Workers’ and for spending huge amounts on advertising the PM’s and CM’s faces on the roads, TV, radio and Internet. If government doctors and workers do not get their salary, obviously the poorest people will be the ones to suffer due to this insensitive attitude of the government. Ministers including the Union Home Minister and Delhi Health Minister got admitted in private hospitals for treatment, and this clearly shows that those in government are aware of their own failure in public health care. The conspiracy to shut down all institutions meant for the working class and the poor and destroy workers through privatization is continuing. AICCTU stands in solidarity with the doctors and workers of Hindu Rao Hospital and will support them in every possible way.