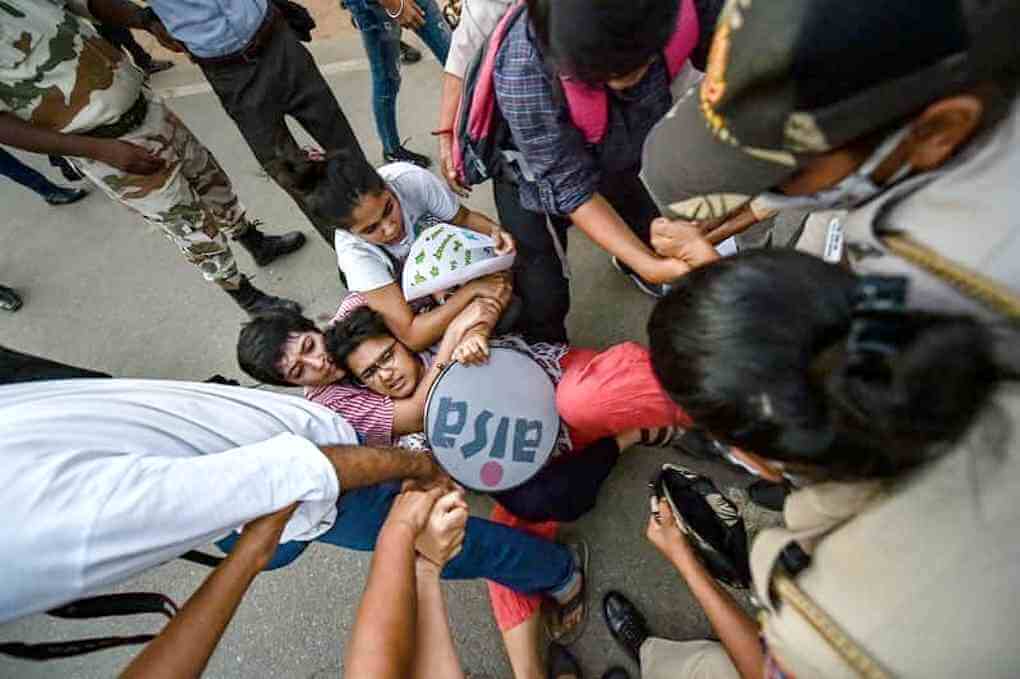 Uttar Pradesh under the rule of Chief Minister Yogi Adityanath has become a veritable hell and a nightmare of the worst kind for women and dalits. The growing violence against women and dalits shows the failure of the law and order system. The Hathras victim, a 19 year old dalit girl, was gang raped and murdered by men from the upper caste. The UP police illegally cremated her body against the wishes of her family and without the presence of family members. This clearly shows the kind of treatment given to dalits in Uttar Pradesh and how they are subjected to institutional discrimination. On 30 September AISA, AIPWA and other women and student organizations protested in front of UP Bhavan in Delhi to demand justice for the Hathras victim. As soon as the protesters reached UP Bhavan, the Delhi police showed their true form and started taking the peaceful protesters into custody. Students and activists including AISA Delhi State Secretary Prasenjit Kumar were detained at the Mandir Marg Police Station.

Despite attempts by the police to crush their voice, the protests continued at the Police Station. AISA activists along with other students continued to raise slogans inside the Mandir Marg premises and kept the protest going.

The protesters demanded arrest and action under the Prevention of Atrocities Act against UP CM Yogi Adityanath, UP Police and senior officials for secretly burning the victim’s body without the presence or consent of the family. They said that CM Yogi Adityanath cannot escape from giving an answer to the people of India. The UP police must be held accountable for illegally cremating the victim’s body.

A CPIML team visited Hathras on 7 October 2020 and met the family of the gang rape and murder victim. The team consoled the family and supported their demand for justice through an enquiry into the entire incident by a Supreme Court judge.

CPIML State Secretary Sudhakar Yadav said that on 7 October the team led by CPIML State Committee member and Western UP in-charge Nasir Shah met the victim’s mother Rama Devi, father Om Prakash, brother Satyendra, uncle Ramvir and neighbors. The CPIML team said that the family members of the victim are in considerable fear. The family is poor. Their poverty and the caste dominance of the accused have resulted in negligence as well as deliberate whitewashing by the administration. Neither was an FIR registered on time and nor was proper and timely medical treatment given. Despite this the Aligarh Medical officer has said that there are injuries showing rape.

Moreover, the victim’s body was burned in the middle of the night by the administration without the consent or presence of the family. The DM not only threatened the family, but also kicked family members. With the intent of hushing up the matter, initially opposition leaders and media were not allowed to meet the family. The entire village has been turned into a police post, but supporters of the accused persons are mobilizing and intimidating the victim’s family. The BJP leadership is standing in support of the accused persons. All this is happening at the behest of the government.

State Secretary Sudhakar Yadav said that the Yogi government is alleging a so-called international conspiracy to defame the UP government in order to divert attention from the government’s abysmal handling of the Hathras case. They are filing FIR upon FIR, and even journalists are being targeted. This is nothing but sheer oppression and tactics of diversion. He appealed to the people not to get diverted and intensify their fight for justice for the Hathras victim.

Based on the team report, he made the following demands: FIR against the DM and the then SP (now suspended) and punishment for them; strict punishment to the guilty persons; proper security to be provided to the victim’s family; stop mobilization of the supporters of the accused persons and the victim’s family being intimidated and threatened by them; withdrawal of cases filed against political workers who protested against the incident; stop repression of journalists; resignation of CM Yogi who has failed miserably to ensure security of women in the State, as seen by the heinous incidents at Hathras, Balrampur, Bhadohi, Azamgarh and other places.

CPIML, CPM, CPI and other Left parties organized statewide protests in Uttar Pradesh on Gandhi Jayanti 2 October against the increasing violence and rapes including the horrific gang rapes and murders of Hathras and Balrampur, and demanded the resignation of Chief Minister Yogi Adityanath. The police arrested Left leaders and cadres protesting near the Gandhi statue at Hazratganj in the capital Lucknow. The arrested leaders included CPM State Secretary Hiralal, CPIML State Standing Committee member Ramesh Sengar, State Committee member RS Maurya, Manju (AIPWA), Madhu Garg (AIDWA), Rajiv Kumar (RYA), Chandrabhan, Madhusudan (AICCTU) and Ravi Mishra (CITU). The police detained them all at Eco Garden where the protesters resumed their dharna. In the evening they were all released.

Through the statewide protests Left parties demanded the resignation of Chief Minister Adityanath, strict punishment for the perpetrators of the Hathras and Balrampur incidents, and strict action against the officials who ordered the mid-night cremation of the Hathras victim without the presence or consent of the family, the DM who intimidated the girl’s family, and the SP who was negligent in taking action.

Earlier, on receiving news of the Hathras victim’s death on 29 September the CPIML Uttar Pradesh unit issued a statement in Lucknow conveying deep grief and anger against the heinous gang rape and the death of the victim during treatment at a Delhi hospital. CPIML holds the Yogi government accountable for the growing violence and barbaric acts against women, especially dalit women. Savarna feudal forces and dominant sections are sky high in confidence under the Yogi regime. These forces are attacking weaker sections, especially dalits. CM Yogi’s police are continuing and escalating their insensitive attitude in matters of violence against women; and when it is a matter against dalit women, getting a hearing and action becomes even more difficult.

The Party statement also pointed out that while the entire country was grieving over the horrific gang rape and barbaric murder of the Hathras victim, another heinous gang rape and murder of a 22 year old dalit girl at Balrampur shocked the entire nation. Dalit women have been the target in both these cases. Government records show that Uttar Pradesh under Yogi rule is the topmost in the country in cases of violence against dalit women. The NCRB (National Crime Record Bureau) confirm these statistics.

The role of the police and administration in the Hathras case is extremely suspicious. The reluctance to register an FIR and the way in which the body was burnt in the middle of the night without the presence or consent of the family points to a criminal attempt to white-wash the truth and destroy evidence. A judicial enquiry must be conducted to bring the truth to light. The time for demanding that the Chief Minister improve the law and order system is past; now is the time to demand resignation of the Chief Minister.

AIPWA also organized strong protests against the perpetrators, police, administration and Yogi government and paid tributes to the victim at Banaras, Lakhimpur Kheri and Deoria.​