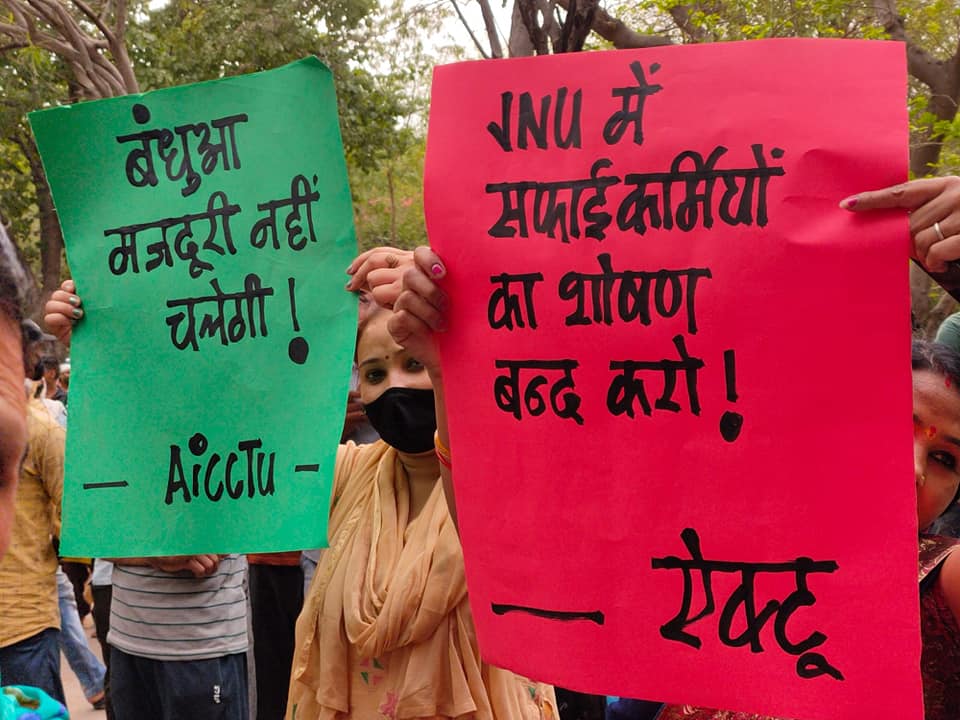 JNU administration must immediately ensure payment of salary of sanitation and mess workers!
Stop the retrenchment of workers in JNU! No to violation of workers' rights!
In an atrocious order dated 5.5.2022, Delhi based Jawaharlal Nehru University ,(JNU) administration has declared Sucheta De, former JNU Students' Union (JNUSU) President and present National Vice President of AICCTU (All India Central Council of Trade Unions) out of bounds [ban order] from the campus. The order, signed by JNU proctor and mentioning the approval of the Vice Chancellor, says ‘In view of undesirable activities’ by Sucheta, she has been declared out of bound. Today morning, when she was entering the campus to be a part of an ongoing agitation of workers in the campus, she was physically stopped from entering the campus. Such an order is arbitrary and illegal. The move by JNU administration is an intimation tactics to break the workers' struggle for justice.
As a Trade Union leader Sucheta De had been active in exposing the blatant violation of workers' rights by JNU administration-company nexus. Contractual workers of JNU are being made to work without salary for several months, which is gross violation of Payment of Wages Act and it tantamounts to enforcing bonded labour in the campus.  Despite repeated intimations by the AICCTU and workers, the JNU administration refused to take any action.
Since May 4th, the sanitation and mess workers of JNU under the banner of AICCTU are on sit-in demanding immediate payment of pending wages. The JNU student's union have also joined in solidarity with the workers' movement.
Apart from denying salary to workers, JNU administration have been reducing the number of workers in campus since 2020. This has resulted in massive pressure of over work on existing workers. Arbitrary retrenchment of workers continue unabated. Number of workers are reduced based on whims and fancies of the company, and the JNU administration continues to favour the profit mongering of the companies at the cost of life and livelihood of the workers.
Sucheta and  AICCTU have been standing with workers s in their struggle for wages and rights. As an act of vindictiveness, the JNU administration has declared her Out of Bounds.
The workers are demanding that at least the salary for two months should be immediately released. Futhermore, the workers are opposing the reduction of work days. A written assurance should be given that the workers will be paid within 7th of every month. The workers also want the implementation of equal pay for equal work.
CPIML condemns JNU administration's 'Out of bounds' order against Sucheta De! We demand JNU administration to immediately ensure payment of pending wages to the workers, end illegal retrenchment of workers and end the on-going violation of workers' rights!
- CPIML Liberation