In Fear Of Defeat BJP Plays With Fire 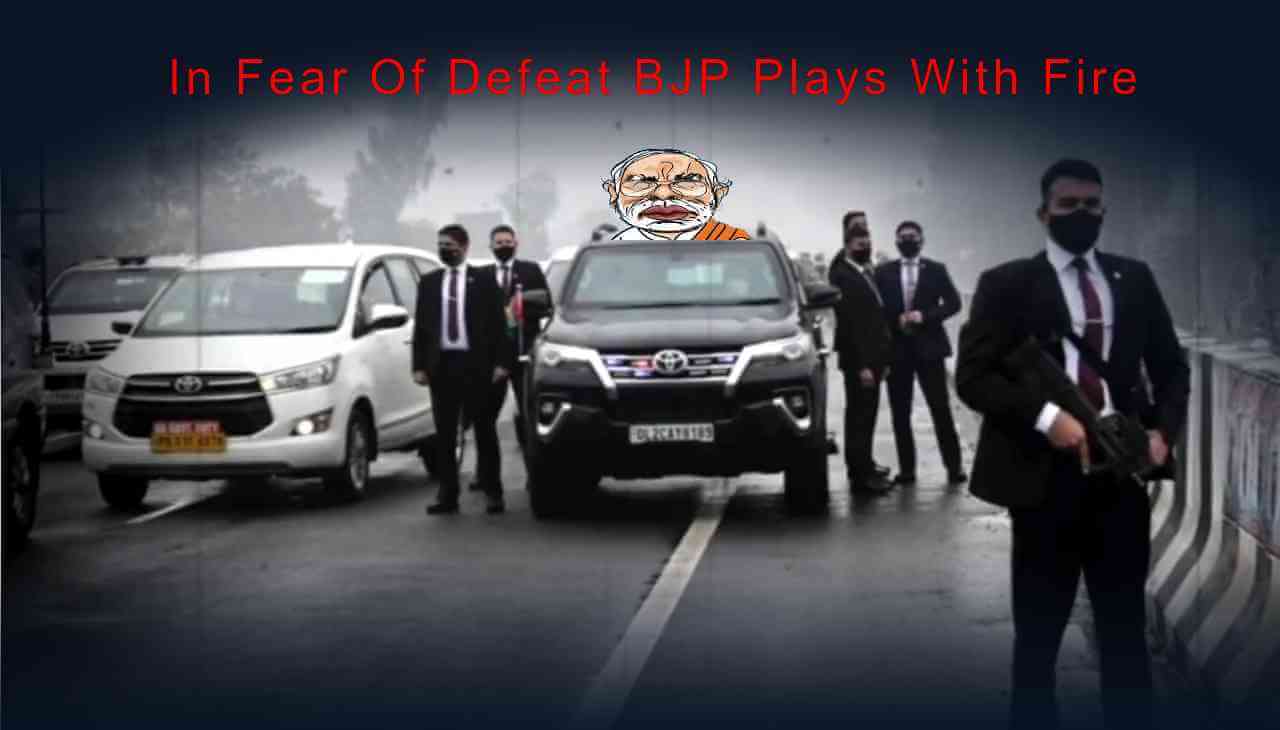 BJP and its leaders can scent defeat in the upcoming Assembly Elections in several states. The impact of the farmers’ movement victory; unprecedentedly severe unemployment and price rise; defection of a key BJP leader in UP to the rival SP: all these are signs that the Modi regime and the BJP are able to read very well.

Its fear of defeat is pushing the BJP to adopt desperate measures. The Prime Minister’s “security breach” gimmick betrays this desperation. The PMO claims that a farmers protest on a Punjab flyover was a conspiracy engineered by the Congress Government of Punjab to endanger the PM’s life. But the facts do not add up. It is not the Punjab police but the SPG, a force controlled by his own Central Government, that takes decisions about the PM’s travel route. Moreover, it is clear that supporters of the PM were much closer to his cavalcade than the protestors. Also, the farmers’ protest had been ongoing long before the State Government could have learned of the PM’s and SPG’s decision to travel by road. The protestors could not have known of the PM’s road travel or his route when they gathered at the protest spot. The Prime Minister has cancelled physical rallies on many occasions in the past. On this occasion why did he insist on taking a long road route when inclement weather made helicopter travel unsafe? Was the whole episode manufactured in order to create a diversionary discourse towards elections, or even to create a pretext for conducting elections under President’s Rule in Punjab as demanded by BJP’s Haryana Chief Minister? Many rightwing Twitter handles including one belonging to a BJP MLA from Bithoor in UP threatened to reenact “1984” (i.e a massacre of Sikhs) in the wake of the claims of a “security breach” in Punjab. By stoking anti-Sikh, anti-Punjab, and anti-farmer sentiments for electoral returns, the BJP is reopening deep wounds and playing with fire.

Meanwhile, UP Chief Minister Yogi Adityanath is explicitly seeking to turn the Assembly Elections into a war of the majority Hindu community against the minority Muslim one, by declaring that the elections are now “a battle of 80% vs 20%”. The Deputy CM of UP Keshav Prasad Maurya, asked by a BBC interviewer about the calls for genocide of Muslims at “Dharam Sansads”, began by defending the genocidal speeches, then lost his temper, snatching the Covid-19 mask from the reporter’s face and asking his security men to delete the cameraperson’s footage. All these are further signs of the BJP’s desperation.

In the Assembly elections, it is the people who are the most consistent and reliable opposition. This people’s opposition must accept the challenge to firmly resist and rebuff the violent threats to Muslim and Sikh minorities; build a rock-solid unity of farmers and workers across all boundaries of faith and community; refuse to let the BJP divide the nation on communal lines; and keep the elections focused on the key issues of “kheti, kamai, padhai, davai, mahangai”: agriculture, jobs, education, healthcare, price rise.