Dombari Diwas: Protests across Bihar against Attacks on Adivasi Rights 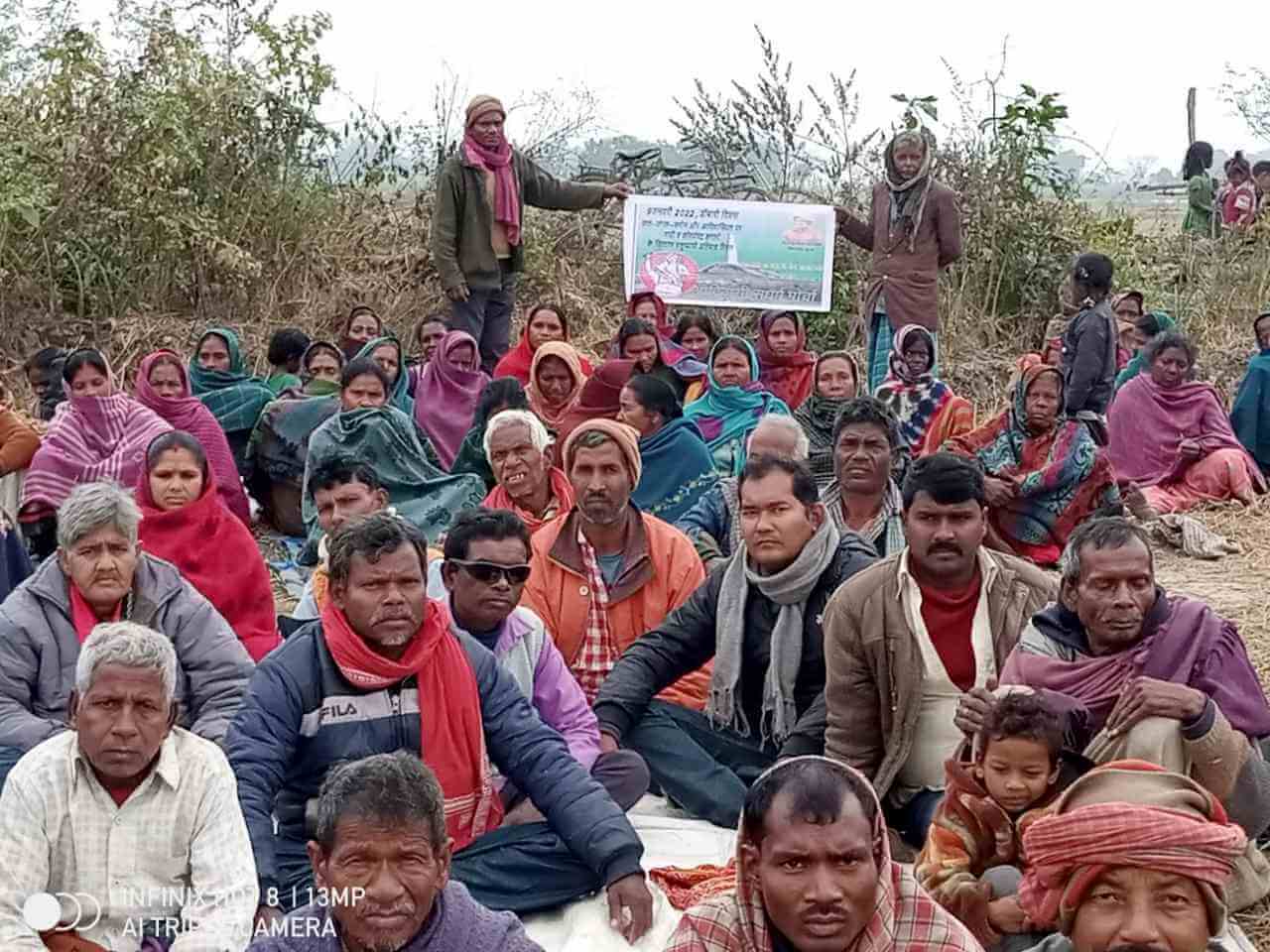 On 9 January Dombari Diwas, protests were organized across Bihar against corporate and RSS attacks on adivasi rights. Dombari Diwas was observed and protests held in response to the call given by the national level Adivasi Sangharsh Morcha formed at the initiative of the CPIML. After the partition of Bihar a considerable portion of the adivasi community went to Jharkhand but there is still a large presence in Districts such as Western Champaran, Kaimur, Jamui, Purnea. Protests were organized in these Districts under the Adivasi Sagharsh Morcha banner.

Giving information about the Adivasi Sangharsh Morcha, Bihar State Secretary Kunal said that the agenda for which the Morcha was formed includes: implementation of the 5th Schedule of the Constitution in all adivasi areas against corporate loot and grabbing of adivasi lans; ending attacks on adivasis by the Forest Department, police and armed forces; and implementing the Forest Rights Act 2006 to the letter. In this light, this Morcha (Front) will soon be formed at the Bihar level also.

It will be remembered that it was on this day, 9 January 1900 that thousands of Munda adivasis led by Ulgulan Nayak Birsa Munda and armed with bows and arrows and other traditional weapons gathered together at the Dombari Buru hillock for ending the British Raj. Meanwhile, spies had already informed the British police about the gathering of the Mundas. The British police and army surrounded the hill from all sides. A fierce battle between both sides ensued. Thousands of adivasis led by Birsa Munda fought with unparalleled bravery. The British were blasting gunfire and canons and Birsa Munda and his supporters were showering arrows from their bows. Innumerable adivasis were gunned down ruthlessly in this battle at Dombari Buru. The true numbers are not known even today. According to a news report published in The Statesman dated 25 January 1900, 400 people were killed in this battle. It is said that the Dombari hillock was drenched in blood as a result of this massacre. Corpses were strewn everywhere and water in the Tijna River that runs close-by was red with blood. Though the British won this battle, the revolutionary Birsa Munda eluded their grasp. This was a massacre done by the British even before they perpetrated the heinous Jalianwala Bagh.

Today adivasis are facing the biggest attack on their identity and rights post-independence. Pro-corporate government policies have given free license to companies to loot natural resources and adivasis' water, forests and lands. Corporate capture and eviction are being imposed on adivasis in the name of mines, dams, national parks and reserve forests. Across Central India, adivasis are being thrown out of their lands in the name of so-called 'development projects'. On the other hand, adivasis in the North-Eastern States are being victimised at the hands of the armed forces through the misuse of the Armed Forces Special Powers Act (AFSPA). A recent example of this is the massacre of 14 adivasis by the armed forces in Nagaland. In South India adivasis have been denied the Constitutional protection of the 5th Schedule.

Zamindari and usury are the twin weapons for making adivasis helpless slaves across the country. Adivssis are kept out of basic education and health services. Any adivasi protest is branded as an anti-development and anti-national act and crushed through brutal repression and well-planned persecution. In addition to this state repression and exclusion from the economy, adivasis also have to face lethal cultural attacks. RSS is engaged in a continuous conspiracy to divide adivasis on the basis of religion.

It is in this situation that today adivasis are fighting a determined battle to protect their cultural identity and Constitutional rights against the ongoing corporate and communal onslaughts, zamindari and usury. On this special day of Birsa Munda's Ulgulan, Dombari Diwas, the Adivasi Sangharsh Morcha pledges to intensify the struggle for adivasi rights against oppression and corporate slavery.