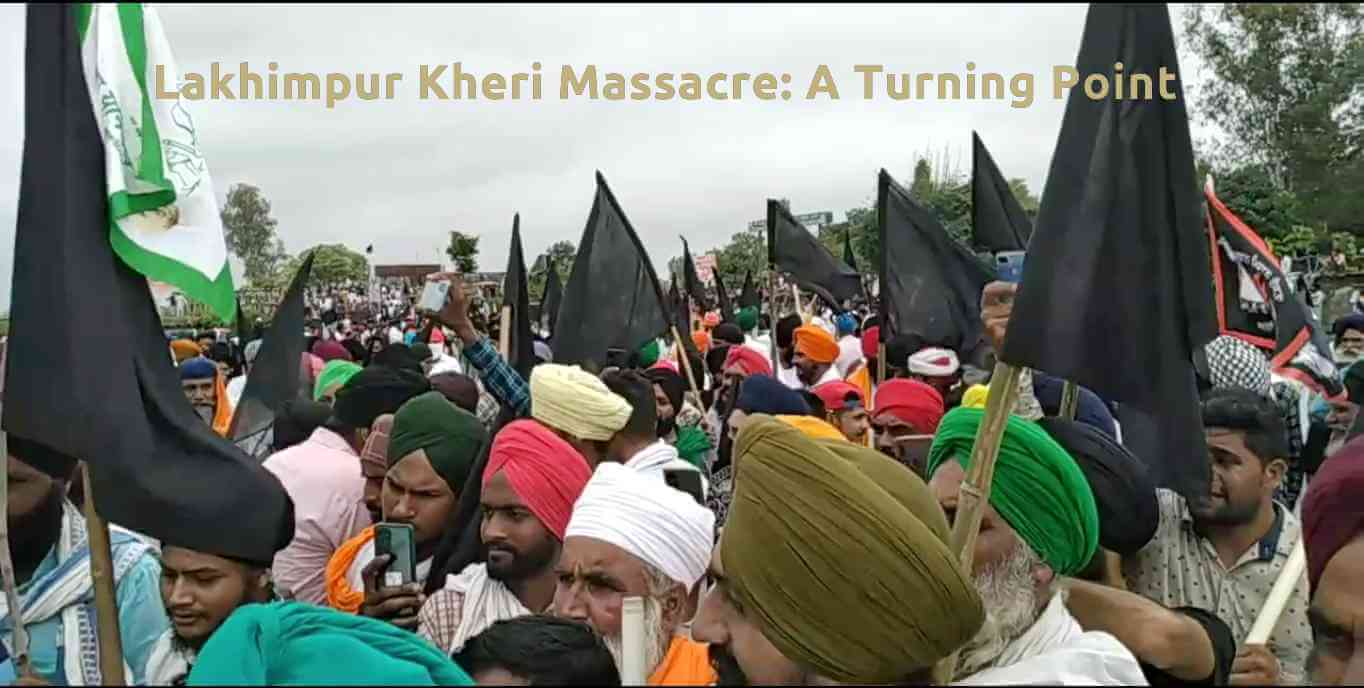 The massacre of farmers at Lakhimpur Kheri is the latest instance of barbarism towards farmers by BJP leaders and regimes. In a murderous act of calculated cruelty, Ashish Mishra, the son of local criminal-turned Union Minister of State for Home Affairs Ajay Mishra ‘Teni’, led a convoy of vehicles to mow down marching farmers. Eight persons including four farmers, a journalist and a driver were killed in this horrific violence. Reports suggest that not only did Ashish Mishra and his men mow down the farmers, they also fired pistols to kill farmers. The violence at Lakhimpur Kheri followed on the heels of statements by Ajay Mishra inciting violence against the protesting farmers.

Ever since the farmers’ movement began the BJP has tried every trick to suppress it. Yet, every move has backfired and ended up expanding the scope of the movement. To begin with, the BJP sought to dismiss the protests as politically motivated and restricted to Punjab. The farmers marching to Delhi were stopped at Delhi’s borders by violent policemen and barbed wire. The ensuing siege ended up consolidating the unity of Haryana and Punjab farmers, with the former providing food and other necessities to help the farmers camp at the borders of Delhi. The 26 January crackdown that attempted to clear Delhi’s borders of farmers, ended up galvanising the farmers of Western UP to throng to the protest site as well as to farmers’ rallies in the region. The Lakhimpur Kheri massacre now promises to be a turning point in Uttar Pradesh, with outrage against the brutal killings sweeping all over the state.

As the BJP failed to get the farmers’ movement to back down or die out, its desperation has increased, leading to repeated violent outbursts. At Karnal, we saw the sub-divisional magistrate (SDM) ordering his men to “break the heads” of protesting farmers, followed by bloody assaults on farmers. Worse, we have now seen the Chief Minister of Haryana, Manohar Lal Khattar telling cadres of his party to “Form groups of 500, 700, 1,000 people and make them volunteers. And then at every place, do tit for tat. Do not worry...When you remain there (in jail) for a month, three months or six months, you will become big leaders. Your names will be etched in history.” At Dhalpur in Assam, the BJP regime’s murderous drive to evict poor Muslim farmers by branding them “Bangladeshi”, ended up killing a man and a child and brutalising the man’s body. Ajay Mishra’s threats followed by his son’s spree of murders is part and parcel of this wider agenda of violence and intimidation.

The farmers’ protests have already forced the Uttar Pradesh Government to buckle down over the Lakhimpur Kheri massacre: agreeing to pay compensation to the families of the victims and to register an FIR that implicates Ashish Mishra for murder and Ajay Mishra ‘Teni’ for conspiracy. In spite of the BJP’s bluster and the attempts by propagandist media to blame the farmers for the violence, then, the UP Government has been forced to concede key elements of the truth.

It is telling that Ajay Mishra ‘Teni’, with a long track record of violent crimes, was handpicked to serve as deputy to Home Minister Amit Shah, who himself boasts of a similar record. Now that ‘Teni’ has been named in an FIR for conspiring to unleash a murderous assault on farmers, how can be allowed to stay in his post? The demand to sack him is gaining momentum with every passing day.

The Modi, Yogi, and Khattar regimes can unleash as much violence as they like – it will only serve to underline their own desperation and the farmers’ determination. The whole country must stand with farmers as they demand the sacking of Ajay Mishra, justice for the farmers killed, punishment for the murderous BJP regimes from Assam to UP to Haryana to Delhi, and the repeal of the farm laws.