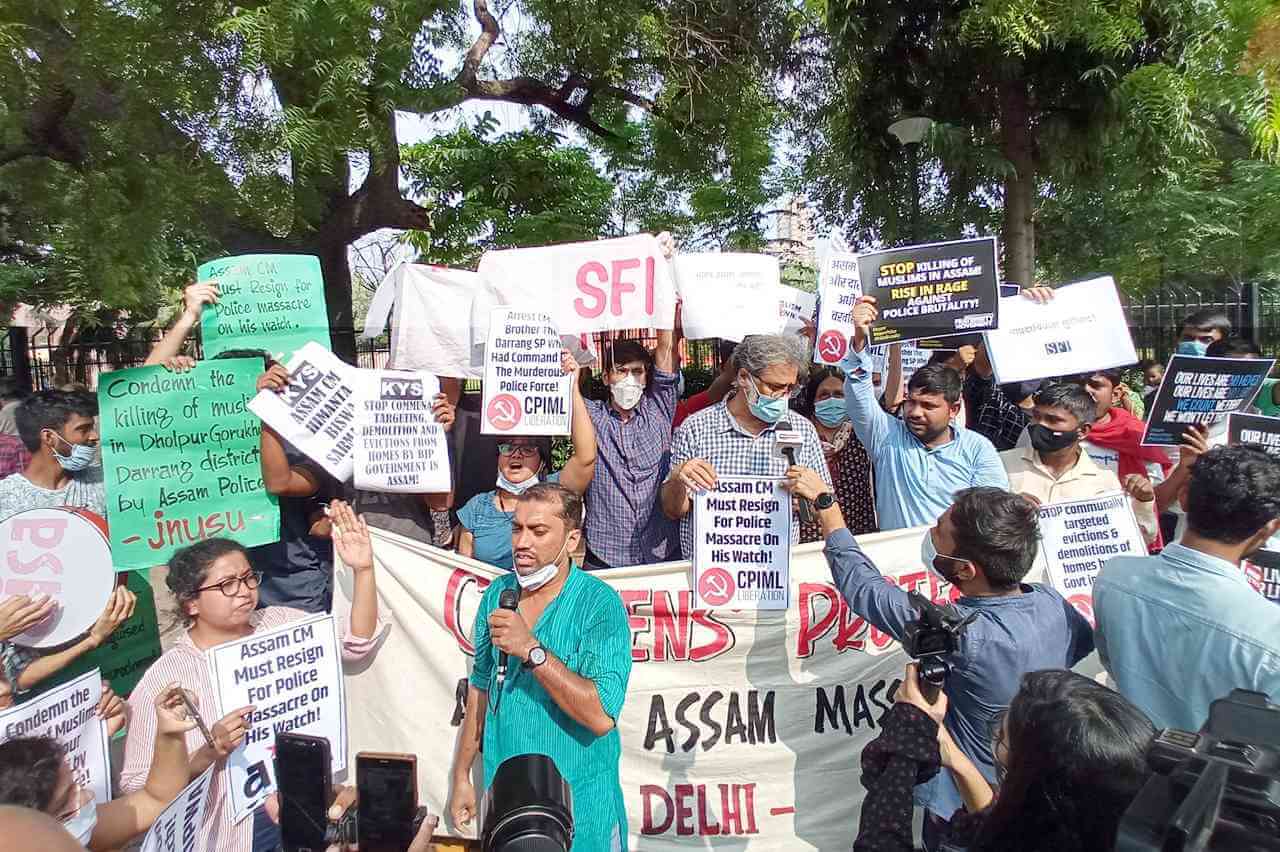 The communally motivated evictions and killings of innocents in Assam received widespread condemnation across the country. Protests were held against this incident in the capital New Delhi, in West Bengal and at many other places. CPIML General Secretary Dipankar Bhattacharya addressed protesters gathered a Assam Bhawan in New Delhi on 25 September, where he demanded resignation of Assam Chief Minister and called for strong resistance against the mischievous designs of perpetrating communal divisions in Assamese society through hate filled propaganda and state sponsored violence by the BJP.

The Assam units of the CPI(M), CPI, CPI(ML), Asom Gana Morcha and RJD met on 23 September and jointly issued a statement on the inhuman eviction drive being conducted by the Assam State administration at Dholpur-Gorukhuti area under Sipajhar Revenue Circle of Darrang district in Assam. The five parties condemned the police brutalities and firing in the name of evictions. The Parties demanded a judicial inquiry into the incident by a sitting judge of the Guwahati High Court, immediate halt to the eviction drive and rehabilitation of all the evicted families and adequate compensations to the families of those killed and injured. It is condemnable that the state administration branded local Muslim people who have been residing in the area for several decades as 'suspected foreigners' and 'illegal encroachers of government land'. The administration has evicted Muslim families of the locality in most inhuman manner and the eviction drive is communally designed, illegal and unconstitutional. The Parties also condemned the provocative and communally sensitive utterances of the Assam Chief Minister Himanta Biswa Sarma who has been leading the aggressive hate campaigns to create tensions and polarise the society in Assam on communal lines.

At a citizens' protest in Patna organized by the AIPF, CPIML Politburo member Dhirendra Jha said that the killing of a Muslim man (in Darrang, Assam) who had been living on his land for the last 40-42 years, and the cruel euphoric celebration on his dead body are a shameful blot on humanity. This killing done at the behest of the government is the most contemptible example of the BJP-Sangh's declared agenda to reduce Muslims to secondary citizens in the country. The protesters pledged to carry on the struggle against this injustice. CPIML, AISA, RYA and AIPWA activists also participated in the protest. The meeting was addressed by PUCL State Secretary Sarfaraz, renowned physician Dr PNP Pal, teacher Ali Adnan, PUCL leader Kishori Das, cultural activist Vinod, AIPWA General Secretary Meena Tiwari, KD Yadav, Abhyuday, MLA Gopal Ravidas, Chandrakanta Khan, Vijayshri Dangre, Shashi Yadav, Umesh Singh, Abhay Kumar Pandey, Ranvijay Kumar and Rajendra Patel. The speakers said that we must all unite against the politics of hate and defeat the BJP's divide-and-rule policy.