Stand with the People of Afghanistan 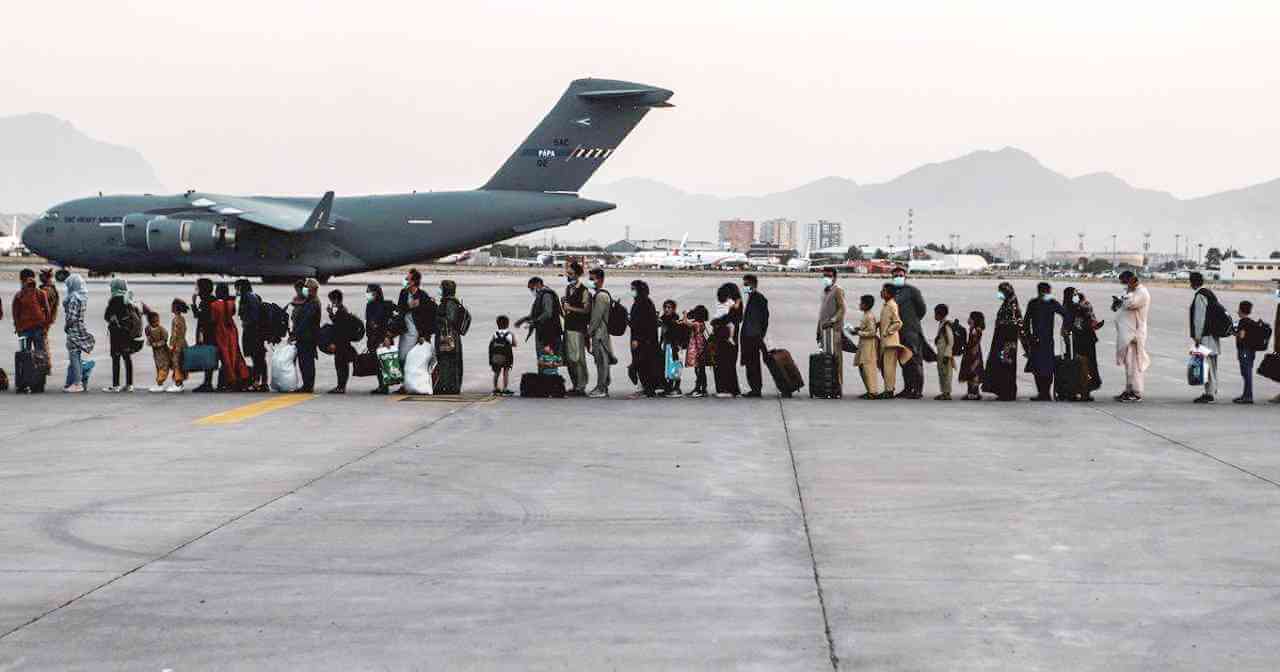 The exit of American forces from Afghanistan, the concomitant collapse of the US-backed regime headed by Ashraf Ghani and takeover by the Taliban, which should really be called a negotiated transfer of power by the US, have dramatically changed the situation in Afghanistan. With the Taliban attacking a wide spectrum of Afghan people, large numbers of people are desperately trying to flee Afghanistan. Scenes of hundreds of people crammed into cargo planes and clinging to the doors of aircrafts as if they were overcrowded buses and trains, with at least two persons, a doctor and a footballer, falling off a plane to their horrific death, testify to an utterly chaotic, uncertain and fearful transition now underway in Afghanistan. The Taliban has made clear its intention to exercise total control over the lives of the people, rolling back women’s rights, terrorising women, religious and ethnic minorities and protesters and even refusing to hold elections in Afghanistan.

The current mess in Afghanistan is in the first place an American creation. America’s argument that it cannot go on looking after Afghanistan and has now exited to respect Afghanistan’s right to shape its own future is as blatant a lie as was its previous claim of restoring peace and democracy in Afghanistan. Not only has the US occupation itself left behind a terrible toll of suffering, we should also remember that the pull-out of US forces has happened according to a plan negotiated between the US and the Taliban. While much of it must have been in the realm of back-channel negotiations, part of it has been in the public domain as the US-Taliban pact since early 2020. The pact is a classic example of American chicanery and hypocrisy.

The pact signed in Doha on February 29, 2020 was titled “Agreement for Bringing Peace to Afghanistan between the Islamic Emirate of Afghanistan which is not recognized by the United States as a state and is known as the Taliban and the United States of America”. The pact and the negotiations that preceded it kept the US-backed Afghanistan government and the allies of the US all excluded from the process. It spelt out a roadmap for withdrawal of US troops and release of Taliban prisoners, which explains how the Taliban had already been ready to capture power as soon as the Americans left Afghanistan. The current situation in Afghanistan can thus only be described as a negotiated transfer of power where the US chose the Taliban as its trusted successor to protect its interests.

The pact only got the Taliban to ‘commit’ not to let the Afghan soil to be used for any terrorist activity against the US and its allies. So the American concern over terrorism is explicitly limited to protecting only the security of the US and its allies. The Taliban regime between 1996 and 2001 was also notorious for its reign of domestic terror, ruthless attacks on women and religious and ethnic minorities and systematic violation of basic human rights and democracy. The US and its allies habitually describe human rights and democracy as ‘western standards’ (even as they blatantly undermine them), the military invasion and occupation of Afghanistan by the US and its allies was in fact named ‘Operation Enduring Freedom’, but any mention of these so-called western standards or values is conspicuously missing in the pact.

The Modi government too has to answer for the present situation in Afghanistan. All these years we were told that India was playing a major role in the reconstruction of Afghanistan and was gaining recognition internationally for its contribution to the strengthening of peace and stability in Afghanistan. And now the Modi government has gone totally silent about the developments in Afghanistan, and has even closed down the Indian embassy in Kabul, even as BJP leaders have found a new destination for dissenters in India: ‘Go to Afghanistan’! Yogi Adityanath, whose own regime has earned the worst kind of notoriety in India for the treatment meted out to women, children, Muslims, Dalits and common law-abiding peace-loving citizens, sheds crocodile tears in the UP Assembly for Afghan women and children, using the Taliban as a code word to unleash a virulent campaign of hate and humiliation against Indian Muslims.

Can the Taliban be expected to behave any differently from its previous term? The scenes we see in Afghanistan do not inspire any confidence or hope about a reformed and restrained Taliban rule. The fear and desperation writ large on the faces of Afghan women, children and workers and employees tells us very clearly about the mood in Afghanistan as the prospect of an uncertain and fearful future looms large. The least the international community must ensure is an inclusive interim arrangement where non-Taliban forces also have due space and the holding of early elections under the monitoring of the United Nations to enable the Afghan people to determine their future. With the US having thrown its weight behind the Taliban which also owed its initial rise to American patronage, other political forces and trends in Afghanistan are of course at a disadvantage; yet we can see protests growing in Afghanistan against the terror and tyranny of the Taliban. The people of Afghanistan deserve full support and solidarity of freedom-loving people across the world in their quest for a just peace guaranteeing safety, dignity and rights for all, in particular Afghan women and religious and ethnic minorities.

What can we in India do immediately in support of the people of Afghanistan? Afghan citizens currently studying or working in India should be given an extended visa and not forced to return to Afghanistan till peace and stability are restored there. Students will need an extension of their fellowship programme and/or conversion of their visas to work visas so they can find jobs and some steady income to manage their expenses. Afghan citizens seeking refuge in India must be welcomed and granted asylum without any discrimination. This situation once again exposes the absurd and divisive nature of the CAA where non-Muslim applicants from Afghanistan are prioritised for the granting of Indian citizenship, and the same discrimination is now being applied in the granting of visa to applicants from Afghanistan. There are even reports of social media users being booked under UAPA in Assam for welcoming the return of the Taliban to power in Afghanistan. Persecuting Indians or Afghans residing in India for their opinions on the political situation in Afghanistan will be a negation of justice and human rights in India – all the more outrageous because it is being done in the name of the tyranny and violation of human rights by the Taliban.

With elections to UP and several other State Assemblies round the corner, the Sangh-BJP brigade is trying its best to use the Afghanistan crisis to intensify its campaign of Islamophobic hate and violence. Already we have seen the government’s attempt to utilise the 74th anniversary of India’s independence to reopen the wound of Partition in the name of remembering its horrors, the Afghan crisis is being used as an add-on to reinforce the notion of Hindus and India being in danger. The Sangh brigade’s own attitude to the freedom and rights of Indian women is as regressive as the Taliban model; and its paradigm of governance combining draconian laws and extra-judicial terror is no less tyrannical. The Sangh campaign against the Taliban is driven by not any respect for women, children or human rights, it is just another opportunity for the Sangh to demonise the Muslim community. While extending support to the Afghan people’s quest for peace, justice and democracy we must boldly expose the complicity and contribution of the US and its allies, including India, to the current mess in Afghanistan and combat every attempt to foment Islamophobia by shedding crocodile tears for Afghan women and children.