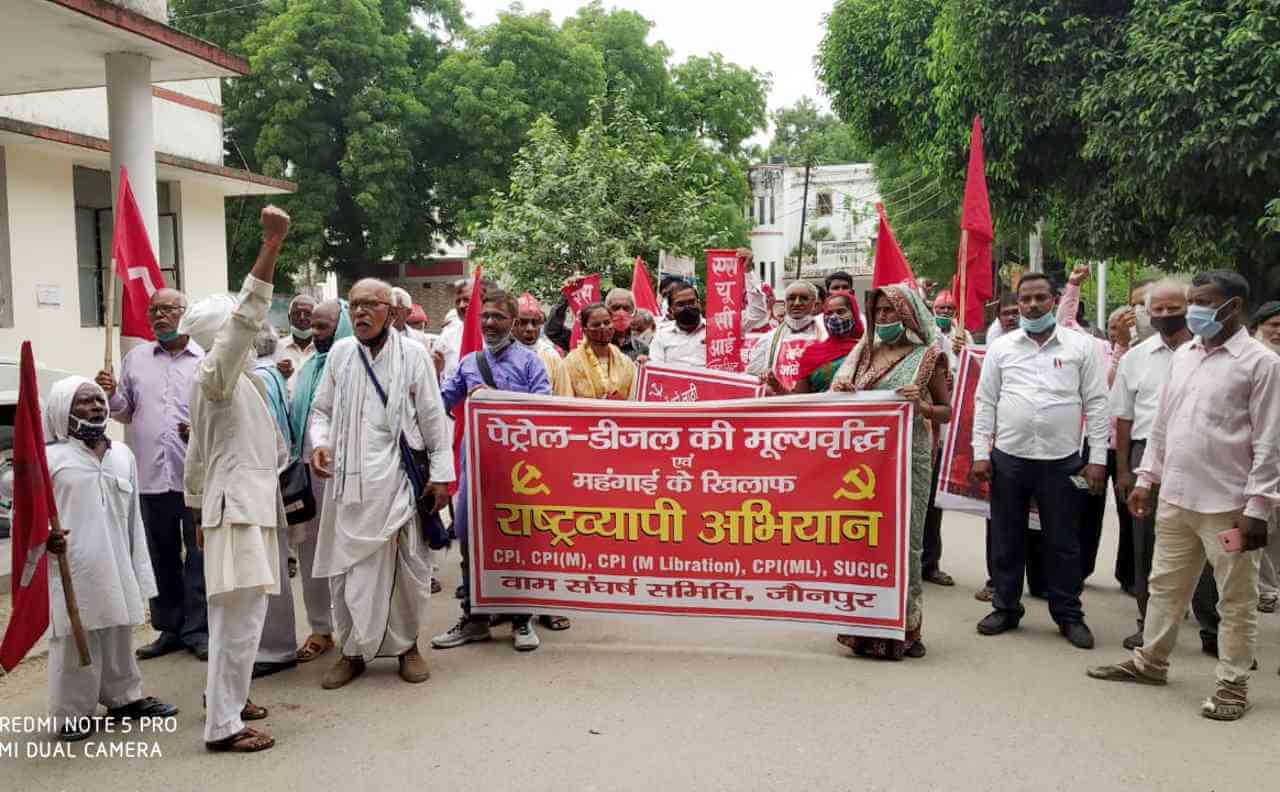 The District level protests were organized in Bihar against spiralling prices of petrol, diesel and food items.

In UP, the protest march at Lucknow started from Parivartan Chowk and proceeded to Ambedkar Chowk but was stopped on the way by the police. A 7-point memorandum addressed to the President was submitted to the ACP. The march was led by CPIML District in-charge Ramesh Singh Sengar and leaders and activists from CPIML, CPI, CPIM, Forward Bloc, SUCI, AICCTU, RYA and AIDWA.

Protests were held and memorandums to the President submitted at various Districts including Ballia, Azamgarh, Mau, Azamgarh, Ghazipur, Chandauli, Jaunpur, Banaras, Kushinagar, Mirzapur, Sonbhadra, Bhadohi, Allahabad, Sitapur, Basti, Ayodhya, Kanpur, Jalaun and Mathura. The protests at various Districts were attended by leaders and activists from Left parties. Through the protests it was demanded that spiraling prices of petrol, diesel, LPG and essential commodities should be immediately rolled back, Rs 10 lakhs compensation should be paid to families of all those who died in Covid times, and the anti-democratic ploys employed by the Yogi government to kill all voices of dissent in the UP District Panchayat elections should be stopped.

Left parties in Jharkhand organized statewide protests on the beginning of the protest fortnight on 18 June. CPIML, CPIM, CPI and MSS activists protested with full Covid protocol for hours at Albert Ekka Chowk in Ranchi against price rise. They held posters and placards with slogans against hiked prices of edible oil and other food items as well as petrol, diesel and cooking gas, and told the government that crony capitalism and betrayal of the country would not be tolerated by the people. Addressing the protest, CPIML State Secretary Janardan Prasad said that Covid and spiralling prices are both 'gifts' bestowed on us by the Modi government's 'Achhe Din' (Good Days). The government must stop looting the people already hit by the Covid pandemic. CPIM leader Prakash Viplov said that the Modi government should resign if it cannot stop inflation. CPI leader Ajay Singh said that hiking petrol-diesel prices every second day is a conspiracy to benefit corporate companies and if the government does not stop this immediately it should be ready to face an intensified movement. Present at the protest were CPIML leader Bhuneshwar Kewat, Sukhnath Lohara (CPIM), Sushanto Mukherjee (MSS), Mohan Dutta, Nandita Bhattacharya, Pushkar Mahto, Akash Ranjan, Noreen Akhtar, Praful Linda, Anirban Bose, Rajendra Das, Mewa Oraon, Rani Singh, Bhim Sahu, Tarun Kumar, Shwet Kamal and others.