AICCTU Statement: In Solidarity with June 10 General Strike in Greece! 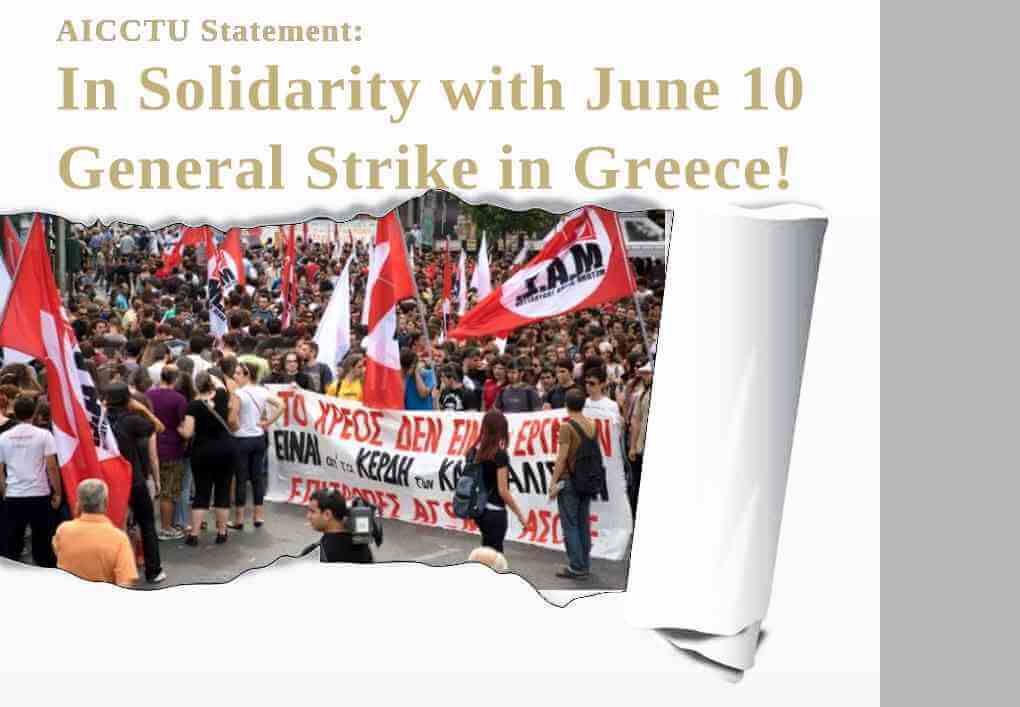 The working class and toiling masses of Greece will embark on an historic General Strike on June 10 against the anti-labour Bill proposed by the conservative New Democracy (ND) government. The Bill introduces several anti-worker measures, including increasing the working hours from 8 up to 10 hours per day,  scraping the five-day working week and curtailing the right to strike. The proposed bill is a barbaric attack on the rights of the workers, hard earned through long struggles.

The COVID-19 pandemic has completely exposed the exploitative capitalist system and its profit-hungry nature. The governments in various capitalist countries are shamelessly using the ongoing COVID-generated crisis as an opportunity to snatch rights of the working class and ensure windfall profits to the bourgeoisie.

In India, the far-right Narendra Modi government has scrapped the existing labour laws and arbitrarily introduced new labour codes in the name of “ease of doing business”, which is just a sugar-coated name for carte blanche exploitation of workers. These codes combined, similar to the new labour bill in Greece, attack the 8 hour work day and curtails the right of workers to organize, collectively bargain and strike. The trade unions in India, along with the farmers’ organisations who have been protesting continuously against pro-corporate farm laws for the last six months, are together resisting the anti-worker and anti-farmer policies of the government.

All these measures are nothing but an attempt to push workers and toiling masses into slavery.

AICCTU on behalf of the working classes in India extends its unwavering support with the working class of Greece and their resistance against the anti-worker Bill. We extend our solidarity with the General Strike on June 10 in Greece called by PAME and class unions.