Pay Compensation to Dependents Instead of Hiding Covid Deaths 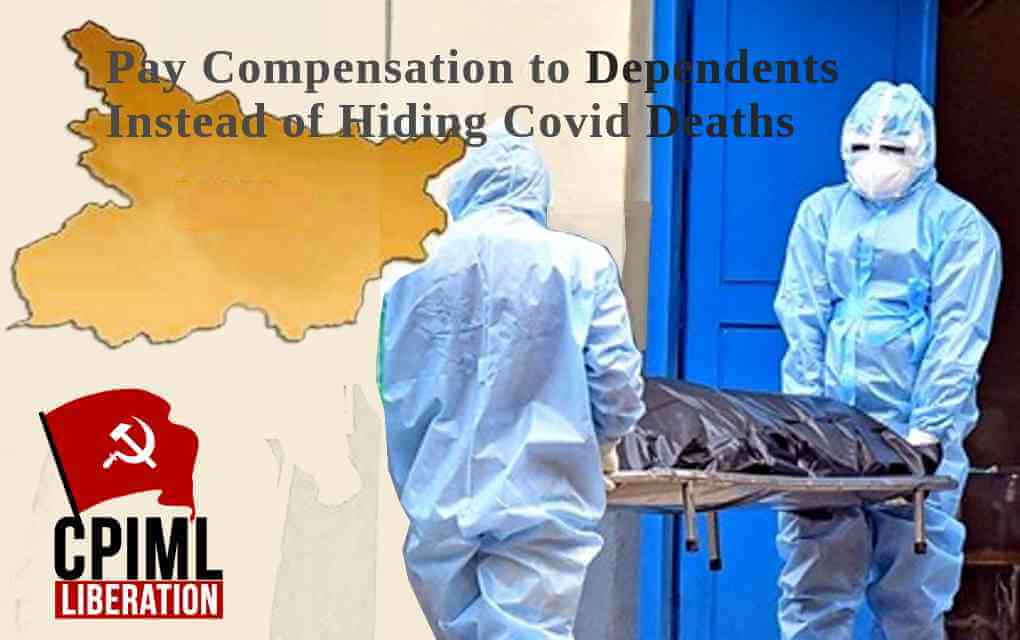 CPIML Bihar State Secretary Kunal said on 31 May 2021 that the Bihar government should compile a list of all those who died of Covid and guarantee compensation payment of Rs 10 lakhs without delay to all the dependents. There are reports of 40-45 deaths from every village. Presently our party is enquiring into Covid deaths across the State and will soon submit a report to the government.

He said that the prima facie statistics that have emerged so far are horrifying. We have reports of 46 deaths in Kulhadia (Koilvar), 14 deaths in Ekvari (Sahar), 20 in Dhangawa (Tarari), 14 in Dumaria (Tarari), 21 in Bagar (Tarari) and 14 deaths in Bandhwa (Tarari). These figures will rise if a deeper enquiry is done, but the above figures are not being reflected anywhere in government statistics. This means that the government is hiding death statistics. What does the government wish to prove when entire families are getting wiped out and children are being orphaned? If there is even a shred of sensitivity left in the government they should enquire honestly into every village and compile a list of the dead.

Comrade Kunal said that there are several deaths where all the Covid symptoms were found but which did not test positive either in Rapid Antigen or RTPCR tests. There are also many who had cold and cough but never went to hospital and died while getting treated by the village doctor. Many also died due to lack of treatment as hospitals stopped treating other diseases and transport was also difficult. The government should arrange to find the cause of death across the State, especially in rural areas.

He further said that under pressure from the people the government has announced Rs 1500 monthly aid to orphaned children, but this is inadequate. We demand that the government should take full responsibility for the upbringing of these children because the government's criminal negligence has caused the death of such a large number of people.

He expressed grave concern over scams in Covid testing. People can now clearly see what the BJP-JDU's 'Aapada mein Awasar' (Opportunity in Disaster) policy means. Earning money through testing scams while the people struggle for basic health facilities is the worst inhuman act. Such a scam is not possible without political protection. For the past several years the health department has been under BJP control, meaning that the useless Health Minister Mangal Pandey is chiefly responsible. The entire department is in the clutches of corruption and ruin. The people of Bihar have been consistently demanding this incompetent Minister's removal but Nitish Kumar in his greed for power is bent on completely ruining Bihar's health system. We reiterate our demand for Mangal Pandey's removal as Health Minister and a high level enquiry into the political protection given to the Covid scam.