Stand With Farmers Against The Modi Regime’s Shameful Assault 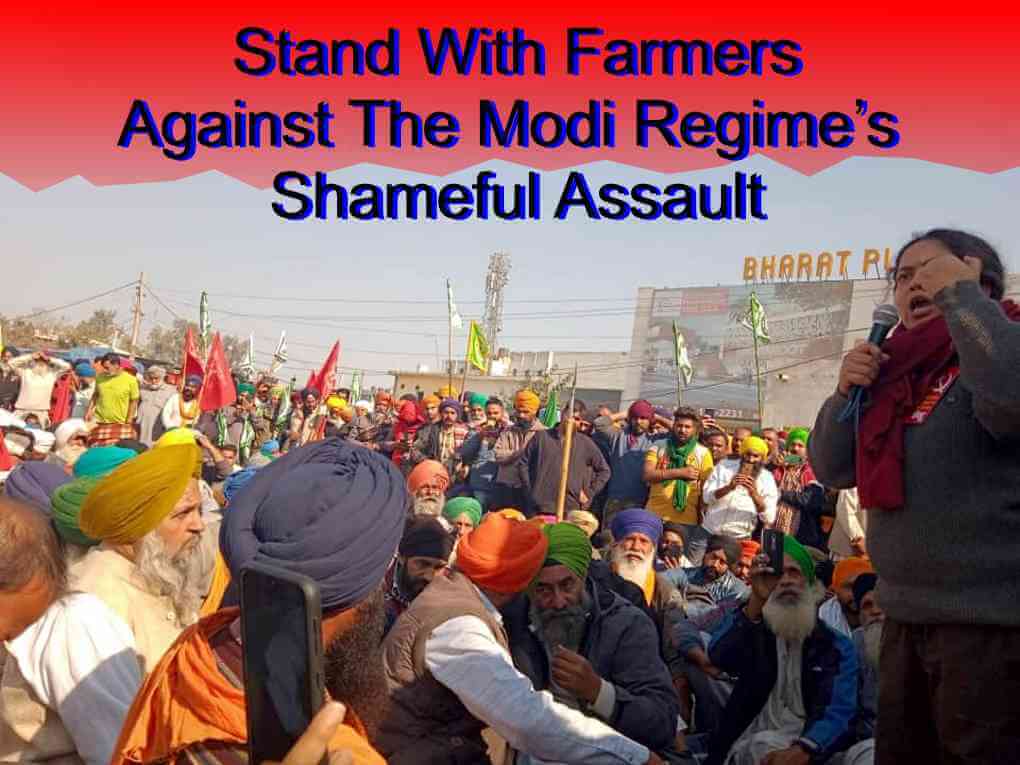 IN an unprecedented, historic protest, lakhs of farmers are camped at Delhi’s borders, demanding a rollback of the three anti-farmer, pro-corporate laws forcibly and illegally imposed by the Modi regime. The farmers, marching to Delhi, were met with a violent assault by the police. The protesting farmers, after breaking through the barricades and braving tear gas and water cannons, have since then camped at the borders of the country’s capital city, blockading the national highways. They have, rightly, refused to oblige the Government by moving from the highways to the remote grounds at Burari in Delhi.

The Modi regime and the ruling BJP has responded to the farmers’ agitation in entirely predictable ways. Following a stale script we have already seen used against the equal citizenship protests and student protestors, its propaganda machinery tried to claim that the massive farmers’ movement was backed by “Khalistani terrorists” in a nexus with opposition parties. This propaganda has proved a failure, and the farmers have received warm solidarity from all sections of society.

As the BJP’s pet “celebrities” and media groups continue to spit invective at the farmers, the Prime Minister himself declared that the government’s intentions were “pure as the Ganga.” The farmers, he claimed, were being misled by vested interests. In the first round of talks with farmers, the government took its cue from the PM. It offered to set up a panel to “discuss” the farm laws. Such “discussions” with farmers should have taken place before enacting laws relating to farmers. At the current stage, the government “panel” seems intended to try and “educate” the farmers that the farm laws are in their interests. Farmers’ representatives have rightly rejected such a proposal and have demanded nothing short of the repeal of the three farm laws.

It is thoroughly insulting to farmers to suggest that they need to be “educated” about the laws that affect farming. When it comes to farming, it is farmers who are the experts – and they can clearly see that the three new laws place them at the mercy of corporate interests. While the Government claims the laws “free” the farmers, the fact is that the laws free the government of any obligation to support farmers and farming. The laws give corporations the freedom to hoard essential food commodities and thus manipulate prices and markets.

The Modi regime stands exposed as a broker, an agent of big corporations, out to break the back of India’s farmers and the country’s food self-reliance. The ongoing farmers’ movement began on 26 November: the same day as a historic workers’ all India strike against the dilution of labour laws which leave workers at the mercy of bosses and corporations. 26 November is also Constitution Day – the day that the people of India “gave to themselves the Constitution of India.” The workers’ strike and the ongoing farmers’ movement are in continuity with the equal citizenship movement against the CAA-NPR-NRC – defending people’s rights and India’s Constitutional democracy against the fascist BJP regime.

The farmers sit-in on the highways at Delhi’s borders is rightly being called the new Shaheen Baghs. Shaheen Baghs were women-led sit-ins to defend equal citizenship. They were vilified as “terrorists”, “rioters”, “break India gang” and “women for hire” by foul-mouthed BJP leaders who themselves instigated violence against the protestors. Today the farmers’ sit-ins are being subjected to the same abuse and slander. In 2016, it was students of Universities who were slandered and abused in the same terms. It is time the students, youth, farmers, workers, women, all people of India came together to give a fitting rebuff to such BJP propaganda. Protesting citizens are the life-blood of democracy. A government that brands protests as “anti-national” is the enemy of democracy. We must all stand in support of India’s farmers against the authoritarian and anti-farmer Modi Government, and demand the repeal of the three new farm laws.