The Farmers’ Protest Continues in the National Capital 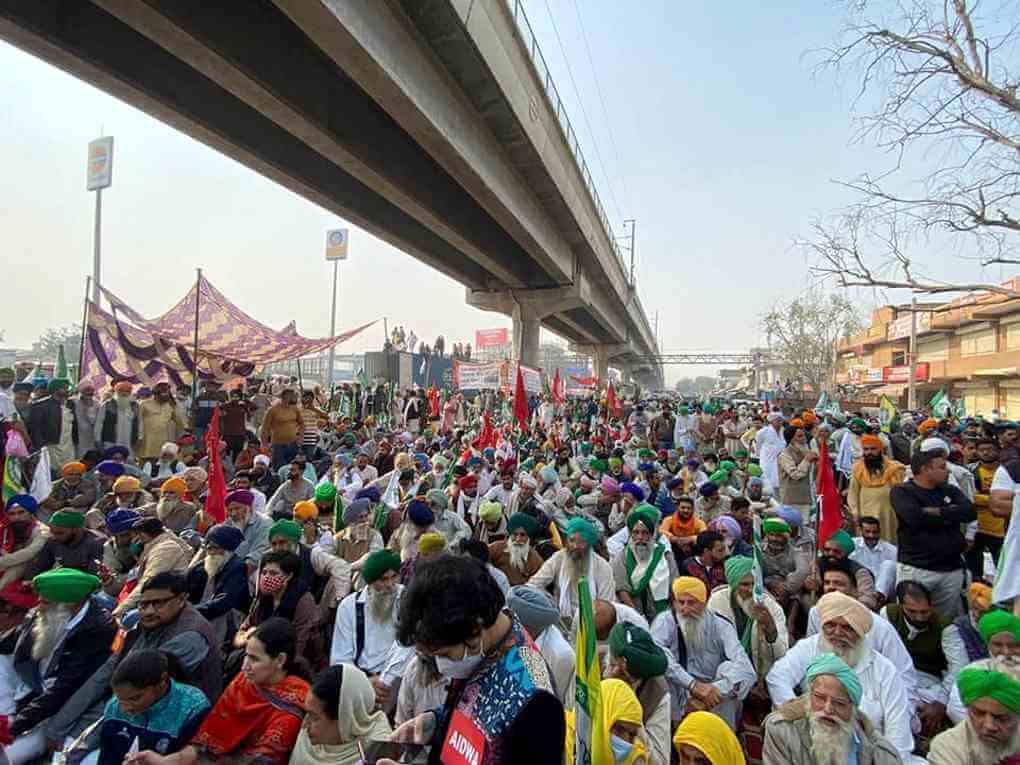 Farmers gathered on the highways at Delhi’s borders are receiving full cooperation from the people of Delhi and Haryana. Many industries, commercial buildings and residential homes near the road at Tikri  Border in Delhi have opened their toilets and bathrooms for the free use of the protesting farmers gathered on the Delhi-Rohtak highway. Several people are distributing tea, bananas and other fruits. It is difficult to estimate the number of farmers gathered on the border. The line of farmers’ vehicles, in three rows, is kilometers long. At present this is their dharna venue as well as their home.

Thousands of farmers led by All India Kisan Mahasabha National President Comrade Ruldu Singh have also gathered at this spot, as are the huge number of farmers from the Punjab Kisan Union affiliated to the All India Kisan Mahasabha. The line of farmers’ vehicles is about 60 km long. By the evening of 29 November more farmers joined those already there. Most of the farmers’ tractors have two trollies containing food materials and bedding. This time the farmers have come prepared for a long battle. They say that they prefer to be on the highway rather than in some sponsored ‘maidan’ (ground) in Delhi.

On 29 November AISA and AICCTU activists and CPIML Delhi organized a primary health camp for the farmers gathered at the Delhi’s Singhu border. The medical camp is running since then well being attended by hundreds of farmers who need primary medications and first aid.

Many local doctors have set up first-aid help stalls at the Tikri  border. This was also appreciated that some of the local nursing homes are not taking consultation fees from the protesting farmers. Local residents have set up stalls to prepare food like puri, sabji, rice and kadhi for the farmers. Traders at the Bahadurpur Sabji Mandi have announced free vegetables for the farmers.

The teams of AISA are staying with the farmers, and doing ‘wall-writing’ in their support.

Along with the farmers from Punjab, farmers from various districts in Haryana are also camping at the Tikri as well as Singhu borders. Farmers from UP, mainly western UP districts and also from other states have joined them too. At the Gazipur border of the capital western UP farmers have started picketing.

This is the same Delhi-Bareilly highway on the Delhi-Uttar Pradesh border where two years ago there was a clash between the police and farmers. The BKU (Tikait) is camping here since 28 November under the ‘Dilli Chalo’ call given by 500 farmers’ organizations. On 27 November they blockaded three highways connecting Delhi and Uttar Pradesh. BKU President Rakesh Tikait told that there will be a huge congregation of farmers at this border on 3 December. Farmers are being told to come with long-term preparations. Here also the local people are distributing bananas, biscuits, samosas, bread pakodas, buttermilk and water bottles. Cooked food arrives from the villages on tractors. The local Gurudwaras are also providing food.

A delegation of Left parties submitted a memorandum to the President through the Udaipur District Collector against the police repression by the Central government on farmers on their way to Delhi, and supporting the demands of farmers’ organizations. Speaking on the occasion, CPIML State Committee member Saurabh Naruka said that the Left parties strongly oppose the police repression unleashed by the central government against farmers and appealed to the President to hear the demands of the farmers’ organizations in a democratic way and end the police repression immediately. CPM District Secretary Pratap Singh said that Left parties stand in full support of the farmers’ demands for scrapping of the 3 new anti-farm laws, fixing crop prices according to the Swaminathan Commission recommendations, loan waivers, and guarantee of governmental crop purchase. CPI leader Suresh Chandra Sen demanded that pattas should be distributed to adivasis for forest lands under the Forest Rights Act. Prof RN Vyas of the Jantantrik Vichar Manch said that the new farm laws have been brought to hand over agriculture to corporate houses. By changing the Essential Commodities Act, these laws are legalizing black-marketing. They are also ending the system of MSP by handing over crop purchase to private mandis, and are pushing farmers into slavery by giving free license to contract farming.

In solidarity with the struggle of farmers in the country and opposing government repression against farmers, All India Kisan Mahasabha organized a protest at the Lalkuan Tehsil. Speaking on the occasion AIKM State President Anand Singh Negi said that the farm laws brought by the Modi government are anti-farmer and anti-people and their main intent is to expand corporate control over our food system. Farmers across the entire country have come out in a surge against this in a forceful and decisive movement. He appealed to all sections of society to come out in support of the just demands of our food-providers.

AIKM Nainital District President Bahadur Singh Jangi said these three anti-farm laws and the Electricity Bill 2020 will ruin farmers, markets and food supply will be solely in the hands of corporate companies. CPIML District Secretary Dr Kailash Pandey said that the Modi government has rained repressive brutality on farmers protesting against the anti-farm laws, with tear gas, water-canons and lathi charges. A memorandum was sent to the Prime Minister of India through the dharna.