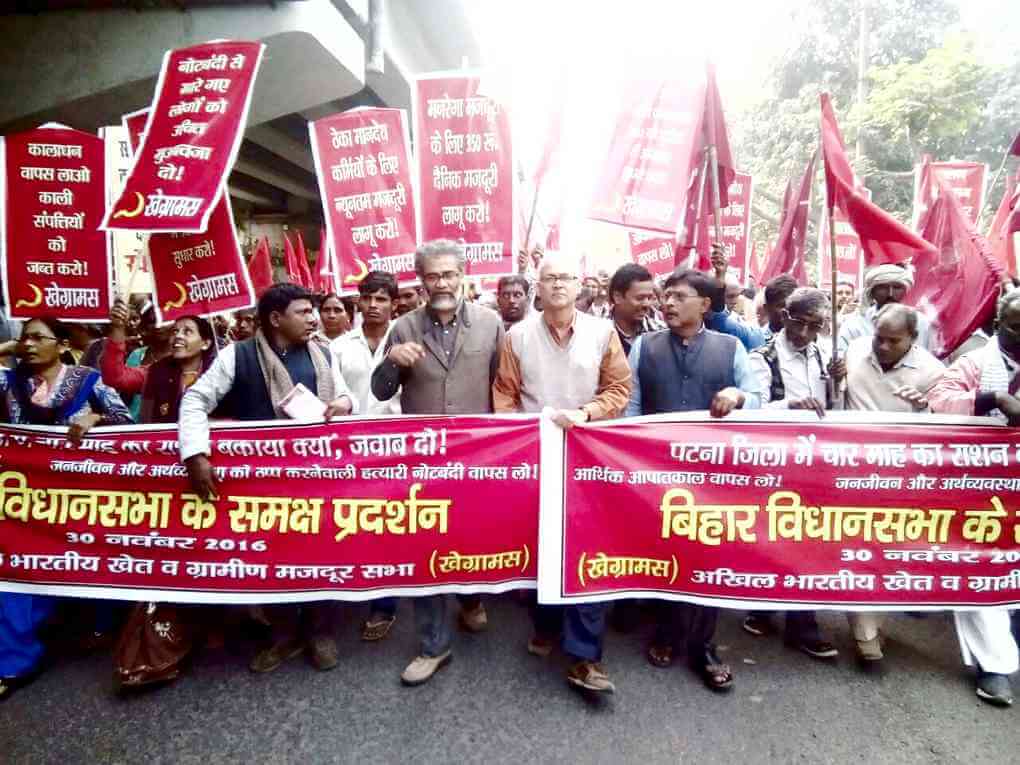 CPIML organized a countrywide protest day on 30 November against the brutal repression unleashed on farmers on their way to Delhi. The three draconian anti-farm laws passed by the Modi government undemocratically in Parliament are being opposed by farmers and all sections of people in the country. The repression let loose by the central government as well as Haryana’s BJP government was opposed in all states through people’s protests. Protests and Modi-effigy burnings by the CPIML and Kisan Mahasabha were held in all major centers.

The protest was massive in Patna where CPIML General Secretary Dipankar Bhattacharya addressed the protesters.

Addressing the meeting CPIML General Secretary said that a single issue has shaken the entire country today. For the past few days farmers have surrounded the Delhi border from all sides. It appears as if the Modi government is fighting a war against farmers. The farmers’ anger has not erupted all of a sudden. The manner in which the three laws were passed by murdering the Constitution and democracy made the build-up of anger inside farmers explode. Today farmers across the country are agitating against these laws.

The farmers’ criticism of these three laws is totally correct. These are policies that will ruin agriculture and make farmers into corporate slaves. The Essential Commodities Act prevented the black-marketing of essential goods like potatoes and onions, but now the door for that has been thrown wide open. Now capitalists will buy farm produce at cheap rates and sell them at high rates and earn bloated profits.

The demand of farmers was that the government should guarantee Minimum Support Price. The Swaminathan Commission had recommended the price to be fixed at 1 ½ times crop-production price, but the government is implementing that only on paper. This is unconscionable treachery against farmers.

The government has ended Mandis (APMCs). We have seen the disastrous result of ending Mandis in Bihar where they were abolished in 2006 under the Nitish regime. If ending Mandis were to bring prosperity to farmers, the farmers of Bihar would be prosperous today. But the farmers of Bihar are in the worst conditions of poverty. The people have declared that they will not allow farming in the country to go the way of Bihar where Nitish Ji has destroyed agriculture.

The government is saying that the Opposition is instigating the farmers to protest. But the Opposition in Punjab comprises Akali Dal, BJP, and AAP. The entire Punjab is standing with farmers. An Akali leader has even resigned from the Cabinet. Therefore, the Modi government should stop insulting farmers and spreading false propaganda against them. Farmers of Punjab are the most developed farmers. Hence they are the first to understand the reality of these draconian laws and have come out in protest.

The manner in which the government tried to stop the farmers is murder of democracy. This government which came to power by getting farmers’ votes has broken all laws and rules and regulations. In Haryana the Khattar government dug up roads so that farmers could not reach Delhi. Despite brutal repression, lakhs of farmers have gathered around Delhi.

He further said that this is a ‘Shaheen bagh’ of farmers in the making, against the Modi government’s draconian agriculture policies. Workers are struggling against anti-worker changes to labor laws. The people of the country are fighting against the Citizenship Amendment Act. Now farmers have risen up against these three anti-farm laws. The need of the hour today is for all the sections to help one another and set upon the Modi government in a decisive struggle. The farmers of Bihar, like everywhere else in the country, are angry against this government. CPIML activists will take this movement to each village and hoist the flag of freedom everywhere.

Leader of Legislative Party Mahboob Alam said that since the Modi government has declared war, farmers stand firmly in the battlefield. No amount of brutal repression can prevent them from reaching Delhi. The meeting was also addressed by Comrades Meena Tiwari, RN Thakur and others.