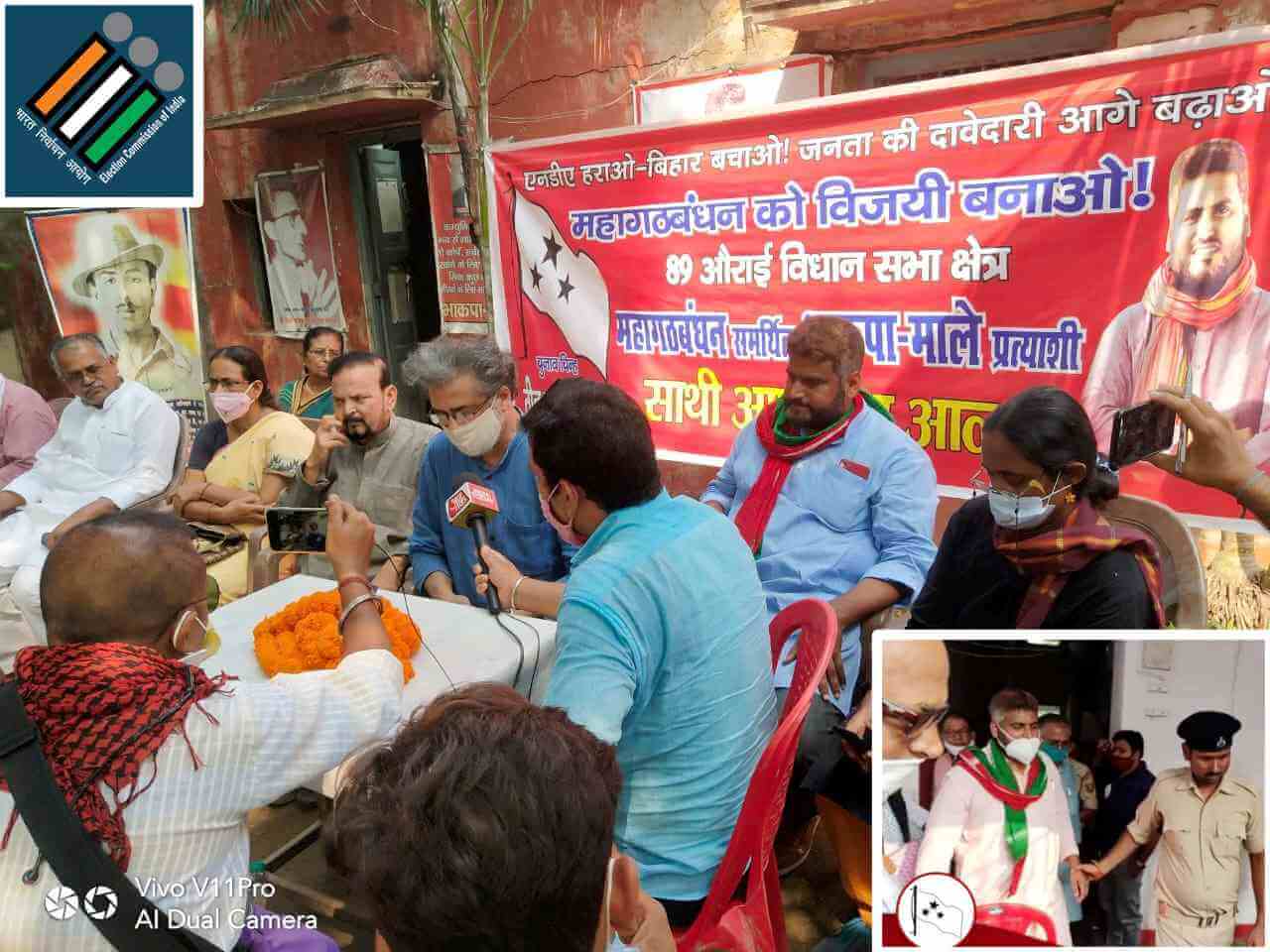 CPIML has complained to the State Election Commissioner against attempts to spoil the image of the Party and its Aurai Assembly candidate Aftab Alam through fake news propagated by ruling political parties and certain media organizations. A delegation comprising Politburo member Kavita Krishnan and Central Committee member Meena Tiwari met the State Election Commissioner (CEO) on 20 October on this issue and demanded strict action against this defamatory propaganda.

BJP Bihar has put up a malicious post on its Facebook page against CPIML Aurai candidate Aftab Alam saying that he is an accused person in the 2013 Patna bomb blasts. This is totally fake news and a malicious act of defiling his image. This post says that CPIML has given a ticket to a person guilty of perpetrating the bomb blasts during the PM’s rally in Patna. This is entirely false news. Comrade Aftab Alam’s name is nowhere in the FIR filed in the said case, a copy of which has been given to the Election Commission also.

Similar fake news is also being aired on news portal News18 Bihar and a rightwing portal. The CPIML delegation demanded from the EC that action should be taken against these portals also. The Party said that if the fake news is not removed and a public apology tendered to the Party, a defamation case will be filed against these Facebook pages/news portals. Legal notices were sent to all three portals/Facebook pages after which News18 Bihar has taken down the fake story from its portal.

Party PB member Kavita Krishnan who is currently in Bihar said that the BJP-JDU alliance is trailing badly in this election and is resorting to such undemocratic and immoral practices to hide their frustration and desperation. She said that the people of Bihar would give a befitting reply to their despicable acts through the ballot and would teach a resounding lesson to BJP-JDU.

CPIML Bihar State Committee member and media in-charge Kumar Parvez told that the Twitter handle of Saurabh Pandey Shaurya, Editor of one of the portals propagating this fake news, TheChaupal, is followed  by Piyush Goyal, a Cabinet Minister in the Modi Government. Thus it is clear who wants to weaken democracy by encouraging such fake news and venomous propaganda. He said that such false propaganda by the BJP fake news factory will not help save the BJP from the questions to which the people of Bihar are demanding answers from the ruling parties.

Commenting on the issue, Comrade Aftab Alam said that his task is to fight for all deprived and oppressed sections of society and he will continue to do this work. He appealed to the people of Bihar to give a resounding victory with a huge margin to Mahagathbandhan candidates in all the constituencies.

Aftab Alam was Arrested after his Nomination

Aftab Alam, an office bearer of Insaf Manch Bihar and member of CPIML was arrestedfrom the Aurai Assembly constituency in Muzaffarpur while he was filing his nomination papers on 16 October. Neyaz Ahmed, vice-president of Insaf Manch has expressed anger and said that this arrest has been done as part of a BJP conspiracy. He said that the BJP has become worried at the tremendous support Aftab Alam is receiving from people across communities. It is this desperation that has led to Aftab’s arrest without notice right at the time of his nomination under a delayed case against him for a dharna against the murder by liquor mafia of a young man Dilip Rai. Neyaz Ahmed said that the people of Aurai would put paid to BJP’s hateful campaign and vote in huge numbers to send Aftab Alam to the Assembly.

Comrade Aftab was released on bail after of couple of days.