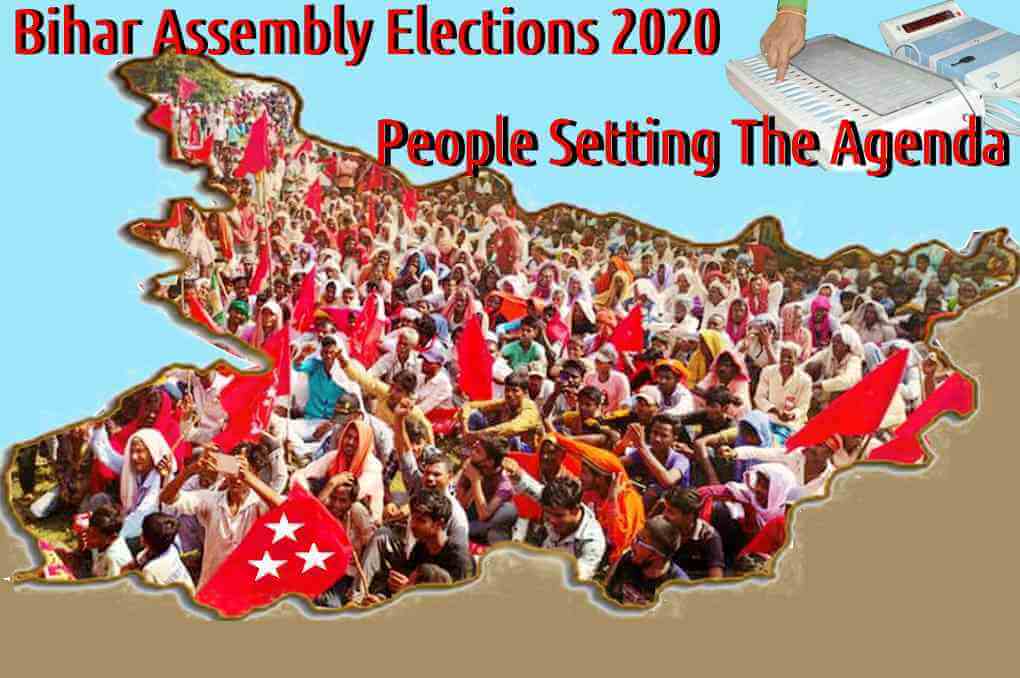 One of the most striking features of the Bihar 2020 Assembly Elections is the intense interest and involvement generated among voters by party and alliance manifestos. This time, it is the people of Bihar – its youth, workers, employees, women – who have put the questions of jobs, equal pay for equal work, rights and dignity at the centre of Bihar’s politics.

The campaign of the Grand Alliance (Mahagathbandhan) of RJD, Congress, CPIML, CPI, and CPIM is resonating with these urgent concerns of Bihar’s youth, with the concrete promise of filling up lakhs of vacant government positions as a first step towards tackling unemployment. The 25-point “Commitments for Change” charter issued by the Mahagathbandhan has focussed on creating jobs, filling up long-pending vacancies, ending exploitative contractual work and ensuring equal pay for equal work, spending more on education and healthcare, and protecting farmers from the anti-farmer laws passed by the Modi regime.

The NDA has derided the Mahagathbandhan’s commitment to ensure 10 lakh jobs, primarily by filling up pending government posts. The incumbent Chief Minister Nitish Kumar as well as various central BJP leaders addressing election rallies in Bihar, have ridiculed the modest promise of 10 lakh jobs as “unrealistic”. Yet, the BJP’s Manifesto promises 19 lakh jobs! If 10 lakh jobs is impossible, how will 19 lakh jobs be made possible? The mystery can be solved if we decode the Prime Minister’s promise of an “Atma Nirbhar” (self-reliant) Bihar and India. “Self-reliance” is basically a way of saying “fend for yourself”. People eking out survival through precarious means like “selling pakodas” is passed off by the PM as “self-reliant jobs”, while the Government shrugs off all responsibility to create jobs.

The BJP Manifesto crossed all limits of impropriety and shamelessness when it promised free Covid-19 vaccines to the people of Bihar. To make it worse, this promise was made by the Union Finance Minister. The Modi regime which failed to control the spread of Covid-19, and which subjected the migrant workers from Bihar to untold cruelties during an unplanned lockdown, now has the gall to seek votes in exchange for vaccines.

There is an unmistakeable groundswell of anger against the NDA regime that has ruled Bihar for 15 years, and that capped its misrule by arrogantly declaring that they would not allow migrant Biharis (who had walked hundreds of kilometres home during the lockdown) into Bihar’s borders. The BJP, even as it affirms that Nitish Kumar will be Chief Minister if NDA wins, is seeking in vain to insulate itself from that anger. The fact is that the BJP and JDU who swam together for 15 years, are bound to sink together.

The BJP’s attempts to stoke up divisive and hateful sentiments (over abrogation of Article 370, Ayodhya and so on) are falling cold on a Bihar electorate that is responding with enthusiasm and warmth to the Grand Alliance’s commitments to create jobs and protect the rights of workers and employees. When Yogi Adityanath tells his rallies that people of Bihar can now own a home in Jammu and Kashmir, Bihar’s poor remind him that the NDA regime has not allotted them homestead land that is due to them in their own state. Instead it has bulldozed the settlements of the poor.

Bihar’s elections, by putting jobs and rights front and centre in politics, and rebuffing communal and anti-democratic narratives, is setting the agenda for Indian politics beyond Bihar.