Assert Democracy On The Streets - Unite Against Draconian, Anti-People Laws 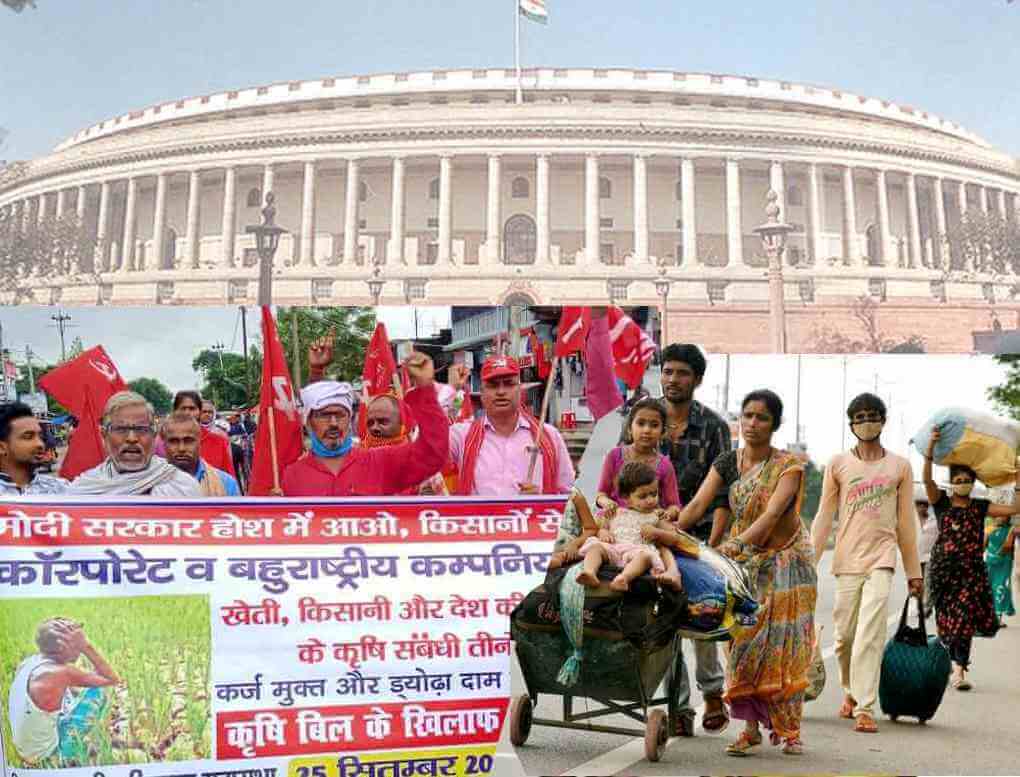 The just concluded monsoon session of Parliament shows a mirror to the farce to which the Modi regime has reduced parliamentary democracy.

Question Hour was arbitrarily cancelled - thus doing away even with the formal notion that the Government and executive is answerable to the legislature, to Parliament and by extension to the people.

In the most shameless display of contempt for democratic norms and conventions (let alone more substantive democratic values), farm bills which are fiercely opposed by the nation's farmers were declared "passed" in the Upper House, without being put to vote. The ruling regime claims that thanks to the ruckus by Opposition MPs, there was not enough "order" in the House to allow for a vote. The question arises - if there was not enough order for a physical vote, how come there was enough order for a voice vote? Rajya Sabha TV coverage of the proceedings was muted: this muting of the voices inside Parliament proves that even the "voice vote" was bogus.

Subsequently, Opposition MPs boycotted the Parliamentary proceedings, and the ruling regime went on to declare four Labour Code bills passed without any Opposition presence in the House.

The three Farm Laws toll the death knell for India's farmers and its primarily agrarian economy. The four Labour Code Bills strip most of India's workers of even the nominal safety net of labour laws, making it easy to hire and fire them. The Labour Codes pay lip service to protecting the rights of women workers and offering social security to vulnerable workers. But the Codes make unionisation nearly impossible: and workers know that laws and protections on paper are a farce in the absence of unions to fight for their implementation.

If democracy inside Parliament is dying, street protests continue to be the defiantly beating heart of India's democracy. On 25 September, farmers all over India blockaded streets and railroads in a massive Bharat Bandh that brought India to a grinding halt. Workers and youth everywhere supported the farmers. Farmers' wrath in Punjab forced the Akali Dal, long time partner of the BJP, to break ranks and leave the NDA.

The "chakka jam" (Road blockade) by farmers against the draconian and anti people Farm Laws is a reminder of another massive people's movement against the draconian and anti people CAA. Participants in that movement are today being framed as violent "rioters" because sections of women protestors held road blockades in Delhi. These protestors are being jailed under the draconian UAPA - a law under which critics of a government can be jailed on the most baseless of charges and incarcerated for years without bail or trial.

A photograph from 2018 shows Meeran Haider, Asif Tanha, and Khalid Saifi - three of the anti CAA activists charged with UAPA - cooking at a community kitchen for farmers who had marched to Delhi. Students and youth like these three were foot soldiers of the farmers movement as well as the anti CAA movement. Arranging langars (community kitchens) for anti CAA Shaheen Baghs is declared a crime by the Delhi Police. Farmers from Punjab who organised such langars at Shaheen Bagh may well face UAPA charges in the days to come!

It is time for farmers, workers, ordinary people of India to come together against all the draconian laws - Farm Laws, Labour Code Laws, CAA and UAPA - and the authoritarian regime forcing these devastating laws on people.