Police Repression During Lockdown Must Stop 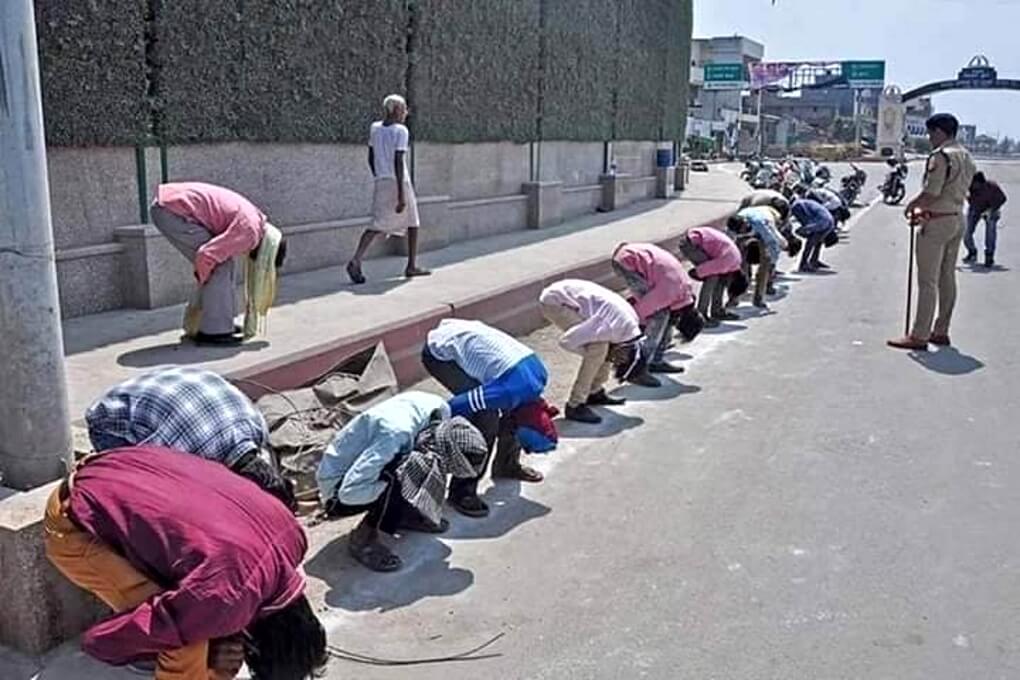 CPIML has strongly condemned the repressive behavior of the police and administration during this horrific time of crisis due to Corona and the unplanned and cruel lockdown imposed as a preventive measure. It was hoped that the police and administration would adopt a friendly attitude towards the poor amid this crisis, but they are doing the opposite. The government must adopt a people friendly approach and stop the repressive measures.

The reports of police action in Jehanabad and Gopalganj is extremely condemnable. In Jehanabad, instead of advising and explaining to the people the police are adopting repression and atrocity. 40 workers from Durgapur in West Bengal had returned to Dayali Bigaha village in Modanganj Block, Jehanabad District and they were screened. Afterwards 6 more workers arrived who could not get any Corona-related screening or testing done. As per the reports the Circle Officer came along with a police force and started abusing the 6 workers instead of explaining to and advising them. This vitiated the atmosphere in the village and a tense situation developed, after which the CO went back.

But soon a posse of police arrived led by the DM and SP, and started blindly beating up the villagers. The basti has about 150 houses and the police entered the houses, climbed up to the terraces, and beat up the people. They broke the handles of the hand pumps. The whole village was terrorised.

When CPIML leaders protested against this, Yogendra Yadav and 3 other leaders were arrested and sent to jail.

In a similar situation at Bhore Block in Gopalganj, people’s anger burst out because of the repressive behavior of the Bhore Circle Officer, Jitendra Kumar Singh who indiscriminately beat up people, many are badly injured.

On 28 March same CO brutally beat up and injured a 70-year old man who earned his livelihood by ironing clothes to make him shut his shop near Dharikshan More. Another such incident occurred at Kali More where a 75-year old man on his way back home was beaten up and left unconscious. A third incident occurred at Vishrampur where two women going for work on mustard fields were beaten up. The fourth incident involved the beating up of two persons who were cooking; the Circle Officer also confiscated their vessels and gas stove. The angry villagers jammed the Bhore-Pirganj road in protest on 30 March and raised slogans against the goondaism of the CO.

The CPIML has demanded that the administration should immediately put an end to such repressive actions and to immediately release ML leaders in Jehanabad and others arrested baselessly; strict action against DM, SP and Modanganj Circle Officer,

Bhore (Gopalganj) Circle Officer is also demanded along with the immediate relief and compensation for the victims. 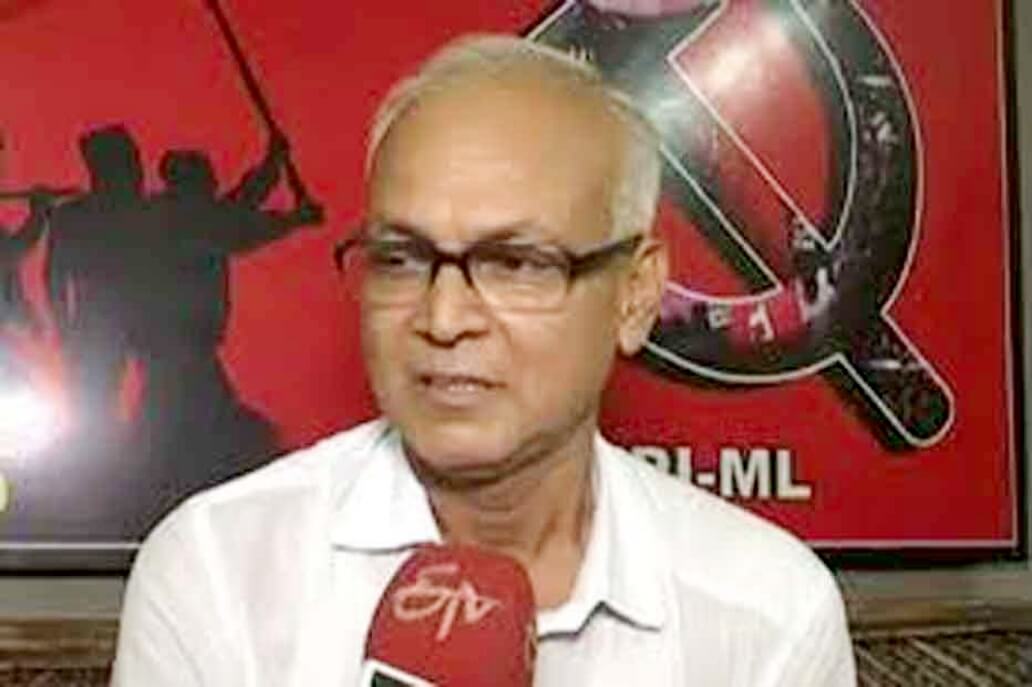 Insensitive Administration: No Concern for Workers

CPIML Bihar State Secretary Kunal said on 28 March 2020 that the insensitivity of the Bihar government and administration in this horrific situation created by the lockdown is a matter of grave concern. The helpline numbers issued by the Bihar government were not working and the administration is deaf to all concerns. Thousands of workers are stuck inside and outside the State but adequate help is not reaching them.

In addition, the lockdown has started to create a starvation situation. Very recently 11 year old Rakesh Musahar died for want of food and medicines. He was suffering from fever for some days but nobody from the administration came to enquire about him despite being contacted again and again. Similar reports are coming in from other places also.

In this hour of crisis while everybody want to cooperate and work with the administration in helping workers and other needy persons, the administration has adopted a very negative attitude. At present CPIML cadres, people’s elected representatives and mass organisations are doing everything possible to help the affected to the best of their ability. CPIML has directed all District Committees to give topmost priority to the crisis created by Corona virus and the lockdown and to make lists of workers stuck in their Districts and render them every possible help.

At the initiative of CPIML, AICCTU and other organizations arrangements for stay and rations have been made for workers stuck at many places. 13 workers from Patna District were stuck in Khagariya. The local unit of the Party took initiatives to ensure that the administration made arrangements for these workers at the local school. CPIML Kerala unit is taking steps to make stay-arrangements for 50 workers from Champaran stuck in Kerala. CPIML and AICCTU activists are doing everything to help 45 workers from Jehanabad and Nalanda stuck in Chennai. The party is able to reach out to thousands of stranded workers in different states in this manner.

AICCTU has assisted 22 workers from Saharsa stuck at Digha in Patna. These workers have been sent to Bankipur where arrangements have been made for their stay and food. The arrangements to send all of them to Saharsa were made by taking police help. Workers from Arwal who are stuck in Delhi have started to get rations after AICCTU took initiatives. Attempts are being made through social media to tag, contact, and send messages to the Chief Ministers and senior officials in States where workers are stuck. We hope that the government(s) will take notice of these messages without delay and take essential steps to help the needy. 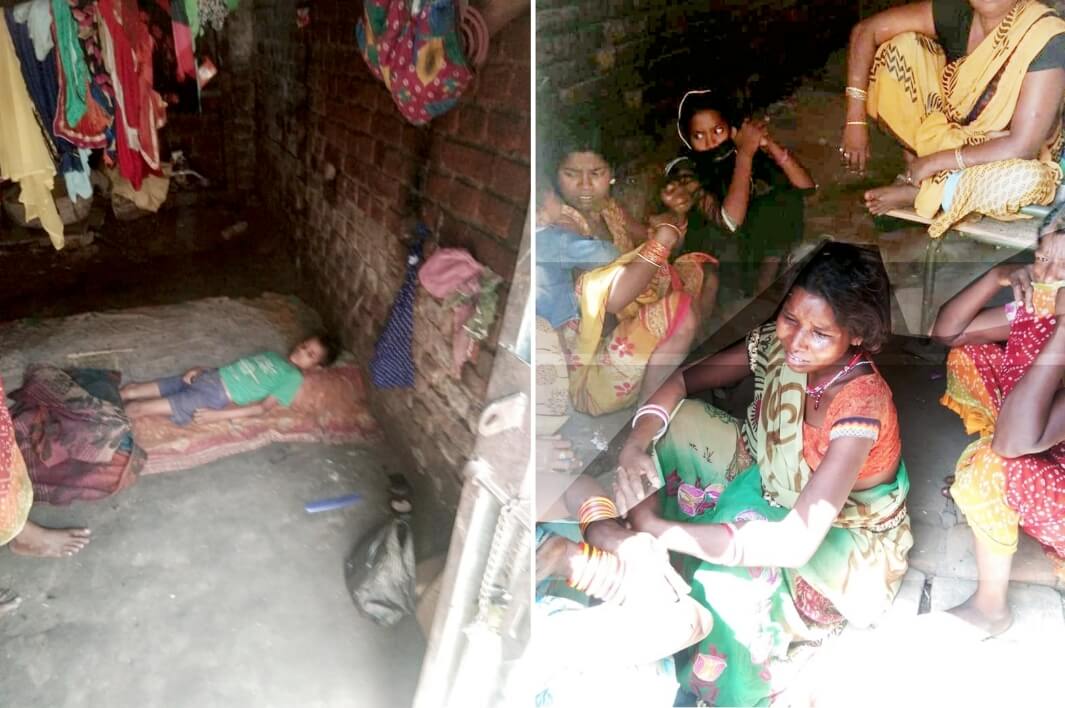 11 year old Rakesh Kumar, s/o Durga Musahar, died for want of medicines on 26 March 2020. He was a resident of Jawahar Tola, Ara Nagar, Ward No. 40, Bhojpur District, Bihar. Already poor and sick, the lockdown further deprived this family of work or any other means of survival.

Durga Musahar had three sons and a daughter who is the youngest of the siblings. The eldest son is 14 year old Gorakh Musahar who works as a rag-picker. The deceased was the second son who also used to work with his brother as a rag-picker. The third son Chintu (age 8) died of illness last year during Dussehra. Durga Musahar does daily wage work but has been unable to get any work since 22 March. If somehow he managed to get some work from the Bazaar Samiti now and then, the family managed to subsist.

The sequence of events that led to the death of 11 year old Rakesh exposes the insensitivity of the government. On 24 March the boy developed a high fever and also started vomiting. He was taken to Sadar Hospital where a doctor saw him but they did not get the required medicines at the hospital. They were unable to buy the medicines from outside because of lack of money. They brought back the child home in the same condition. The next day Durga Musahar went out again in search of work so that medicines for the child could be arranged, but that day also he failed to get any work. On 26 March Durga again went in search of work but at 10 AM Rakesh Kumar died for want of medicines, and his father was not even aware of his son’s death. The dead body was kept till the evening when Durga returned, and then the last rites were performed. The family did not even get the money for the last rites supposed to be given through ‘Kabir Antyeshti’ scheme.

Similar situation prevails in many houses in the Musahar Toli. In absence of any government assistance the local activists have collected and distributed rice, wheat and other essentials to them. They are also talking with the administration to ensure continuous supply of food and other items to all such families.

In contrast to the repressive tactics by the administration, the activists of various mass organisations are going to villages and towns helping people and explaining to workers, farmers, poor, and daily wage workers how to change basic habits and practices to prevent the spread of Coronavirus. They are alerting the people to basic precautions like physical distancing, repeated washing of hands, cleanliness and hygiene, and covering the mouth with cloth or hand while coughing or sneezing. 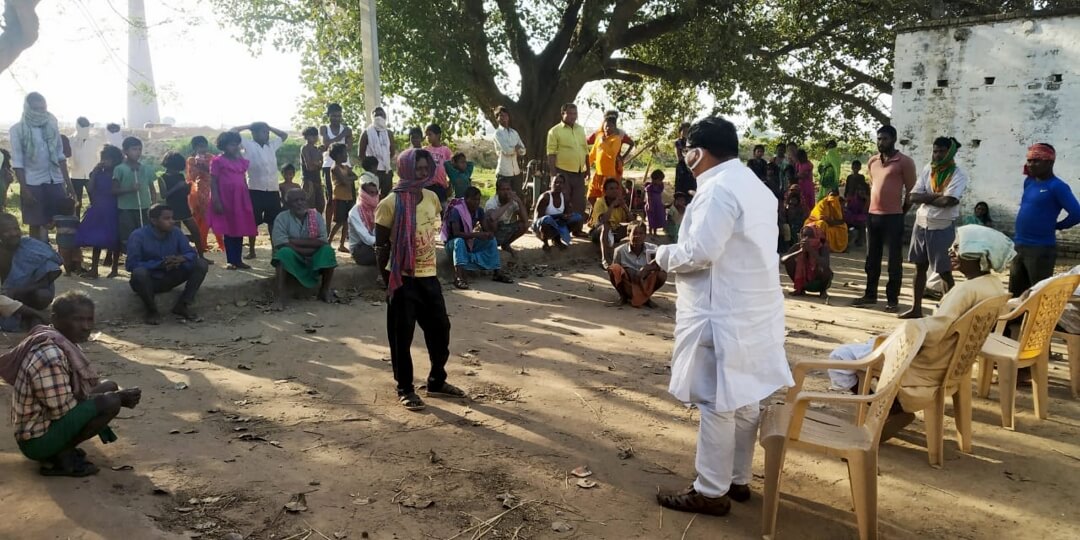 Similarly in Bhojpur, AISA-RYA activists led by Tarari MLA Sudama Prasad, Manoj Manzil and Raju Yadav have made teams and are going to different villages and Tolas to distribute rations, soap, and hand-wash to workers, farmers and the poor and to help them in whatever problems they are facing.

In Jharkhand, CPIML MLA Vinod Singh along with Party activists is going amongst the poor, workers, farmers and adivasi communities and helping to resolve their problems to the maximum possible extent. Comrade Vinod Singh is also putting pressure on the government to make rations available, as well as telling the government to coordinate with other State governments in helping migrant workers from Jharkhand stranded in other States.

CPIML activists have prepared a list of the hundreds of daily wage workers stranded in other States and sent it to Chief Minister NItish Kumar so that interventions are done to make arrangements for their care as well as food and stay. 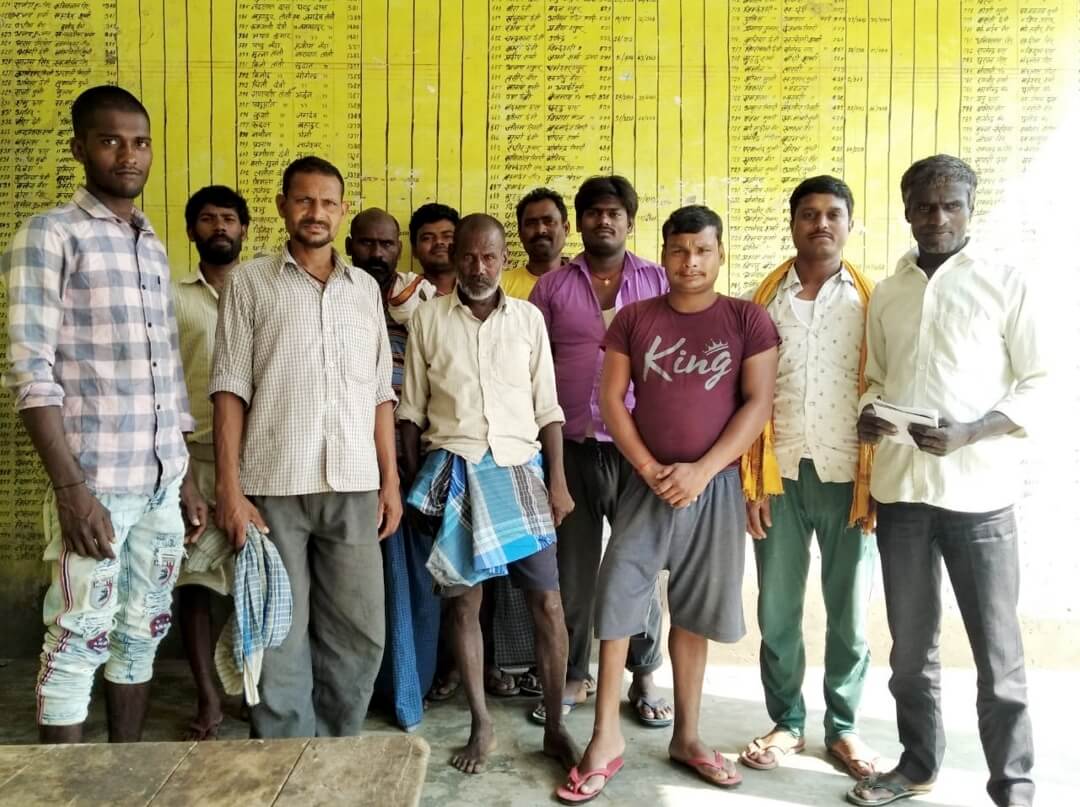 Due to the lockdown suddenly announced by the Prime Minister on 24 March, migrant workers from Bihar are stuck at various places. 50 workers from Western Champaran are stuck at Thrissur in Kerala. They are unable to return to Bihar because all trains and other means of transport are shut down, and they have no food to eat.

In this regard, CPIML politburo member comrade Kunal spoke to the Bihar Home Secretary and demanded that adequate food and stay arrangements should be made for all workers who are thus stuck. He said that reports of workers being stuck are coming from many places and the Bihar government should make arrangements to ensure that they have a place to stay and adequate food to eat. In addition, the party also approached those stranded workers through its organization in Kerala and made arrangements for the workers’ food and stay.

CPIML in Bihar has also given names and addressed of many stranded workers to the administration but so far nothing in concrete has been received from the Bihar administration.

CPIML offices in various states are working day and night to receive calls from the stranded workers and trying to extend every possible help. The party and its trade union organization AICCTU has also appealed to the people to contribute in every manner for the assistance of lockdown affected migrant workers.

The party has also condemned the hoarding and black-marketeering being done in the wake of the lockdown. The situation is so dire that the prices of all essential goods have spiraled the common people are being exploited even in this hour of crisis. The CPIML demands that the Central and State governments guarantee supply of rations and other essential items to the poor, workers, and weaker sections through the Public Distribution System (PDS). It has also been demanded that the government should give a minimum of three months’ ration to all the poor, urban as well as rural poor. Sanitizers, masks, and soap should be distributed among the poor. Adequate subsistence allowance should be given to workers, farmers, small shopkeepers, and the poor as compensation for loss of livelihood.