THE indefinite dharnas against CAA/NRC/NPR like that of Shaheen Bagh in Delhi started at Harun Nagar and Sabji Bagh in Patna and have now spread across Bihar. The dharna at Shanti Bagh in Gaya is much talked about. Indefinite dharnas are on at about 30 places including Beguserai, Darbhanga, Katihar, Arwal, Jehanabad, Siwan, Gopalganj, Muzaffarpur, Saharasa, Bhagalpur and Western Champaran. In capital Patna, dharnas are on at Harun Nagar, Sabji Bagh, Lal Bagh, Ishopur, Samanpura, Raja Bazaar, Diga, Khagaul and Patna City. Braving the biting cold, women are leading these dharnas. Students, youth, and artist groups are joining them in support and solidarity. Leaders and activists from CPIML, Insaf Manch, AISA, RYA, AIPWA, AIARLA, Kisan Mahasabha, AICCTU, Hirawal and Chorus are at the forefront in this movement.

On 21 January CPIML General Secretary Dipankar Bhattacharya addressed the indefinite dharnas going on in Patna. He took part in the Save Constitution rally organized in Patna City which was attended by tens of thousands of people. Yogendra Yadav also participated in the rally, as did CPIML State Secretary Kunal, CC member Saroj Chaube, Patna City Secretary Abhyuday, Naseem Ansari and other leaders. On the same day at 7 pm Comrade Dipankar addressed the dharna at Lal Bagh near Patna University in a program organized by AISA, Insaf Manch and Bhim Army. Comrade Dipankar said that this draconian law affects not only minorities but also the poor, dalits and weaker sections. He also addressed the ongoing dharnas at Phulwarisharif and Sabji Bagh. In the evening he visited Gaya and addressed the dharna at Shanti Bagh. 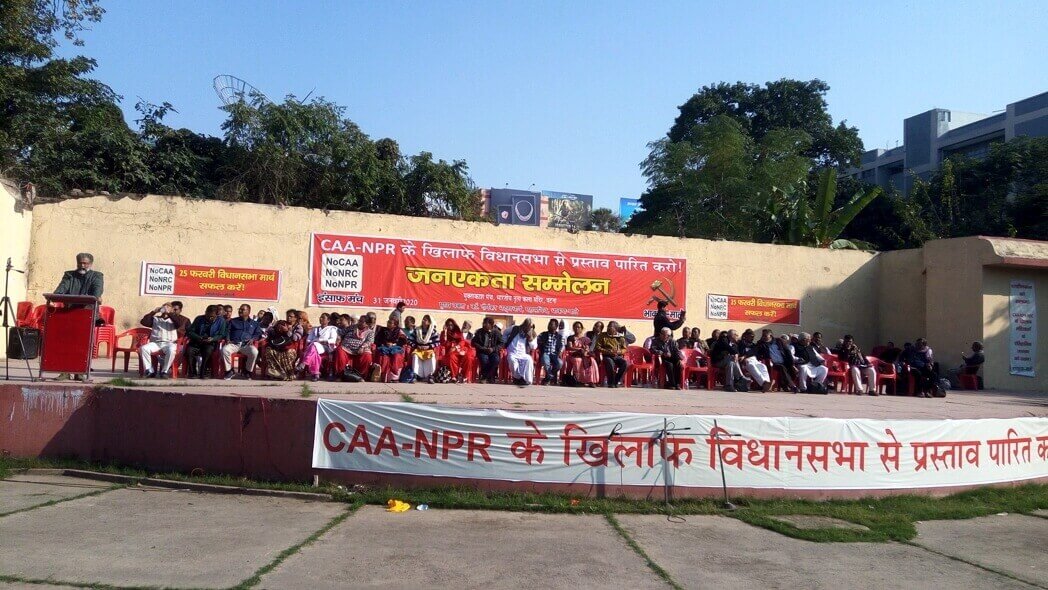 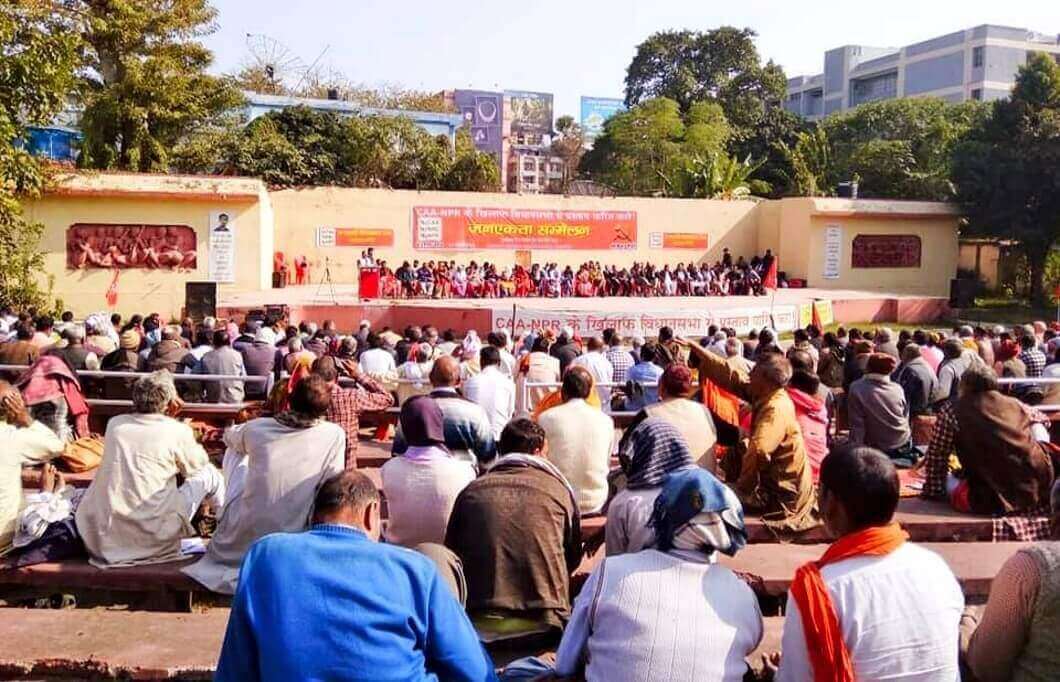 On 31 January the CPIML General Secretary addressed the Jan Ekta Sammelan (People’s Unity Conference) in Patna. He said that NItish Kumar should stop his double-speak and take the initiative to pass a resolution against these draconian laws. He called upon the people to make the Vidhan Sabha march on 25 February a historic success. He further said that RSS and BJP are spreading the propaganda that these protests are only by Muslims; they are also spreading the lie that Hindus have nothing to fear. But 56,000 migrant workers from Bihar have been stripped of citizenship in the Assam NRC. A countrywide NRC will strip crores of people, mostly poor and weaker sections, of citizenship. The Jan Ekta conference was also addressed by social activist Arshad Ajmal. 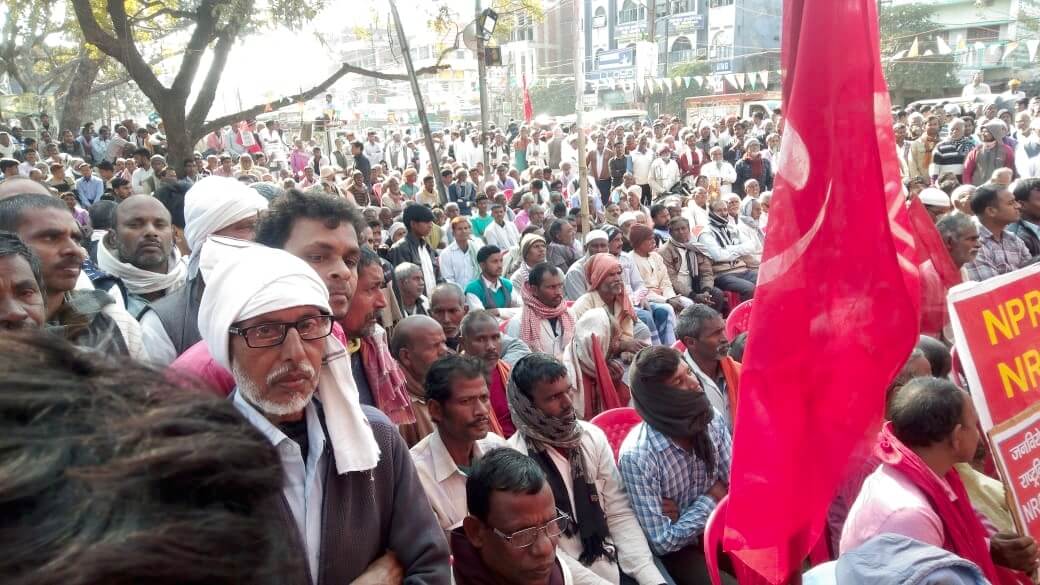 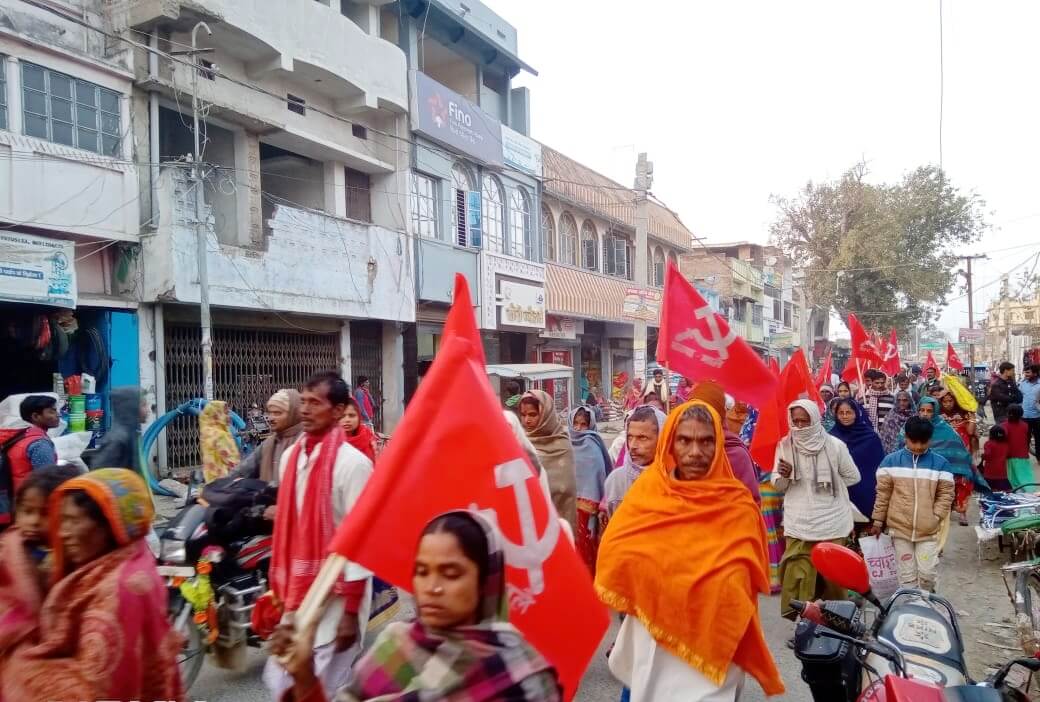 On 1 February Comrade Dipankar addressed a dharna organized at Jehanabad and a meeting at Masaurhi. On 2 February he participated in ongoing dharna protests at Samastipur and Beguserai, accompanied by PB member Dhirendra Jha and senior leader Comrade Rajaram. On 3 February he addressed meetings at Arwal, Paliganj and Sigodi, accompanied by senior leader Amar, State Standing Committee member Mahanand, Anwar Hussain and other leaders. On 4 February he visited Bhojpur and addressed meetings at Piro and Ara along with MLA Sudama Prasad, Manoj Manzil, Raju Yadav and senior Party leaders. On 5 February he visited Siwan and Ara, accompanied by State Secretary Kunal and PB member Dhirendra Jha. A historic rally was organized at Siwan. On the same day he also addressed a meeting at Gopalganj. On 6 February a meeting was organized at Daudnagar which saw a large participation of dalits and poor along with minorities.

CPIML Bihar State Secretary Kunal has sharply condemned the stone-pelting incident perpetrated by BJP/RSS-supported goons on CPI leader Kanhaiya Kumar’s Jana-Gana-Mana Yatra as he and other leaders and social activists were travelling in a convoy to Saharsa on 5 February 2010. Windshields and window glasses of several vehicles were broken in the attack. Earlier also the convoy had been pelted with stones in Saran, badly injuring several people. What is most worrying is that the entire incident occurred a mere 100 meters from the local Thana.

The CPIML has warned the Bihar government that they should stop strangling democracy. The people behind these incidents are clearly the BJP and RSS who are spreading the venom of divisive hate-filled politics in Bihar on the lines of what they are doing in all other parts of the country. He demanded that the goons who pelted stones should be identified and immediately arrested and the safety and security of the Jana-Gana-Mana Yatra should be guaranteed.