State Govt. Complicity in the Attack by Communal Elements of People in Phulwarisharif 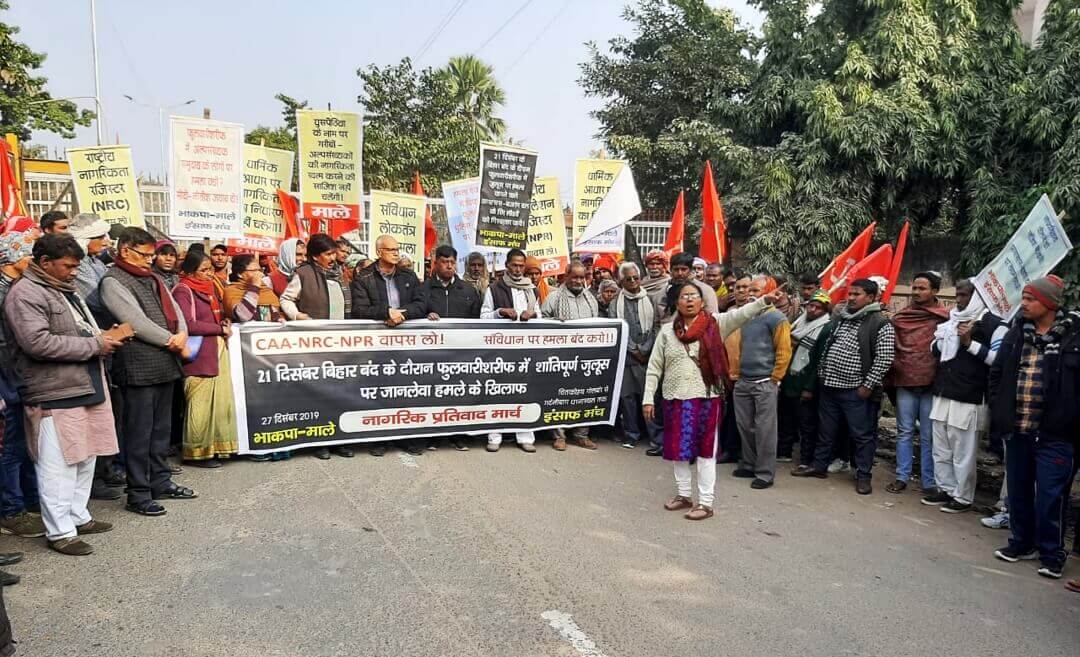 A high level CPIML fact-finding team visited Phulwarisharif on 22 December to enquire into the incidents of violence which took place on 21 December during Bihar Bandh. After speaking with family members of the injured victims and their families, Bihar State Secretary Kunal said that the state administration was complicit in the attack on bandh supporters against CAA-NRC on 21 December 2019. If the administration had reined in the rioters on time, this incident could have been avoided. The RSS and Bajrang Dal are behind the firing and stone-pelting on Bandh supporters near Tamtam Padav. The same people had tried to spread violence during the 19 December Bandh also, but their attempts were foiled. However, they succeeded in their evil design on 21 December. Their firing and stone-pelting injured many Bandh supporters who come from the Muslim community and who were deliberately targeted by the rioters. Ten of the injured are being treated at AIIMS Patna and one at PMCH. Action should be taken without delay against the Phulwari Thana administration for negligence. Nitish Kumar should ponder seriously on this issue but it appears that he has surrendered totally to the rioters. The fact-finding team comprised State Secretary Kunal, former MLA Rameshwar Prasad, Patna District Secretary Amar, AIARLA State Secretary Gopal Ravidas, senior leader Satyanarayan Prasad, Mukhiya Jaiprakash Paswan, Gurudev Das, Yogendra Yadav and others. 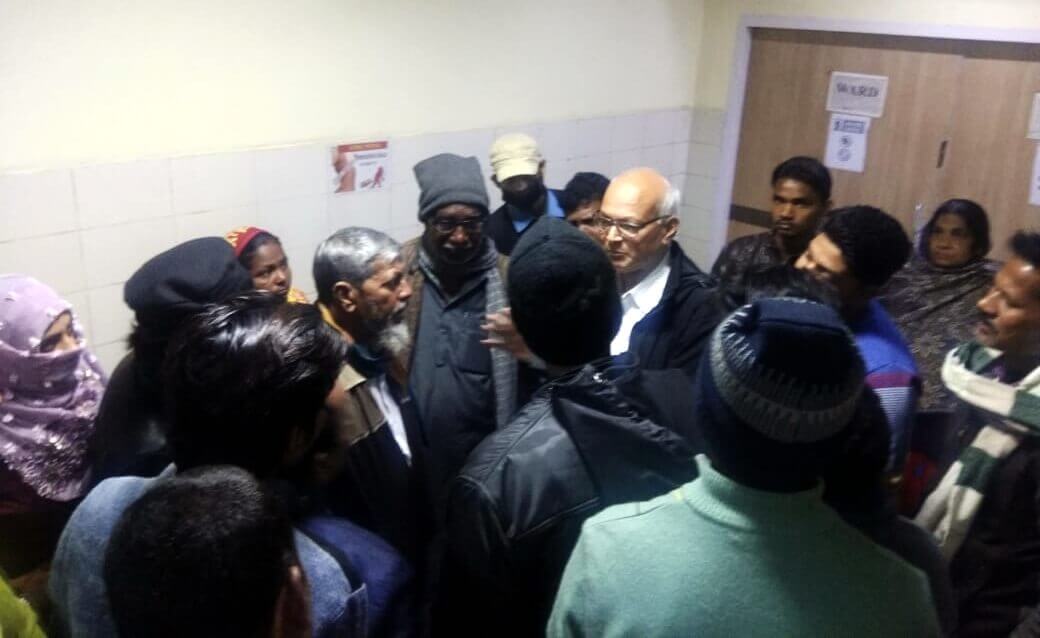 The team members spoke to the injured, their families, and also to the local Thana officials. Talks revealed that the Saraswati Shishu Mandir area near Tamtam Padav is an RSS dominated Mohalla. The administration had prior suspicions of trouble, and yet they did not take any precautions. They told the team that they have made a list of 100 people of whom they have arrested 23 Hindus and 17 Muslims. The team demanded that the administration should arrest the masterminds of the attack; but instead they are wrongfully raiding villages of the minority community. Eyewitnesses told the team that two tractors full of rocks were assembled near Oriental Bank, and it was from the roof of the bank that the rocks were thrown and firing was done. The attackers also tried unsuccessfully to attack the Pethiya Muslim Mohalla. Clearly, the Sangh gang is trying to give the anti-CAA/NRC protests a communal coloring. The team members met the injured persons Mohd Shahnawaz (bullet injury in neck), Mohd Ashraf (bullet injury in stomach), Mohd Shabir Alam (bullet injury in leg), Mohd Faizal (bullet injury in hip), Mohd Irfan (nose injury), Mohd Anas (head injury), Mohd Tausif (eye and head injury), Mohd Akbar and Shailendra Kumar (leg injury).

The CPIML demands action against the local administration for negligence; stop raids against minority community; arrest the ring leaders of the attack; proper treatment and Rs 2 lakh each as compensation for the victims. We condemn the violence against journalists during the Bandh. Nitish Kumar’s silence is deafening and we demand that the Bihar government should guarantee the safety of lives and property of the people of Bihar.

CPIML has appealed to the people of Bihar to maintain calm. 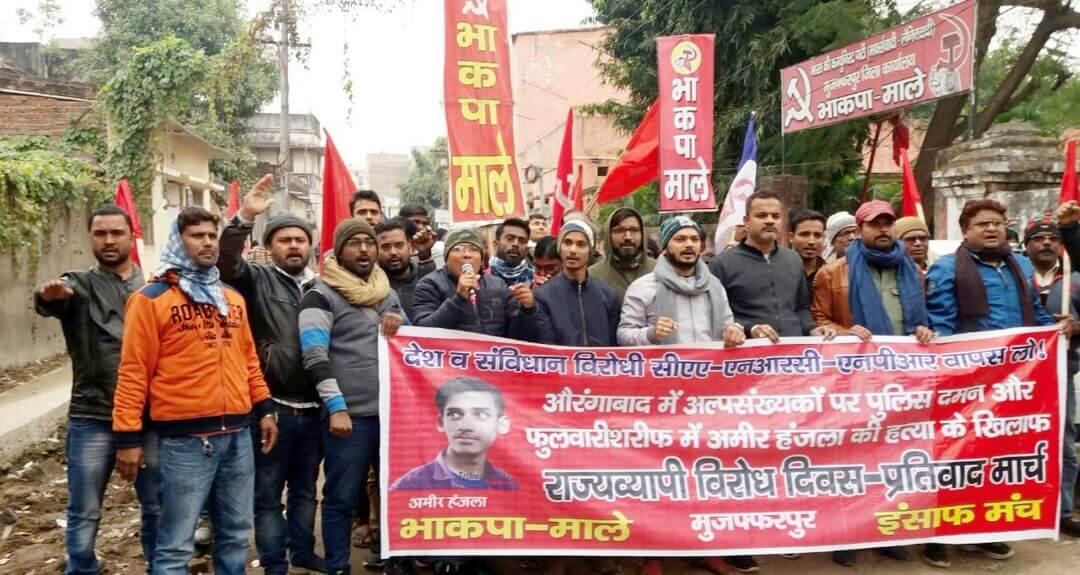 A citizens’ march in Patna organized by CPIML and Insaf Manch against the attacks on Bandh supporters by RSS-Bajrang Dal in Phulwarisharif on 21 December was stopped by the administration. Denied permission at Chitkohra Golambar, the protesters tried to hold the march at the dharna venue in Gardanibagh, but this was also stopped and the use of microphone was refused. As a mark of protest, the citizens held a silent march at the venue and held the meeting without microphones.

Addressing the meeting, PB member Dhirendra Jha said that the Bihar government is protecting the perpetrators of violent attacks and voices of dissent are being brutally crushed and killed in Bihar just like in Uttar Pradesh and other parts of the country. State Secretary Kunal said that our protests against CAA-NRC-NPR will continue despite the brutal attacks by government-protected goons. Legislative group leader MLA Mahboob Alam said that Nitish Kumar stood with the central government on CAA and is now saying he will not implement NRC in Bihar, but he had refused a discussion on NRC in the Bihar Assembly. The people of Bihar will not be deceived by his two-faced tactics. AIPWA General Secretary Meena Tiwari said that Modi and Amit Shah are misleading the country with bare-faced lies on CAA and NRC. AIPWA Bihar Secretary Shashi Yadav said that the people of Bihar will teach BJP a lesson just like the people of Jharkhand have done. The meeting was also addressed by AICCTU State Secretary Ranvijay Kumar, AISA Joint Secretary Akash Kashyap, RYA State Secretary Sudhir Kumar,AIARLA Bihar Secretary Gopal Ravidas, former MLA Rameshwar Prasad, PB member Amar, saroj Chaube, Mukhtar, Jitendra Kumar, Ali Akhtar, Murtaza Ali and others. 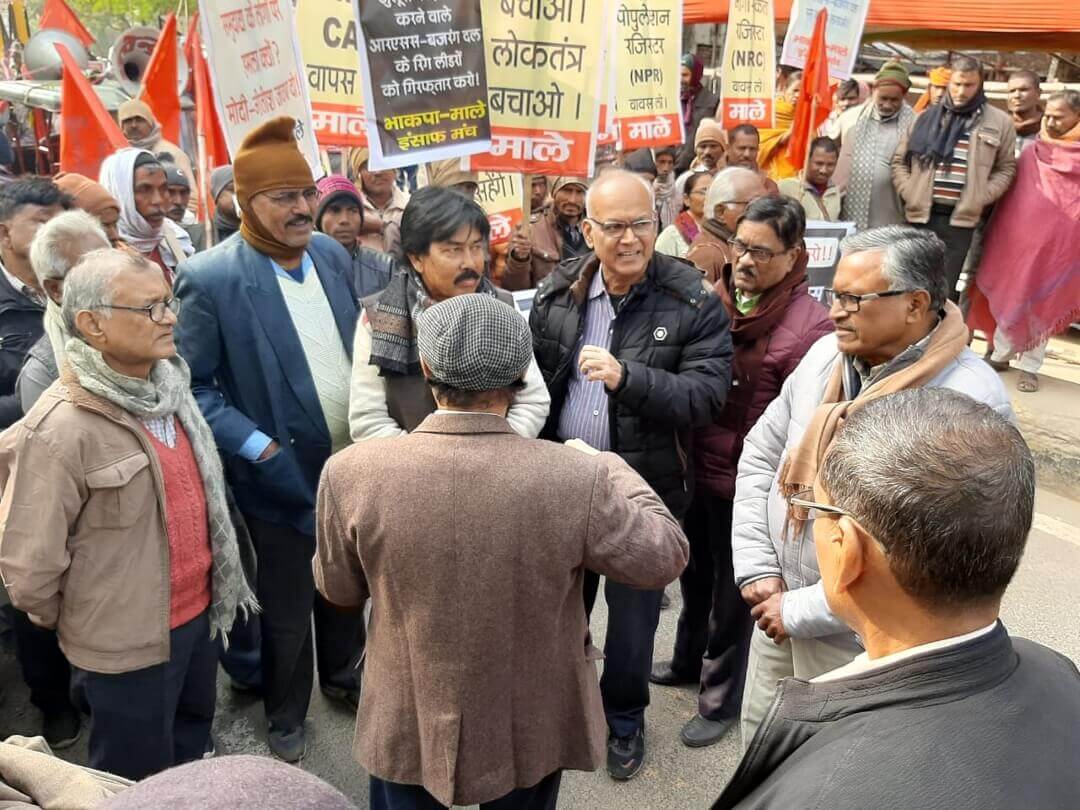 CPIML State Secretary Kunal said that brutal atrocities were committed on the minority community on 21 December at Phulwarisharif during the Bihar Bandh, but an even more brutal and heinous incident was perpetrated at Aurangabad. The police entered the homes of Muslims and crossed all limits, arrested 46 persons and threw them into jail, where they still languish. Nitish Kumar is working exactly like the UP government and wants to impose a reign of terror in Bihar as well. There are children between the ages of 12 and 17 among the 46 people arrested. Women and elderly people have been dragged by the police and thrown into jail. 22 people have been arrested just for forwarding Whatsapp messages.

The police repression unleashed at the instigation of RSS on 21 December at Aurangabad is shameful and condemnable. At Phulwarisharif mortal attacks were carried out on the minority community and 17 year old Amir Hanzla was killed. The heinous atrocities at Aurangabad were hushed up. Nitish Kumar is working to carry forward the communal agenda of RSS in Bihar. He remains silent while brutalities on minorities are committed. 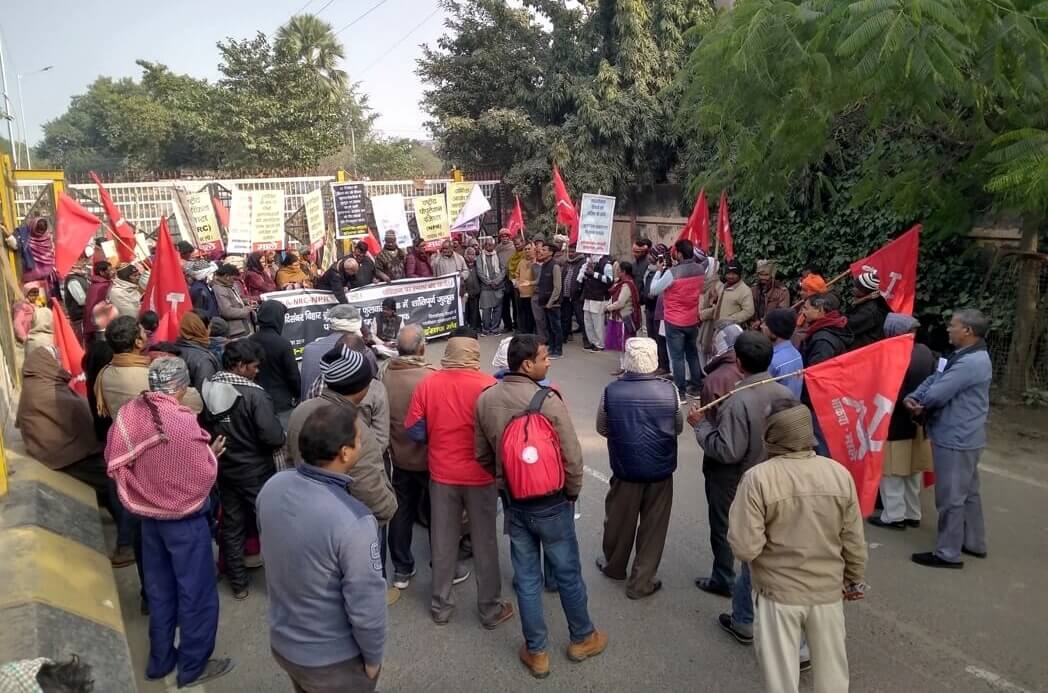 A CPIML team visited Aurangabad on 31 December to enquire into the brutalities. They found out that as the protesters (mainly Muslim) were passing through Pandey Pustakalaya area, BJP leaders Anil Gupta alias Oriyawala and Akash Gupta started abusing the protesters. When their abuses got no response, they started pelting stones and the protesters then pelted stones in return. A stampede followed, after which people returned to their homes. The police then started attacking Muslim Mohallas. It is noteworthy that the violence during Ramnavami also started at this place near Pandey Pustakalaya.

The police attacked 11 Mohallas, breaking down doors and homes, destroying 9 4-wheelers and 15 motorcycles. They also looted cash and ornaments. Cases have been slapped on 84 persons, of whom 39 have been arrested (38 Muslims and 1 Hindu). 12 minors are among those arrested. The 11 Mohallas are: Shahganj, Qureshi Mohalla, Ansar Bagh, Pathan Toli, Azad Nagar, Ali Nagar, Islam Toli, Nawadih, New Kazi Tola and Tikari Mohalla. CPIML and Insaf Manch leaders enquired in depth into the incidents at Pathan Toli, Qureshi Mohalla, Ansar Bagh and some others. They found that terrible havoc and damage had been done on the lines of the attacks in Uttar Pradesh. The homes of Ashfaq Qureshi and Nehal Qureshi (where an engagement ceremony was taking place) were looted and destroyed. The damages are about Rs 10 lakhs. Many people were dragged away and arrested from these homes. Similar looting and destruction also took place at Pathan Toli and Ansar bagh.

It is shocking that Aurangabad DM Rahul Ranjan Mahiwal was himself leading the attack at Aurangabad, and SP Varun Varnwal was pelting stones. 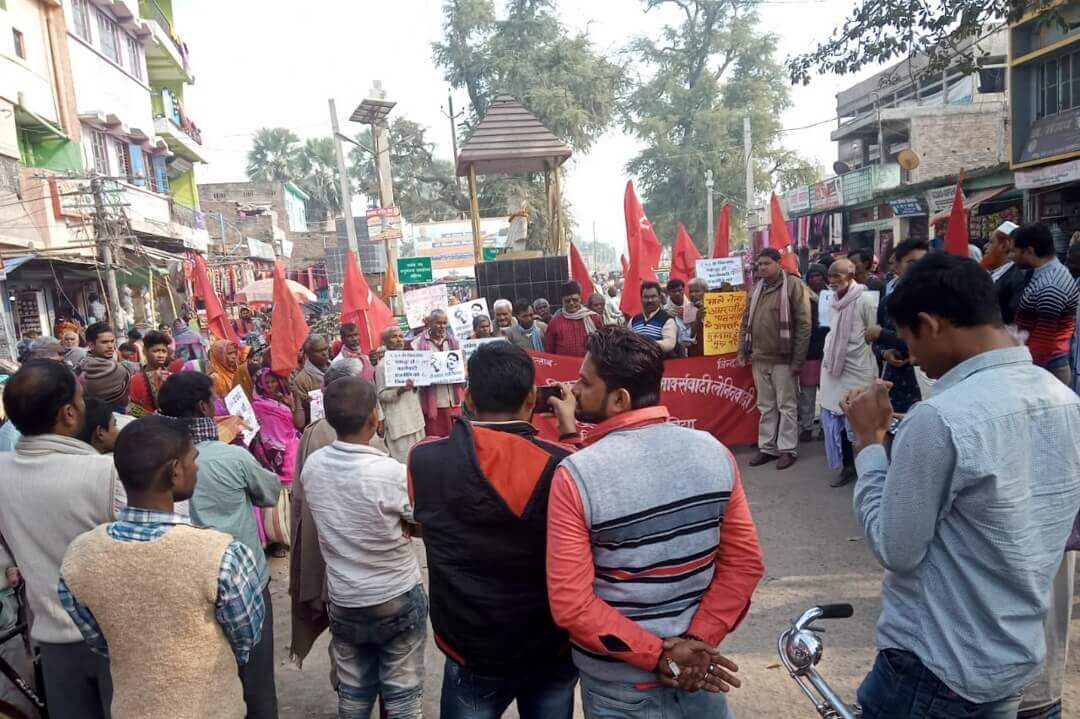 Meanwhile on the night of 30 December the body of Amir Hanzla was found. After being killed by attacks with bats and knives, his body was thrown into a ditch near the Phulwari complex. Amir Hanzla was a resident of Alinagar Block in Darbhanga and was a worker at a bag factory in Phulwari. False cases are being slapped on protesters including senior party leaders. Permission is not being given for protest marches or meetings. CPIML and Insaf Manch held 2-day statewide protests on 4-5 January 2020.

1. Immediate action against Aurangabad DM and SP and other officials involved in the brutal repression
2. Assessment of damage and compensation for the victims
3. Immediate release of all the arrested persons
4. Arrest BJP leaders Anil Gupta (Oriyawala) and Akash Gupta
5. Stop RSS-BJP conspiracy to spread riots and attack peaceful protests
6. Rs 20 lakhs compensation and government job to one family member of Amir Hanzla killed in the Phulwarisharif attack 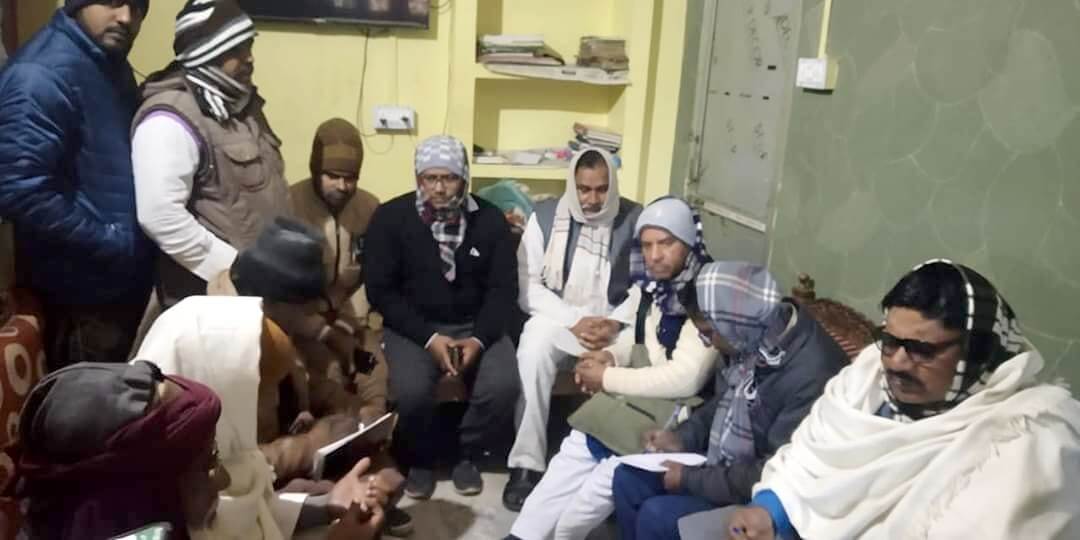 After speaking with the family, Comrade Amar said that Amir Hanzla’s dead body was found in a ditch near the old DSP office in Phulwari on 30 December. Two days earlier the police had caught Deepak Kumar in this matter and interrogated him. During the interrogation it was revealed that Amir had been stabbed to death on 21 December and his body had been thrown in the ditch.

Amir was working in a bag factory near Thana Chowk. 17 year old Amir was the son of Suhail Ahmed residing in Harun Nagar Sector 3. They are originally from Mirzapur village in Alinagar Block, Darbhanga District. Amir was the 4th son of Suhail.

The CPIML leaders said that this is the first incident of killing in the violence that has taken place on anti-CAA-NRC-NPR protesters in Bihar. Minorities in Bihar are being attacked and brutalized on the lines of the communal targeting in Uttar Pradesh. They pointed out that the ring leaders of the Phulwari incident are being protected and shielded. CPIML strongly condemns this and also demands Rs 20 lakhs as compensation for the family of Amir Hanzla and a government job for one family member. Above all, we demand that the Bihar government should take steps to stop the spread of hatred and violence against minorities in the State. 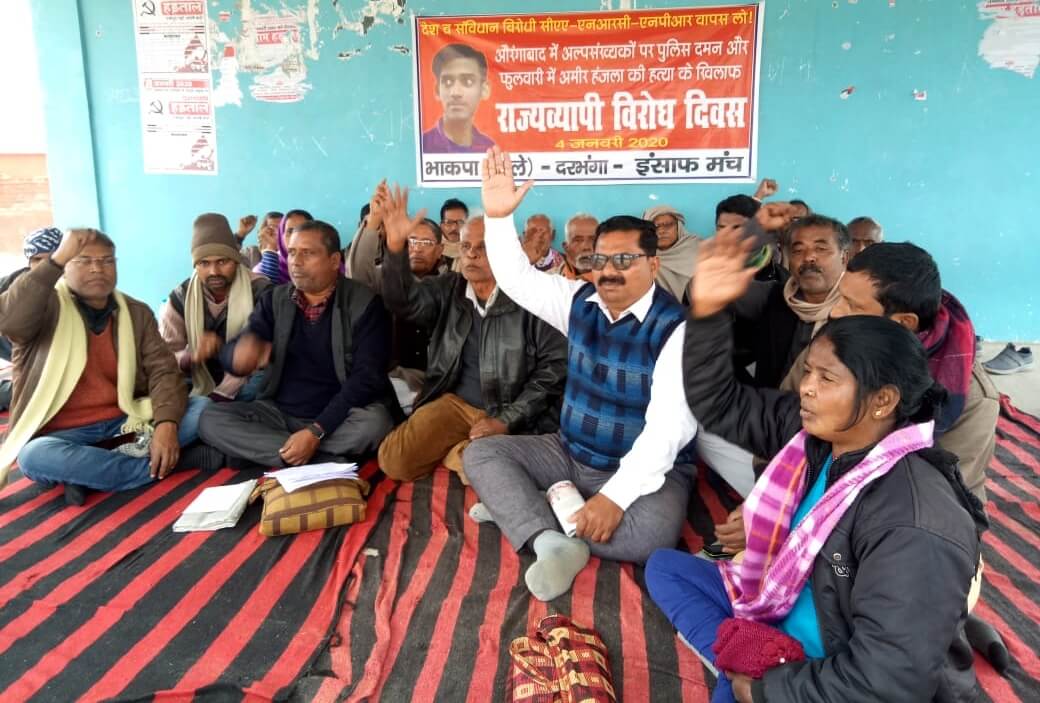 Dharna for Justice for Amir Hanzla and Aurangabad Victims

CPIML and Insaf Manch organized a dharna on 5 January 2020 at the Gandhi statue in Gandhi Maidan, Patna to demand justice for Amir Hanzla and the victims of the Aurangabad attacks on 21 December 2019. The dharna was in response to the statewide Protest day call.

Present at the dharna were CC member Shashi Yadav, senior leader Comrade Rajaram, Insaf Manch leader Naseem Ansari, Dr Aleem Akhtar, Murtaza Ali, Anay Mehta, Rakhi Mehta, Puneet Kumar, Vinay Kumar, Krishna Ji, Dileep Singh, Shambhu Sharan Mehta, Ram Kalyan Mehta, Ajay Kumar, Satyendra Kumar and others. Addressing the dharna, the speakers said that the police have unleashed heinous and brutal repression on protesters at Aurangabad and Phulwarisharif and 17 year old Amir Hanzla was killed by the attackers. It is noteworthy that the attacks in Phulwarisharif came to light but news of the Aurangabad attacks and police repression was initially suppressed by the police. The Aurangabad police repression makes it very evident that NItish Kumar is working to carry forward the RSS agenda in Bihar. His police and administration have become totally communal and this is extremely dangerous for democracy. It is correct to say that a ‘Mini Uttar Pradesh’ has been perpetrated in Aurangabad. The administration forcibly entered homes of minorities, looted and destroyed property, vulgarly abused women, dragged elderly people, and held pistols to people’s heads and threatened to shoot them dead. The police acted as and how they pleased and perpetrated loot and destruction.