Rape And Murder Of A Veterinarian Doctor In Hyderabad 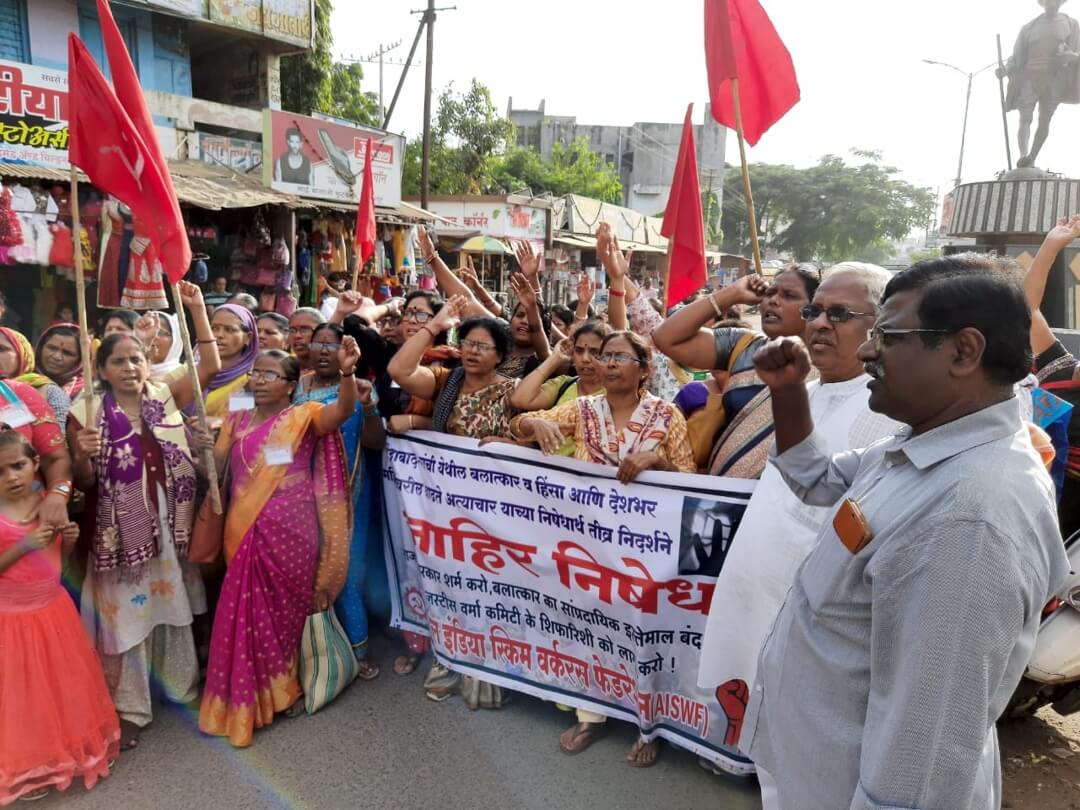 AIPWA issued a call for a countrywide protest on 3 December, and organised protests in Patna, Kolkata, Varanasi, Lucknow, Udaipur, Jaipur and many other places. In Delhi and Patna, AIPWA joined other women's groups in organising the protests.

Protestors condemned the response of a Telangana Minister who blamed the victim asking why she chose to call her sister for help instead of the police. They also pointed out that the Hyderabad police had issued an inventory of Dos and Don'ts for women to prevent rape. They said this was unacceptable - "Don't teach women how not to get raped, teach men not to rape" was the sentiment expressed by protesting women all over India.

AIPWA also expressed its condemnation of attempts to communalise the Hyderabad rape murder by singling out one Muslim name among the suspects and spreading hatred against the whole community.

AIPWA also condemned the statement by Rajya Sabha MP Jaya Bachchan asking for rape-accused persons to be lynched in public.

AIPWA activists pointed out that demands for the death penalty and lynching were irresponsible and served only patriarchal machismo, not women's rights. These cries for summary execution and lynching serve only to divert attention away from the government's and system's failure to ensure that survivors are supported, policing and judicial systems remain gender sensitive, and public spaces are made friendly to women. Further, the current government's shameless defence of rapists associated with the ruling party also sends a message of impunity to perpetrators.

The gang rape and burning of veterinary doctor Priyanka Reddy in Hyderabad on 28 November 2019 is a grim reminder of the 2012 Delhi gang rape. Recently another incident had taken place in Ranchi in the VIP area where the police lines as well as residences of VIPs like Chief Justice, DGP and CM are located. An adivasi woman student studying law at a prestigious University was kidnapped at gun point and gang raped by 12 people. The victim, half-conscious, somehow reached the police station the next morning and filed a case. The BJP government hypocritically claims the slogan ‘Beti Bachao Beti Padhao’ (save and Educate Daughters) but organizes rallies in defence of rapists, and has failed the women of India. The result is that there have been 24,212 incidents of rape and sexual violence in the last 6 months and 132 incidents per day, and these are government statistics obviously on the lower side. Women who protest against this abysmal situation are repressed, as was have seen in the case of Anu Dubey who sat alone on a dharna in front of Parliament House and was detained and beaten up badly by the police, as if women themselves are to blame for these incidents. 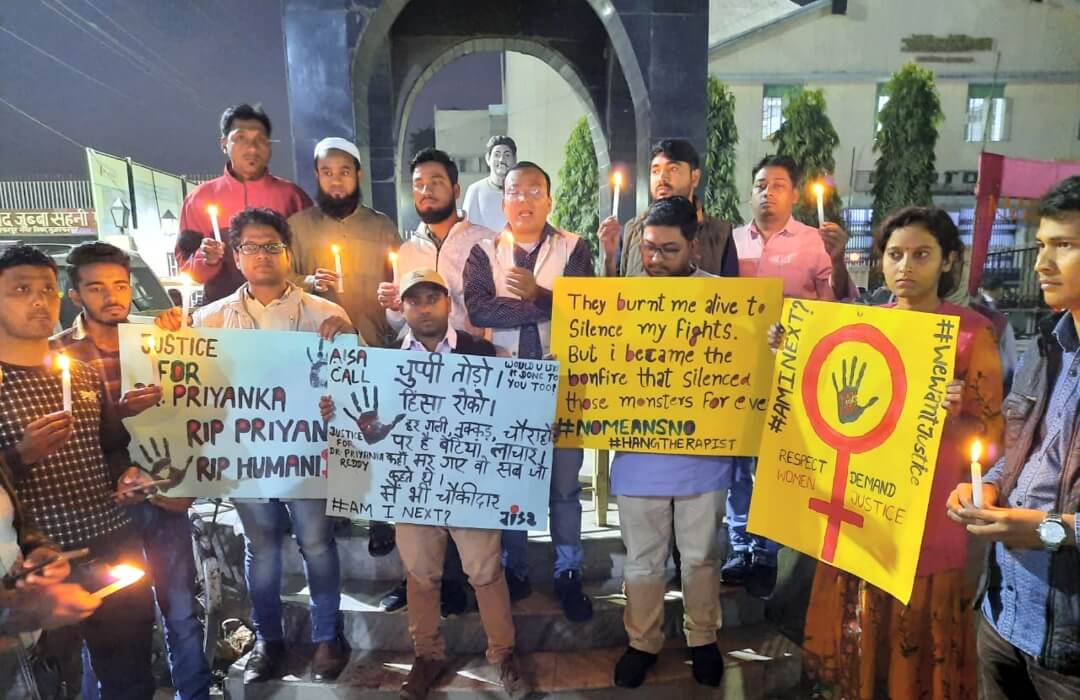 The Dr Priyanka Reddy gang rape and murder case is also being communalized by saffron forces for political gains. Of the 4 accused persons taken into custody, one is a Muslim and 3 are Hindus, but the Sanghi trolls are targeting only Muslim name Mohammad on social media.

Protests for justice for Priyanka and the Ranchi adivasi victim were organized on 2-3 December in Bihar and other states. CPIML has asked the governments to 1. Take proper measures to end sexual violence against women; 2. End communal definition of rape and sexual violence; 3. Implement Justice Verma Committee recommendations; 4. Stop diverting issues and guarantee women’s safety; 5. Sangh, BJP, stop using rape incidents to incite communal passions; and 6. Speedy trial and punishment for the guilty. 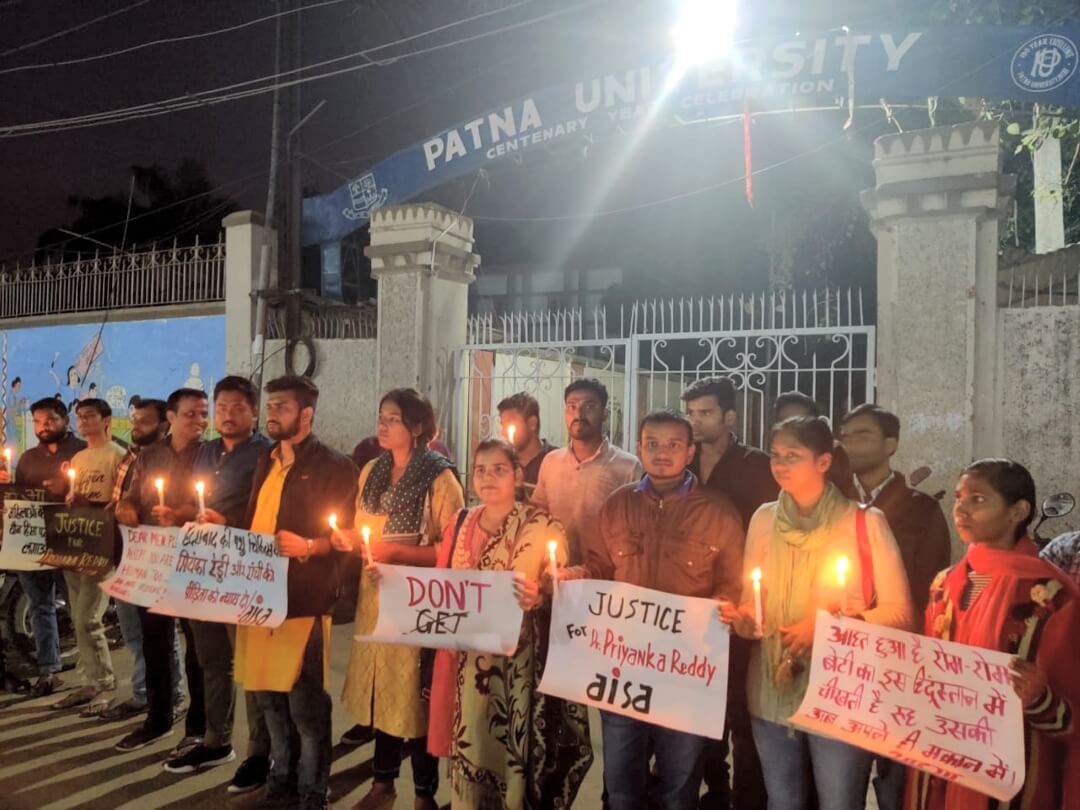