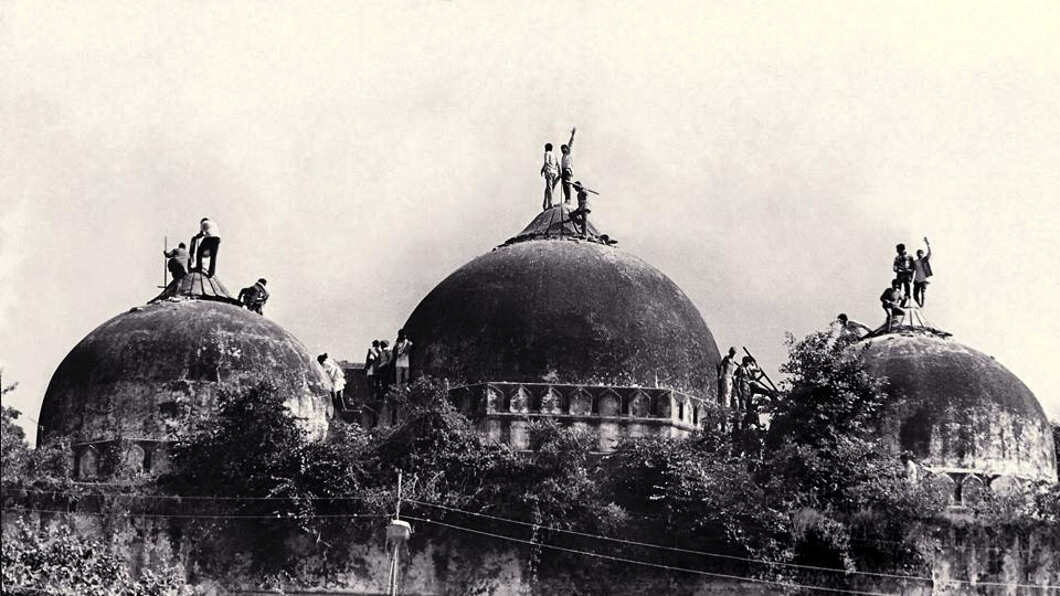 The case is at present being heard in the CBI special court at Lucknow and has seen many ups and downs in the past 27 years of the hearing, so much so that under influence from the ruling party the charge-sheet in the case was even cancelled citing technical grounds; on one occasion the name of the chief conspirator Lal Krishna Advani was removed from the charge-sheet. But then the Supreme Court intervened and reinstated the case in its original form and the hearing was resumed. About 49 people are named in this case. Now that the verdict in the Babri Masjid land ownership dispute case has been pronounced, the verdict in the criminal case related to the matter should also be pronounced without delay and the accused should be sentenced, so that the judicial process can be complete.

Even though the court verdict is being delayed, the entire country knows which persons were involved in demolishing the Babri Masjid and thus attacking the democratic secular fabric of India. There are many names which do not appear in the charge-sheet but they have themselves declared openly in public that they were involved in the demolition. All such BJP leaders should receive punishment. BJP MP Sakshi Maharaj is an accused named in the charge-sheet; admirer of Nathuram Godse MP, Pragya Thakur has been openly declaring that she was part of the Babri demolition. Both these MPs should be immediately dismissed from Parliament in the interest of justice.

Countrywide protests were organised on these two demands involving lakhs of people. At many places demonstrations were held in spite of many hindrances posed by the administration favouring ruling BJP governments. In Chennai the protest was held even after the district authorities denied permission to hold any programme on this issue. 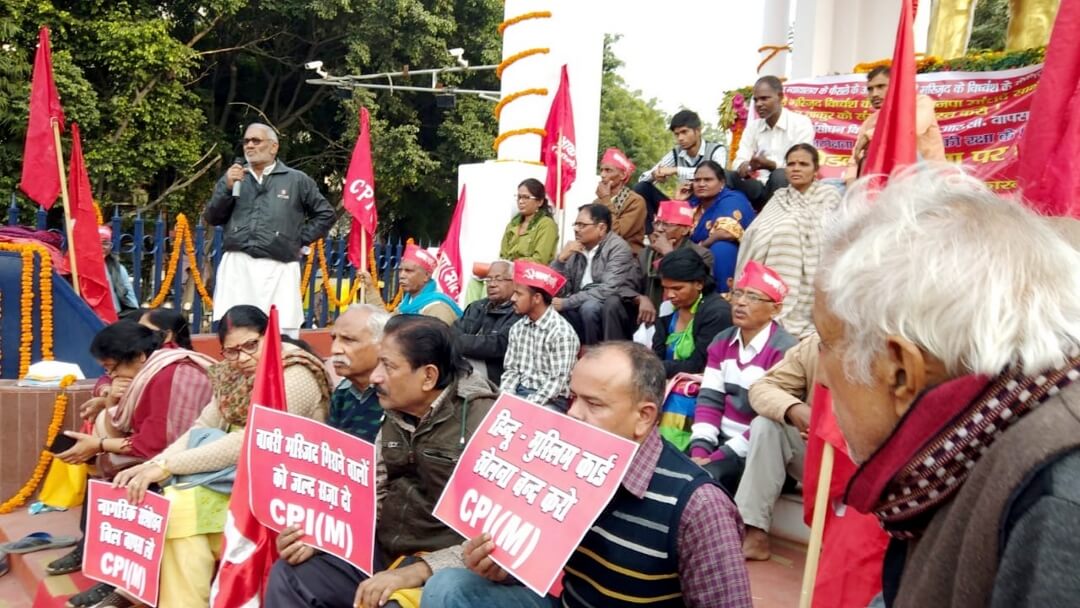 CPIML activists were holding a peaceful dharna on 6 December at Robertsganj Tahsil and preparing to submit to the SDM a memorandum addressed to the President. As they were making preparations, the police led by the local Chowki in-charge snatched away the memorandum, separated the women, and arrested 7 Party activists. They were taken to the Thana and beaten up there. Earlier, two Party leaders—State Standing Committee member Shashikant Kushwaha and District Secretary Shankar Kol—had been arrested in the morning from the Robertsganj Party office in order to prevent them from attending the protest. The two leaders were detained for the whole day and released in the evening, while the 5 Party workers were sent to jail. 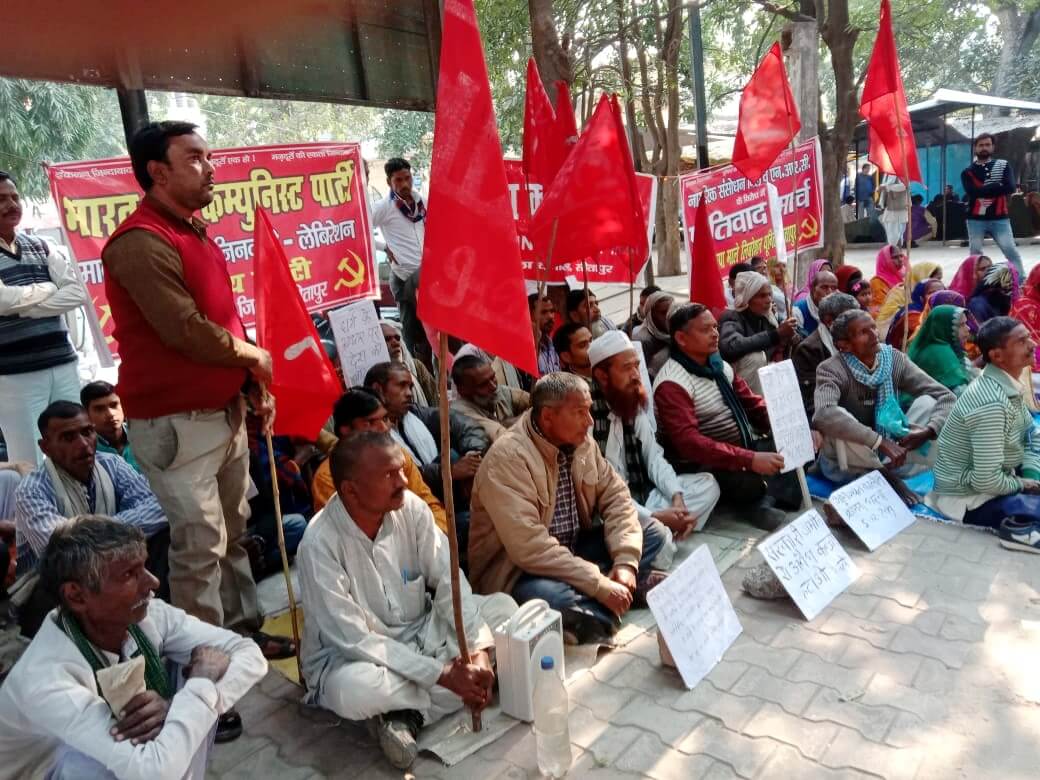 This is a blatant undemocratic and repressive action by the Yogi government. The party has demanded immediate release of all arrested activists and punitive action against the police personnel.

The CPIML Uttar Pradesh State unit has strongly condemned the arrest of 7 party workers including two senior leaders. They were also subjected to brutal torture inside the police station while in custody at Robertsganj (Sonbhadra).

The Gomati District Party committee holding protest demanding punishment to the perpetrators of Babri demolition and dismissal of MPs, Sakshi Maharaj and Pragya from Parliament, in Udaipur district of Tripura. An organised mob of RSS-BJP suddenly started attacking the leaders which was resisted by the people present. The goons retreated and again came back to set the CPIML party office on fire while the police and other officials took no action against them. The miscreants also attacked Party’s Tripura state secretary comrade Partha Karmakar injuring him. The RSS goons again came in night to attack the house of comrade Karmakar and other party supporters.

An FIR has been filed against this incident but so far no satisfactory action was taken by the administration. The CPIML central committee has condemned this goondaism and continued attacks on left activists in Tripura demanding stringent action. Many state units of the party have also issued statements against this vandalism. The party has said that militant resistance at ground level will be left as the only action if such atmosphere of state protected vandalism continues to prevail in this BJP ruled state. 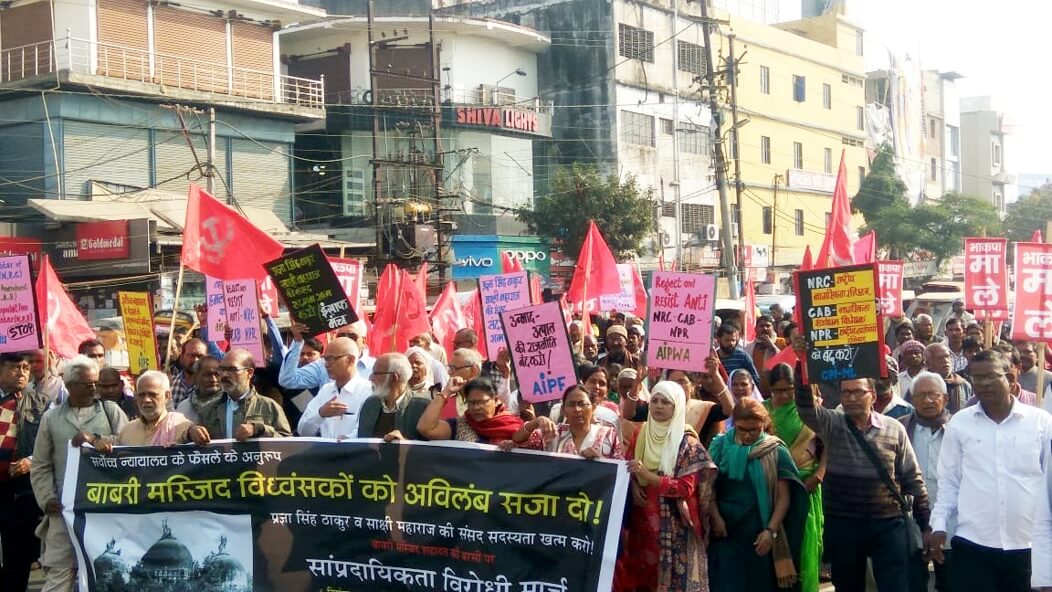 In Uttar Pradesh, a joint dharna was organized in the capital Lucknow at the Ambedkar Statue in Hazratganj by CPIML, CPI, CPM, Forward Bloc and other Left parties. Protest marches and meetings were also organized at Ghazipur, Ballia, Mau, Mirzapur, Sonbhadra, Jalaun, Pilibhit, Sitapur, Moradabad, Mathura and other Districts. 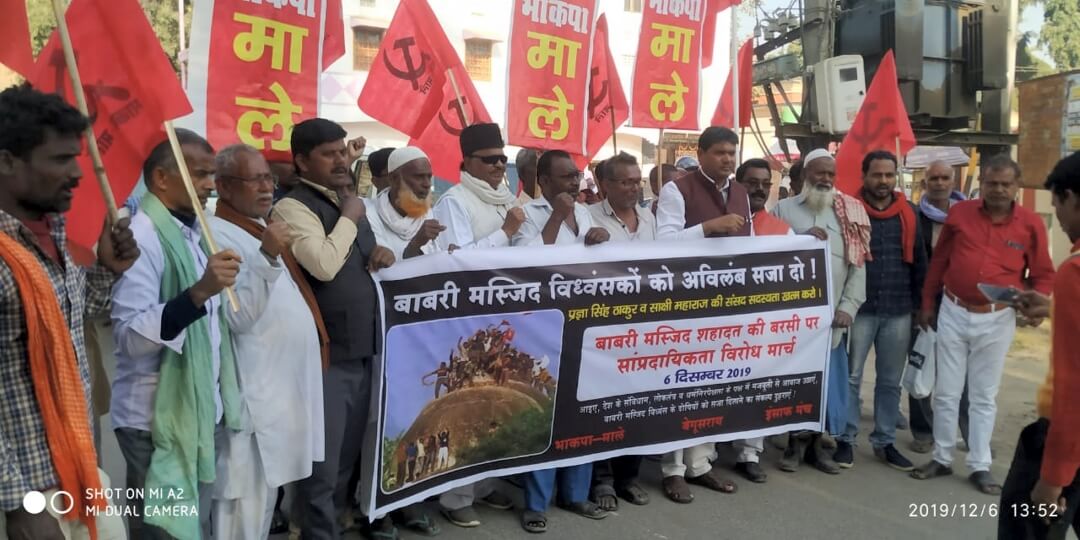 Protest rally and public meeting was held at Tenali of Guntur district. A campaign was conducted distribution leaflets in various places in Dibrugarh, Tingkhong in Assam. A dharna was held in Haldwani, Uttarakhand. In Autonomous district of Karbi Anglong a massive dharna was held in Diphu. 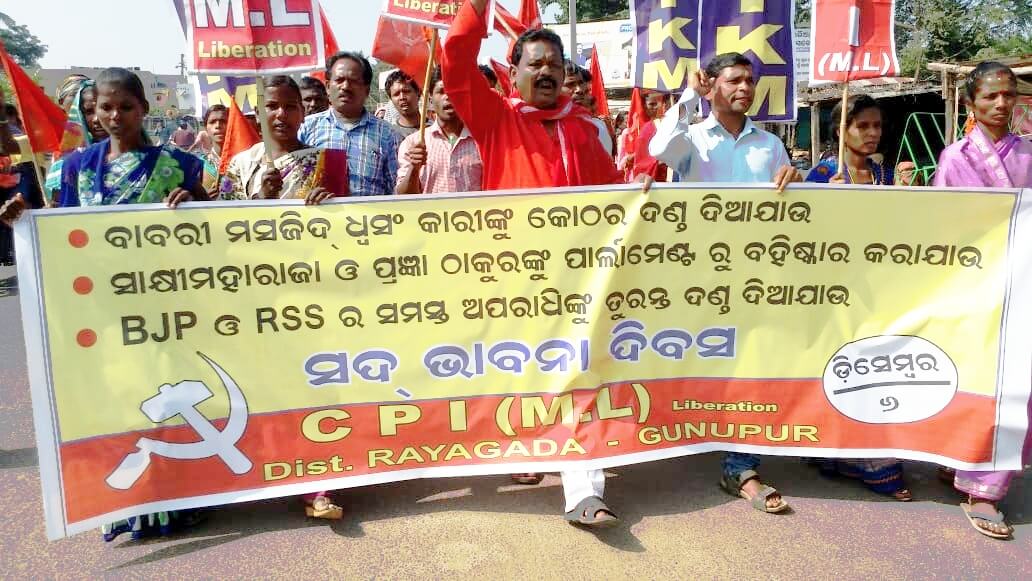 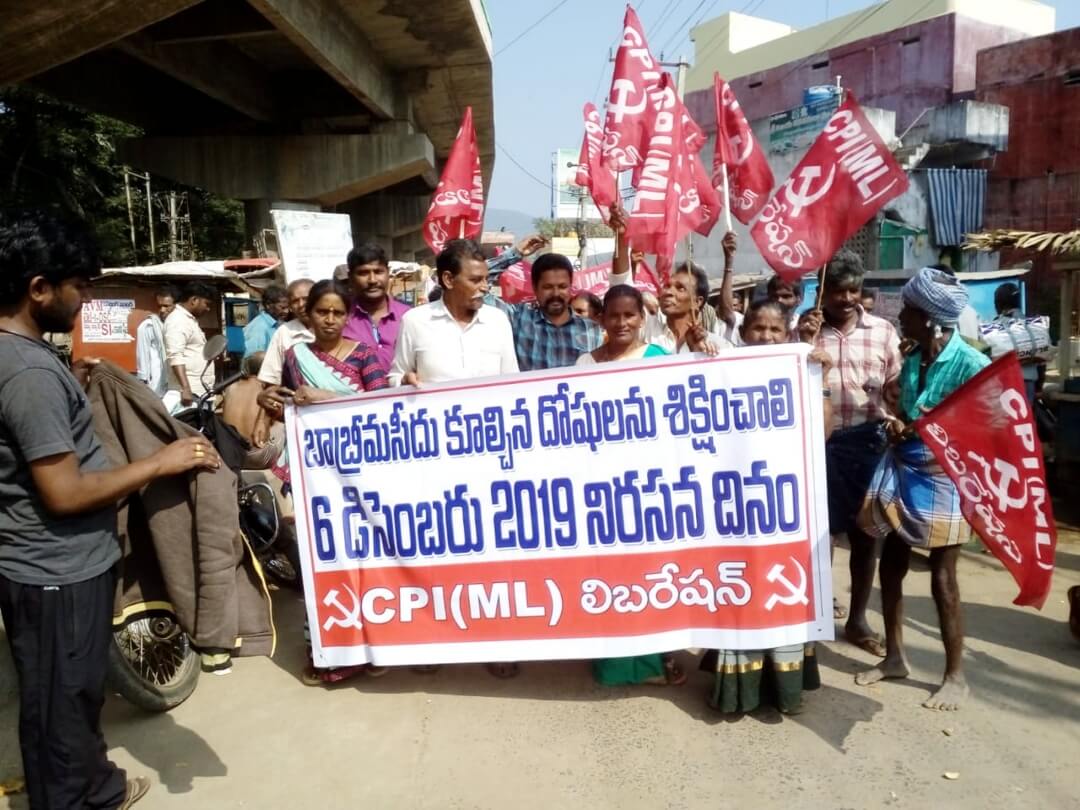 Marches were organised at places in Odisha including Rayagada and Bhubaneshwar districts. A memorandum was sent to the President from activists in Jind district of Haryana.

In Puducherry, a protest demonstration was held at Karikalampakm. The protest was led by Murugan, state committee member of the party. Balasubramanian CCM, Motilal state president of AICCTU, AIARLA leader Palani and Maliga AIPWA president in the UT addressed the demonstrators. 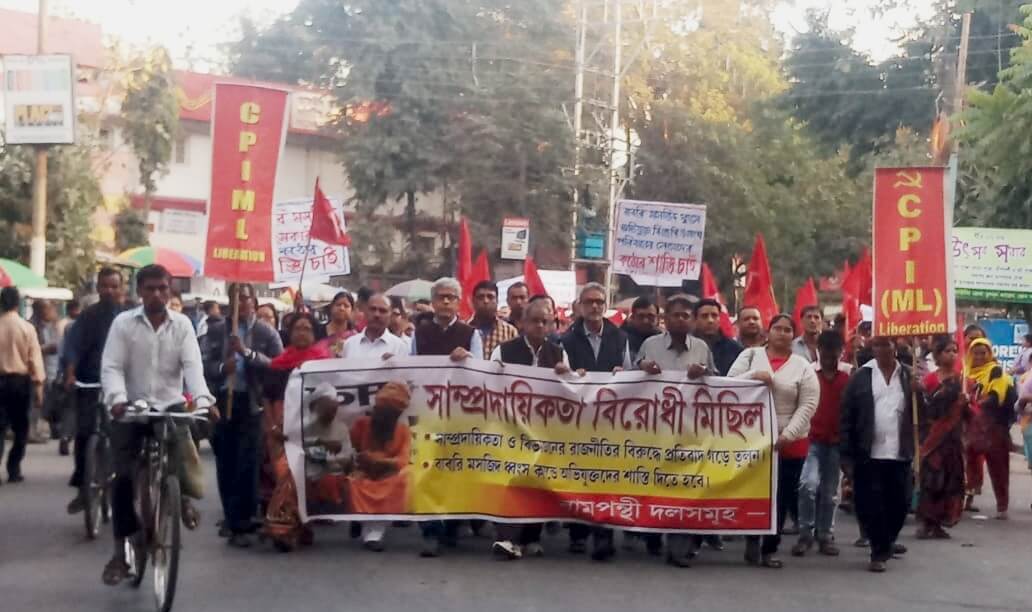