Protest in Delhi in Support of Telangana Transport Workers 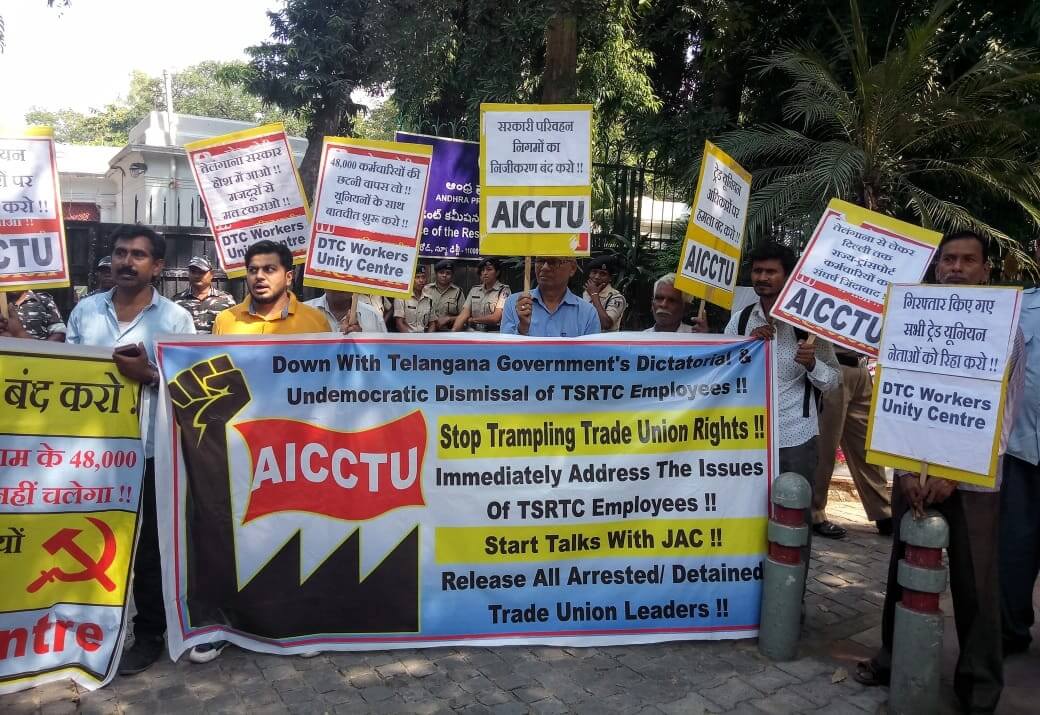 AICCTU held a solidarity protest at Telangana Bhawan, New Delhi, on October 9 against the dismissal of 48,000 TSRTC employees in front of Telangana Bhawan. Workers from DTC Workers’ Unity Centre in Delhi Transport Corporation participated in good numbers in the protest. The protesters submitted a memorandum demanding revocation of Telangana government’s draconian move. The recent dismissal of 48,000 striking employees of Telangana State Road Transport Corporation has raised serious question marks over the handling of labour issues by the different political parties and governments. While it is commonplace for different leaders and parties to promise perks and benefits to the workers before any elections, most tend not only to forget those promises but even go to the extent of doing exactly the opposite. The completely undemocratic and dictatorial dismissal of 48,000 employees by Chief Minister Y Chandrasekhar Rao, is a classic case of leaders fooling the employees first and arm twisting them after getting elected.

India is a country with abysmal public transport system, most of the states which still manage to cater to the needs of common people, do so because of state transport corporations or other state government undertakings. These corporations or undertakings are now being threatened because of different state governments going ahead with efforts to privatize existing state run transporters. These policies are in sync with the Narendra Modi government’s anti-people announcements of rapid privatisation of all public sector undertakings and government institutions.

However, the heroic resistance put-up by different trade union organizations as well as national and state level programs undertaken by Central Trade Union Organizations, have stood in the way of such anti-people measures. Be it Haryana, Rajasthan, Delhi, Tamil Nadu or Telangana – employees of state run transporters have given tough resistance to anti-worker moves of their respective governments. Such movements like the strike in Delhi Transport Corporation or Haryana Roadways have generally been met with threats of dismissals and other coercive actions. The dismissal of 48,000 TSRTC employees is similarly an effort to curb the resistance of workers against K Chandrasekhar Rao’s attempt to privatise and destroy TSRTC. 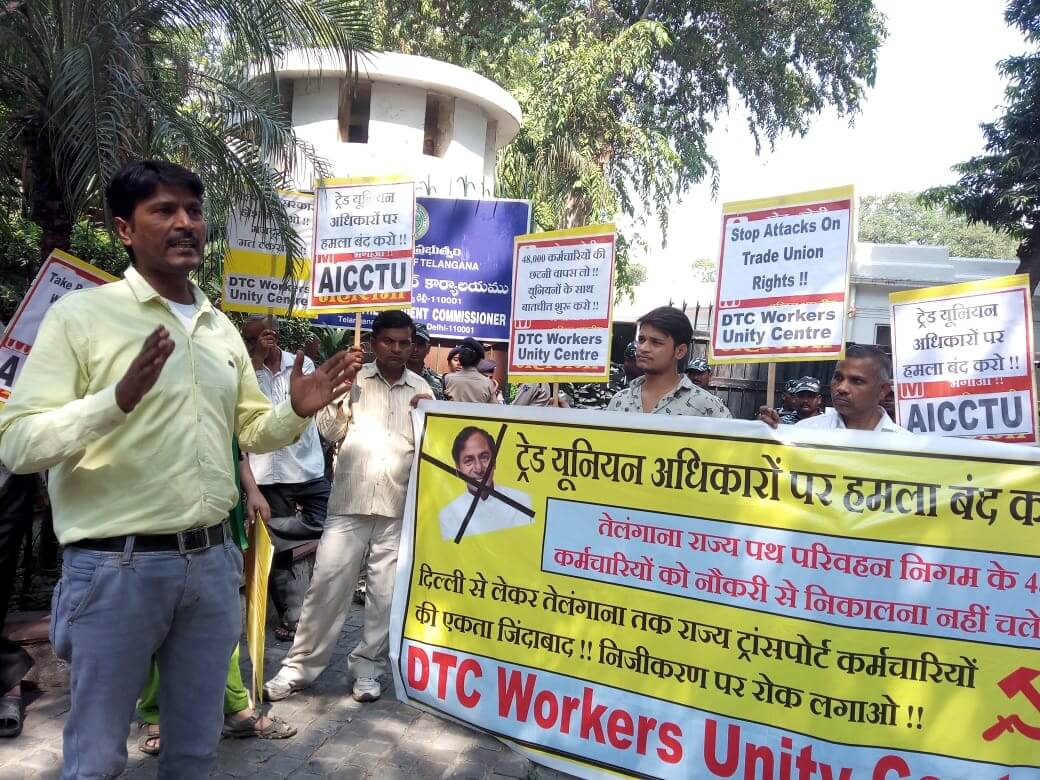 The Joint Action Committee of TSRTC had served the strike notice well in advance to the authorities, however the state government failed to even have effective talks with the workers. Such arrogance and disregard for democracy have become the order of the day. KCR’s contempt for democratic processes and attack on workers’ rights is very worrying. The dismissal of 48,000 workers is completely illegal and meant to pave the way for unhindered privatization of public transport. Last year, even in the national capital, the AAP led government had refused to initiate talks with DTC employees who had served strike notice well in advance to the management. The striking Haryana Roadways employees had to face punitive action by the incumbent BJP government during their agitations against introduction of private buses.

Santosh Roy, President, AICCTU-Delhi while addressing the protesters said, “The Telangana CM thinks that such moves would break the spirit of unions fighting for the larger good of people against privatization. But similar moves by governments everywhere have been defeated by broader unity of the working classes. He must not forget the results of the folly committed by late CM of Tamil Nadu, J.Jayalalithaa. AICCTU is committed to struggle and determined to win this battle against privatization and other anti-people moves.”

Rajesh Chopra, General Secretary, DTC Workers Unity Centre, said, “Today the governments want to privatize everything. Modi is selling Air India, Indian Railways, Bharat Petroleum and many other PSUs, Telangana’s CM is keenly following him by privatizing TSRTC. One Chief Minister, however powerful cannot match the strength of lakhs of employees across the country, who are fighting against the tyrants ruling different states as well as at the centre. Our united struggle will pave the way for tomorrow’s India, a better India.”

The protest was concluded after raising slogans and a small performance by Sangwari Cultural Group.