NRC Final List And Its Aftermath: A Massive Humanitarian Crisis That India Must Avert 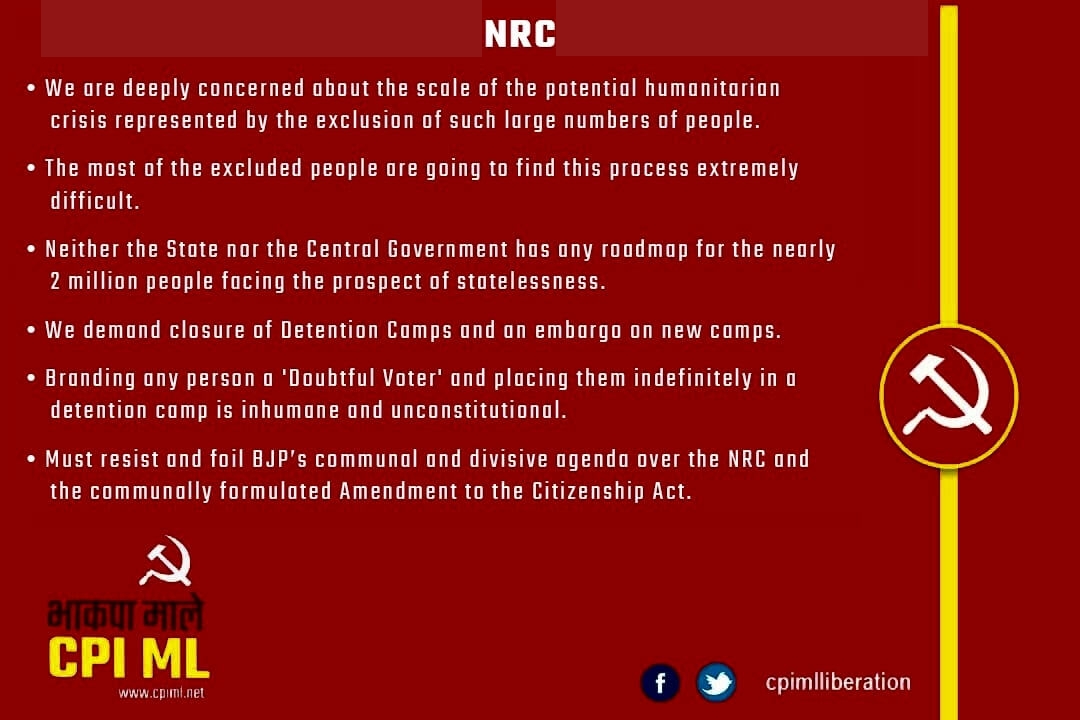 PEOPLE in Assam on all sides of historical debates and divisions, had hoped that the publication of the final list of the National Register of Citizens in Assam would finally put their anxieties at rest and bring a sense of closure and relief. Instead, the fact is that publication has given a new lease of life to divisive politics in the state, and has not eased anxieties for any section of Assam.

19,06,657 persons stand excluded from the final NRC list. These 19 lakh plus people are at the mercy of a tortuous bureaucratic and legal exercise which is riddled with arbitrariness and bias. Moreover, there is complete uncertainty about their fate if, at the end of the exercise, they are unable to achieve recognition as citizens. The spectre of statelessness haunts them.

Even for the 3,11,21,004 people whose names have made it to the final NRC list, there is no closure. Assam Public Works (APW), the original petitioner in the NRC case in the Supreme Court, has announced that it will move Supreme Court seeking a complete re-verification of the NRC list, alleging that “illegal immigrants” have made it to the list. The All Assam Students’ Union (AASU) has also expressed its intention to move the Supreme Court seeking 30% re-verification, saying that they expected far more exclusions. Asom Gana Parishad (AGP), an ally in the current Assam Government, has also said the Supreme Court must review the list since the number of exclusions is too small and does not fit the narrative of massive “illegal infiltration” that it has been pushing.

Meanwhile the BJP leader and Assam Finance Minister Himanta Biswa Sarma has called upon all the AASU and APW to join the State Government in petitioning the Supreme Court to demand re-verification. Sarma has added that his party will ask the Central Government to include Assam in a national NRC exercise that will follow the enactment of a Citizenship Amendment Bill (CAB). The CAB is essentially BJP’s way of fine-tuning NRC to be weaponised against Muslims alone.

Re-verification - subjecting the people included in the final list to a further ordeal must be categorically rejected and resisted. But even if re-verification were to be ruled out, those who made it to the final list are still insecure and vulnerable. As Sarma has pointed out, the State Border Police still has the power to refer “suspected foreigners” to the Foreigners Tribunals (FTs) even if their names figure on the final NRC list.

The entire NRC process was marked by an inherent anti-poor, anti-people bias. The Supreme Court driving the NRC process kept changing the goalposts and introducing new obstacles, jeopardising instead of upholding the Constitutional rights of residents of Assam. The result was inevitable. Lakhs of the poorest and most vulnerable have found that they have lost the obstacle race, which seemed designed to exclude them. Large numbers of women and children are excluded from the list even when their kin are included.

What lies ahead for those excluded, or those who are included but whose citizenship may yet be questioned? The Government has made vague promises that citizenship rights of the excluded will not be curtailed pending the legal process of appeal. But there are grounds for all those affected to dread the appeals process in the Foreigners Tribunals (FTs). In the first place, the FTs are far too few right now to cope with the huge number of applicants, who have 120 days within which to file their appeals. The onus of filing these appeals is entirely on the excluded persons - not on the State.

Moreover, the FTs, presided over by lawyers without any judicial training, have been notorious for bias and callousness. It emerged that FTs had been informally competing for the maximum number of “wickets taken” (i.e maximum number of persons excluded). The fate of nearly 2 million persons (and perhaps more, if Border Police refers those on the NRC list to FTs) cannot be left in the hands of such quasi-judicial FTs which are little better than khap panchayats. At the very least, these persons must be given access to a robust judicial process, with the State having the responsibility of ensuring that each and every person gets legal and logistical help as well as emotional counselling and moral support throughout the process.

Till now, those deemed ‘doubtful voters’ or ‘foreigners’ by the FTs had been consigned indefinitely to “detention camps” which were inhumane and no different from concentration camps. Reportedly the Government has been constructing massive new camps to accommodate those excluded by the final NRC list and deemed “foreigners” by the FTs. Detention camps are an atrocity and unconstitutional - existing ones must be shut down and there must be a ban on the construction of any new camps.

In an appeal issued to the students and youth of Assam in 1979, the CPIML Central Committee had urged young people to direct the Assam Movement towards issues of unemployment and uneven development that discriminated against Assam. It had suggested that the way to preserve Assam’s linguistic and cultural uniqueness and autonomy, and fight the colonial legacy of cultural hegemony of a class of Bengali intellectuals, was not to target poor migrants and immigrants as the enemy. It had warned that only imperialists and domestic reactionaries would benefit from such rifts, never the Assamese people. Today, the spirit of that appeal is more relevant, with the ruling BJP out to exploit political dividends for its fascist project from the post-NRC climate of fear and suspicion.

The Assam experience should serve as a warning to the rest of the country. While the BJP is admitting that the prolonged NRC process in Assam was “flawed”, it is insisting that it will extend NRC to the rest of India! When the Assam exercise itself has given birth to a massive humanitarian crisis, there can be no basis for extending it to even a single other Indian state.

We call upon all democratic people and movements all over the country to alert people to recognise and reject the BJP’s NRC designs, and to stand in unconditional solidarity with each and every person rendered vulnerable by the NRC-FT exercise in Assam.