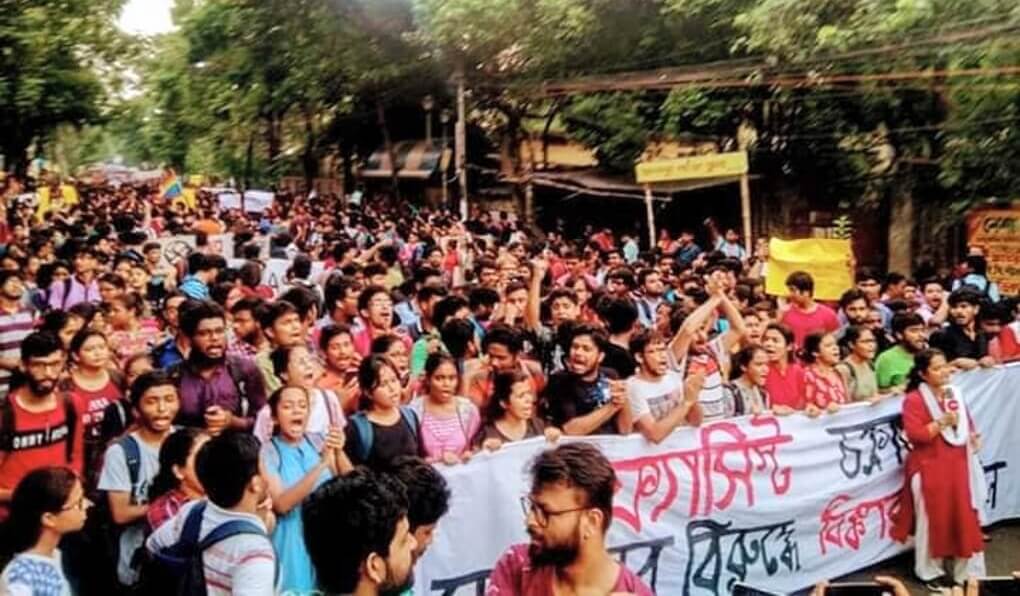 THE Sangh-BJP assault on universities, students and academic communities continues unabated. Having failed to stop the JNU students from giving yet another emphatic mandate to the Left in the recent JNUSU election, the Sangh brigade has once again turned their attention on the Jadavpur University in Kolkata, another prominent Left campus in the country. But in the process, it has once again exposed its anti-student anti-education fascist face.

It all started with the entry of two BJP leaders – Babul Supriyo, MP and junior minister of the Modi cabinet, and Agnimitra Paul – in the campus accompanied by their security guards. As students began to raise slogans against the minister and against Modi government’s policies, especially the devious NRC design, the minister chose to confront the students with provocative remarks, including suggestive sexist remarks against female students. Scuffles ensued between the thuggish Babul Supriyo and student protesters, the VC rushed in only to be humiliated and insulted by the arrogant and ill-mannered junior minister of the Modi cabinet. Protesting students then gheraoed the minister demanding apology for his remarks, but soon the Governor entered the campus against the wish of the state government and whisked away the minister. And then for some time it was free play for ABVP and BJP goons who went on vandalising the campus and the student union room. 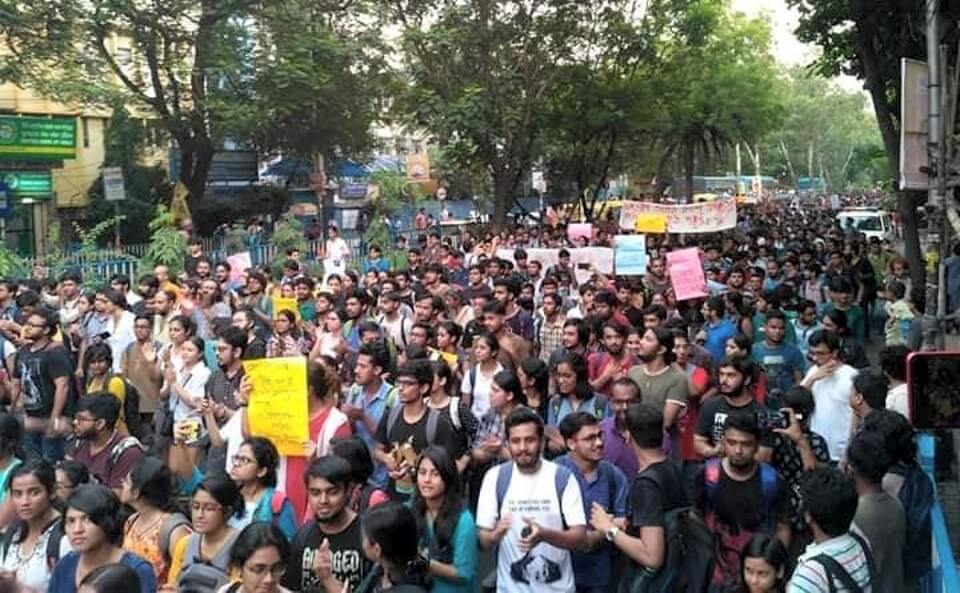 If this was not shocking enough, the president of the West Bengal unit of BJP, who is also a sitting MP, Mr Dilip Ghosh has now joined the show with a call to his party cadre to carry out an Operation Balakot to destroy the Jadavpur university which he describes as a hub of anti-national activities. True to the misogynistic mindset of the BJP leadership, Mr Ghosh has also sought to slut shame the female students of Jadavpur.  But the BJP propaganda squads and large sections of the dominant media have of course been busy portraying the students as attackers and the BJP leaders as victims. They think they can demonise the Jadavpur students much the way they had campaigned against JNU and the JNU students with their doctored videos, branding them as the so-called ‘tukde tukde gang’.

But like the students of JNU, Jadavpur students are also fighting back brilliantly. The very next evening after the Babul Supriyo thuggery and ABVP-BJP vandalism in the campus, thousands of students from Jadavpur and other universities and alumni of Jadavpur took out a massive solidarity march. They expressed their determination to resist the despotic offensive of the Modi-Shah regime with slogans and songs (the iconic Italian anti-fascist resistance song Bella Ciao became Babul Jao or Go Away Babul in their creative parody rendering). On 23 September when some two hundred-odd ABVP hooligans threatened to march to Jadavpur to ‘skin anti-nationals’ (carry out Operation Balakot in the words of Dilip Ghosh), teachers and students in their thousands formed a human chain outside the campus gate, and declared their roaring resolve in slogans and banners: Jaan thaakte haarbo na, Fascivad maanbo na’ (No giving up while alive, No surrendering to fascism). 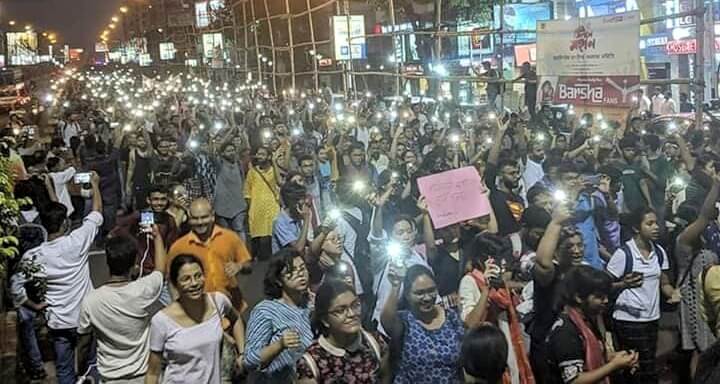 The Jadavpur protests have rekindled memories of the historic Hok Kolorob movement five years ago when students of the Jadavpur University had fought for months together against police brutality and sexual harassment, forcing the adamant TMC government to beat a retreat and concede the students’ demand for removal of the Vice Chancellor. This time round, the battle is directed against the rampaging BJP and it has a much bigger resonance in the context of the countrywide battle for democracy.

The spectacular showing of the BJP in the last Lok Sabha elections has emboldened the saffron brigade to go on a rampage in West Bengal. The alarming electoral decline of the Left, especially the shift of large sections of the Left base to the BJP in the name of combating the misrule and tyranny of the Mamata Banerjee government, gave a further boost to the BJP camp. The resistance put up by the students and teachers of Jadavpur University holds out a reassuring sign of people’s power and determination to take the fascist bull by its horns. 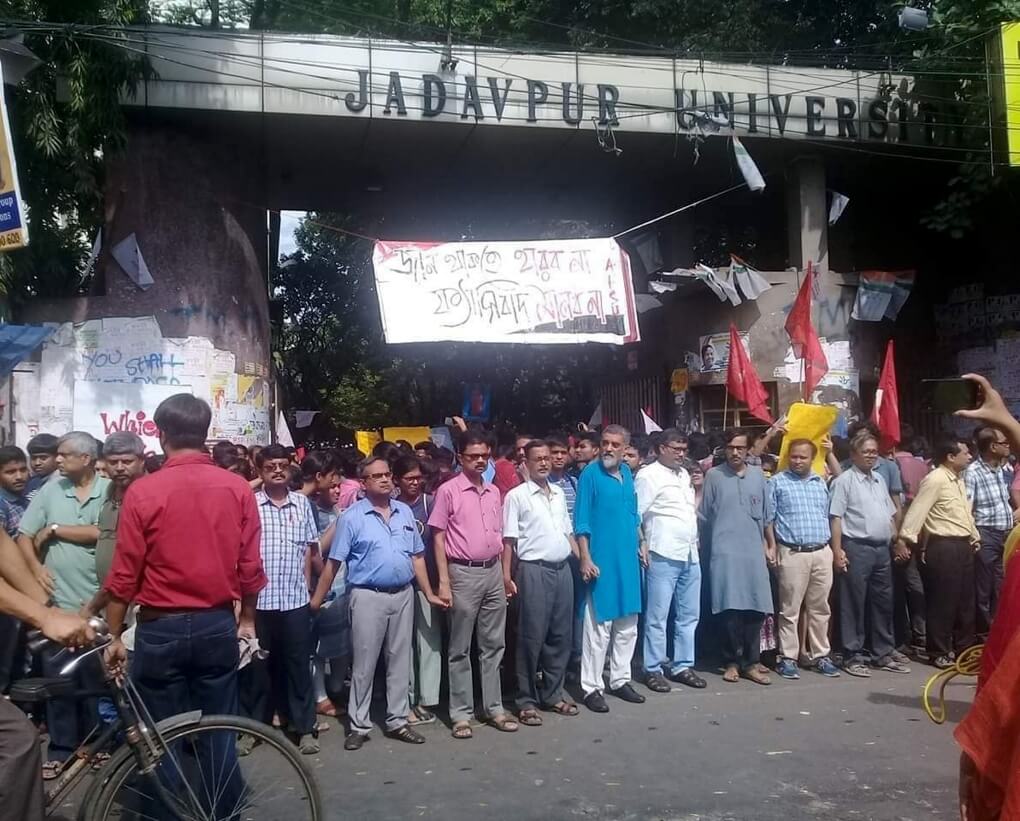