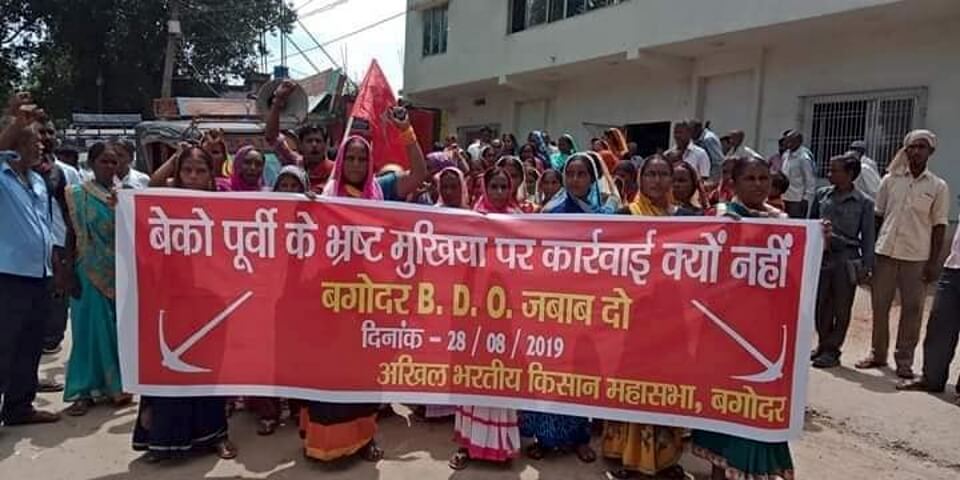 JHARKHAND Chief Minister Raghuvar Das inaugurated with full state pomp and pageantry on 28 August the much-awaited and ambitious Konar Canal Irrigation Project in the North Chhota Nagpur Division. Barely 10 hours after the inauguration the canal broke when water was released into it, completely destroying hundreds of acres of paddy, groundnut, maize and other crops in half a dozen villages of Kusamraja Panchayat in Bagodar Block.

In his inaugural address, CM Raghuvar Das had heaped praises on his own government and boasted that the BJP government had performed the miracle of completing the 42 year-long pending Konar Canal Irrigation Project within 5 years of its rule. However, the truth is that of the 19 years of Jharkhand’s existence, more than 15 years have been under BJP rule.

After the dam broke within 10 hours of the inauguration the burning question is, why did the 2200 crore Konar Canal Project break as soon as water was released into it? The government constituted a high level departmental enquiry committee which pronounced the ridiculous conclusion that rats were chiefly responsible for the breaking of the dam, and this was reaffirmed by the Bagodar BJP MLA speaking on a TV channel.

It is to be noted that 42 years ago the Konar Canal Irrigation Project had been announced which would cover more than 85 villages in the Giridih-Bokaro and Hazaribagh regions. The initial expenditure was to be 11 crores but in 2014 the Raghuvar government hiked it to 2200 crores. It is a moot question why such a hugely expensive Project broke within 10 hours and destroyed hundreds of acres of crops.

In the morning of 29 August former Bagodar MLA Vinod Singh reached the spot to take stock of the huge and extensive losses due to the breaking of the dam. He said that the government inaugurated the Project in a hurry to reap electoral benefits in the upcoming Assembly elections, but instead the farmers are facing a great disaster. He pointed out that the canal was supposed to be 200 km long but it was inaugurated when the construction had barely reached 60 km. This disaster has exposed the lies, loot and corruption of the Raghuvar government.

On 30 August a delegation from the Jharkhand Gramin Mazdoor Sabha (JMS) and All India Kisan Mahasabha and CPI(ML) supported Panchayat representatives visited the spot and spoke with the affected farmers. Addressing a Press Conference, they said that the Raghuvar government, BJP MPs and MLAs have ruined poor farmers in their selfish haste. They demanded that a case should be registered against the guilty officials as well as BJP people’s representatives, and the affected farmers should be given compensation worth 4 times their lost crops. They said that negligence, loot and huge corruption are the cause of the breaking of the canal. They condemned the BJP MLA Nagendra Mahto who did not go even to meet the affected farmers but shamelessly said that rats are to blame for breaking the canal! The BJP MP representing the region has neither met the affected farmers nor even issued a statement on the disaster. The delegation comprised JMS General Secretary Parameshwar Mahto, Kisan Mahasabha State Secretary Puran Mahto, Bagodar West District Councilor Punam Mahto, and Bagodar Deputy Pramukh Sarita Sao.

The Giridih District Deputy Commissioner visited the spot on 30 August and said that negligence and technical faults are the cause for the canal breaking. The same day, local BJP MLA Nagendra Mahto visited the spot and blamed the Opposition for the canal breaking. Clearly, this is an attempt to divert the people’s attention from the huge corruption involved in the Project.

A delegation led by AIKMS District Secretary Puran Mahto met the Giridih Deputy Commissioner on 13 September and submitted a memorandum. The memorandum submitted that more than 4 dozen farmers lost their crops over 28 acres and 72 decimal land, and huge amounts of mud has filled their fields. Embankments of ponds and fields have been washed away. The memo appealed for speedy payment of compensation for the losses amounting to Rs 33, 29 000.

When the government and officials took no positive steps for adequate compensation, the farmers of Bagodar Block (Ghosko, Pratappur, Khataiya, Bholghada, Barwadih) met and took the unanimous decision that until adequate compensation is paid they will not allow the construction of the canal embankment.