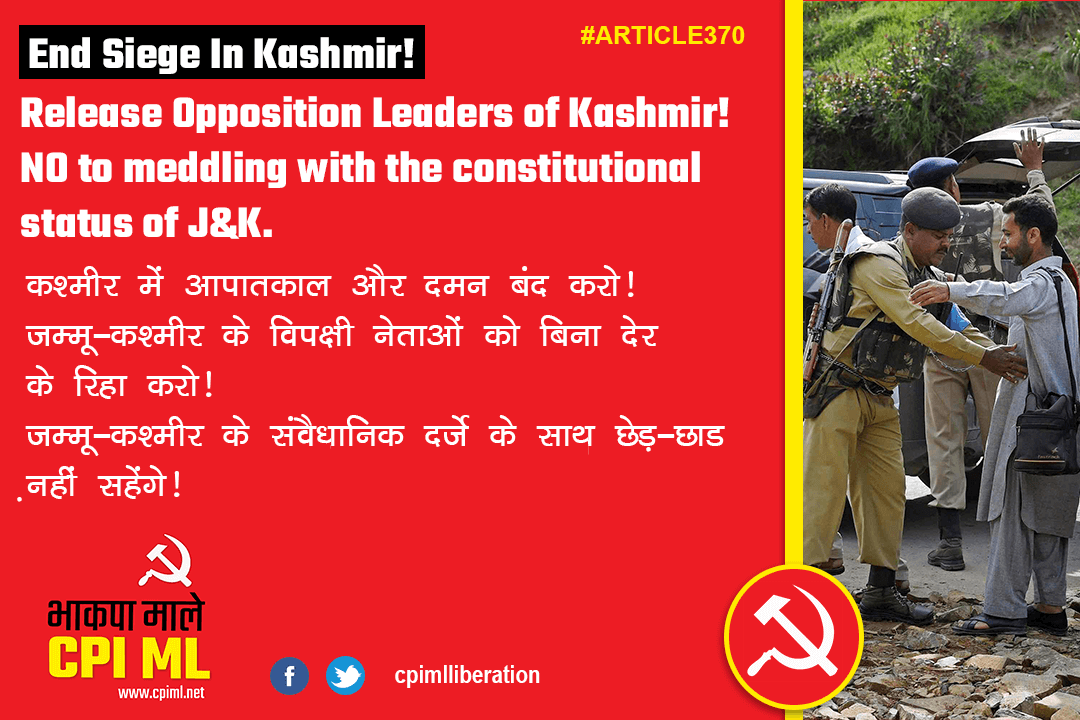 AFTER days of speculation and intriguing signals, the Modi government suddenly revealed its plans regarding Jammu and Kashmir on 5 August. It is nothing short of a constitutional coup carried out in a very shrewd and conspiratorial manner. Through a Presidential Order invoked under Article 367, the government changed the interpretation of key clauses of Article 370 thereby virtually scrapping it without moving any explicit amendment to that effect. Along with it Article 35, which gave certain special protections to the people of Jammu and Kashmir, the likes of which are also available to the people of several special category states of India in the North-East and in the neighbouring state of Himachal Pradesh, was also scrapped.

The Modi government’s bulldozer however did not stop here. It went on to dismantle the very state of Jammu and Kashmir, reducing it to two centrally administered Union Territories – Ladakh and Jammu and Kashmir. The status of Ladakh will be akin to that of Chandigarh, which is a UT without an Assembly of its own, while J&K will have an Assembly without the powers of a state, something akin to Puducherry, or at best Delhi. There have been instances of upgradation of a UT to a state like in the case of Goa, or several instances of bifurcation of states, the most recent one being the carving out of Telangana from the erstwhile state of Andhra Pradesh. But this is the first time a state has been broken down into two Union Territories.

What has been most galling about the entire exercise has been its utterly conspiratorial, fraudulent and audacious nature. Any amendment regarding Kashmir cannot be constitutionally validated without the concurrence of the government of J&K. Any amendment to Article 370 calls for a reference to the now dissolved Constituent Assembly of J&K. Through yesterday’s Presidential Order, the Constituent Assembly has been interpreted as the State Assembly. But with the State Assembly having been dissolved in Jammu & Kashmir, the concurrence of the Governor, who represents the Centre in the State, has been treated as concurrence of the state. Herein lies the Modi government’s act of clear treachery with the Constitution. It is now very clear why the BJP first destabilised the state government by withdrawing support and then refused to have Assembly election along with the Lok Sabha election.

While keeping the people of Jammu & Kashmir absolutely in the dark, the Modi-Shah duo also made sure that the voice of Kashmir was completely silenced even as the state was not only stripped of its constitutional status and rights but even tricked out of its very existence as a state of the Indian Republic. By raising the bogey of terrorism and cancelling the Amarnath Yatra, the government had already deployed more than 30,000 additional security forces in Kashmir. Opposition leaders had all been placed under house arrest, internet had been shut down and a veritable curfew was clamped down to silence the voice of Kashmir. The constitutional and historical bridge that connected the state of Jammu and Kashmir to the rest of India was burnt down, the solemn constitutional commitment made to the people of Kashmir about protecting their Kashmiri identity (even Atal Bihari Vajpayee had promised to fulfil the aspirations of the people of Kashmir within the parameters of Kashmiriyat, zamhooriyat and insaaniyat, i.e., Kashmiri identity, democracy and humanism) was consigned to the waste paper basket just as Modi had junked 500 and 1000-rupee notes through demonetization.

The Modi government describes this constitutional treachery with the people of Kashmir as a victory for national integration. There cannot be a bigger lie. Far from bringing the people of Kashmir closer to India, this act of treachery has only pushed them away to deeper alienation. The fact that the government has brought the state under absolute central control clearly indicates that the government treats Kashmir only as a land mass with economic potential and strategic significance, and not as a people with their own identity and aspirations for dignity and democracy. This is much the same way the state treats the adivasis and the rural poor who are being subjected to massive eviction to enable the corporate land sharks to grab their land and resources. There can be no deciding the future of Jammu & Kashmir keeping the people of the state, the biggest stakeholder, out of the picture.

The injustice meted out to the people of Jammu & Kashmir should serve as an eye-opener for the whole of India. It is a pointer to the shape of things to come. By disregarding the Constitution on Article 370, the Modi government has made it clear that it considers the Constitution as just a document that can be arbitrarily interpreted and tampered with. If 370 can be effectively scrapped in the name of national integration, tomorrow the whole provision of reservation for SC/ST and OBCs can be scuttled in the name of social equality. In fact, we have already seen a beginning in this direction through the constitutional amendment providing for 10% reservation for so-called ‘economically weaker sections’ from the general category. If a state enjoying a special constitutional status can be summarily dismantled and brought under central control, tomorrow any state opposing the Modi government can be equally vulnerable to the Modi government’s marauding mission of centralisation. If the government can invoke ‘urgency’ to clamp down a veritable state of Emergency on Jammu & Kashmir, tomorrow democracy can be similarly suspended in any other state or in the whole of India.

Every democracy-loving Indian should stand with the people of Kashmir at this hour of betrayal and unequivocally call for restoration of the constitutional status of Jammu & Kashmir. All opposition leaders must be released forthwith and the normal democratic rights and communication and transportation facilities restored without any delay. The parliamentary majority of the Modi government cannot be treated as a licence to subject India to governance by arbitrary and conspiratorial means. On the eve of the 72nd anniversary of India’s independence, we must hold the government of India accountable to the constitutional foundation of unity in diversity and to the commitment of a secular, democratic and federal republic.