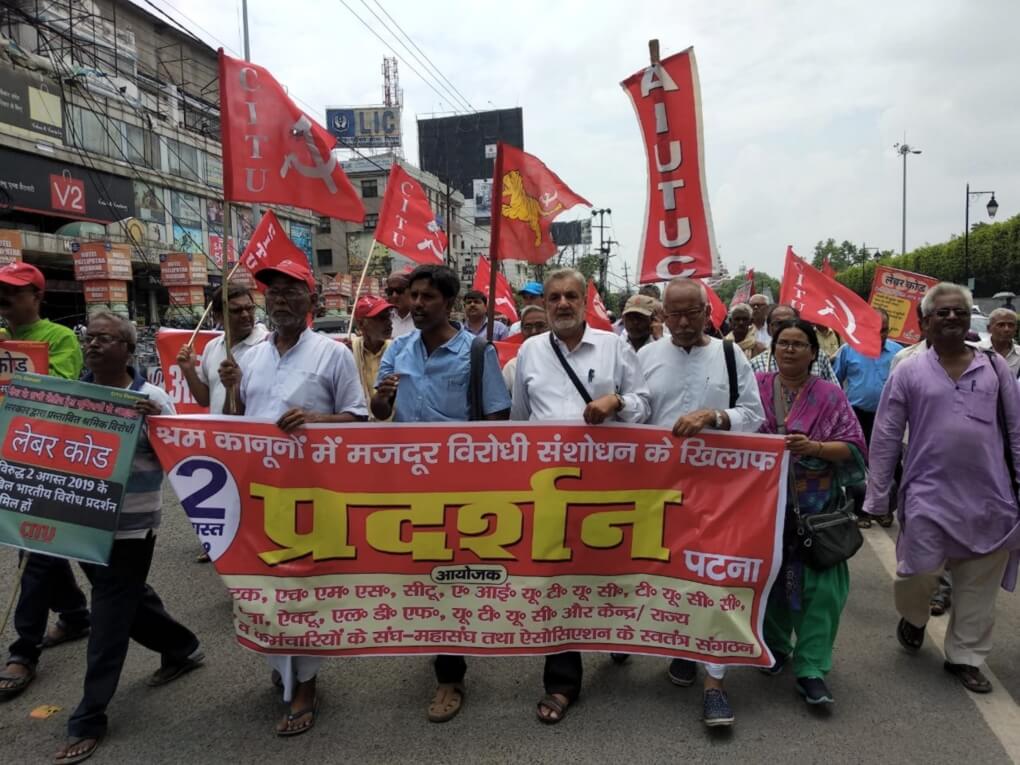 AICCTU alongwith other central trade union organizations and federations participated in nation wide protests against Code on Occupational Safety, Health and Working Conditions Bill and the Code on Wages Bill. The protests were jointly called by all central trade unions except RSS affiliated BMS, which chose to side with the government against the workers. Protest actions in Delhi were organized in Parliament Street. Workers from various sectors including building and construction, transport, domestic work, sanitation, banking, insurance etc participated in the protests.

The proposed Code on Wages Bill is being brought in to replace four laws – the Payment of Wages Act, 1936, Minimum Wages Act, 1948, the Payment of Bonus Act, 1965 and the Equal Remuneration Act, 1976. This bill if passed would affect millions of workers by making them more vulnerable to employers’ actions and would cause drastic drop in wage rates. Major flaws in the Code on Wages Bill include exclusion of apprentices from the definition of employee, whereas they are included in the existing laws. The bill also waters down the historic ‘Raptakos Brett’ judgment given by Supreme Court by doing away with criteria set for determining minimum wages. The time limit for revising wages has been set to five years in the current bill, whereas currently five years is the maximum period for the revision of wages. Some states like Tamil Nadu revise minimum wages at least once in a year, under the current law. One of the major changes proposed by the proposed Bill is to remove the posts of inspectors and bring in ‘facilitators’. The ‘facilitators’ even in cases of established violations would be bound to give an opportunity to the employer to comply, rather than launching prosecution as mandated in existing laws. The employers would no more be regulated by the government but would only be required to ‘self certify’, if the code bill is passed. As of now The Payment of Wages Act, 1936, Minimum Wages Act, 1948 and the Equal Remuneration Act, 1976 provide for fine and/or imprisonment as penalty. However, under the proposed code bill the penalty of imprisonment is done away with, at least in the first instance of violation. The code bill does not provide for an advisory committee as was required by The Equal Remuneration Act, 1976. One of the most dangerous aspects of this code bill is to do away with the ‘eight hour’ workday. In the name of urgent work, preparatory work, intermittent work, timely work etc employees can be forced to work for any number of hours. The clauses in Payment of Bonus Act, 1965 which allowed the workers to question the balance sheet of any company, will be done away with. Many ambiguous terms like ‘trial running of the factory’, ‘prospective stage’ etc provide ample space for employers to evade payment of bonus to employees.

Similary the Code on Occupational Safety, Health and Working Conditions Bill does away with more than a dozen acts meant for welfare of workers, which are as follows –

The Code on Occupational Safety, Health and Working Conditions Bill excludes several categories of workers, it insulates the ‘principal employer’ from liabilities towards contract workers employed through contractors. Penal provisions have been reduced, the bill seeks to enhance the limit of overtime hours from 50 hours per quarter to 100 plus hours per quarter. It further increases overtime hours to 124 hours per quarter in what it calls 'public interest'. The provision for 'creche' is done away with by substituting the relevant clauses with just a liability to provide a 'suitable room for children', rather than proper crèche facility. Further the definition of industry has been changed to exclude many activities of the government including departments dealing with defence research, atomic energy, space etc. This effectively leaves out many establishments which need rules and arrangements for occupational health and safety. 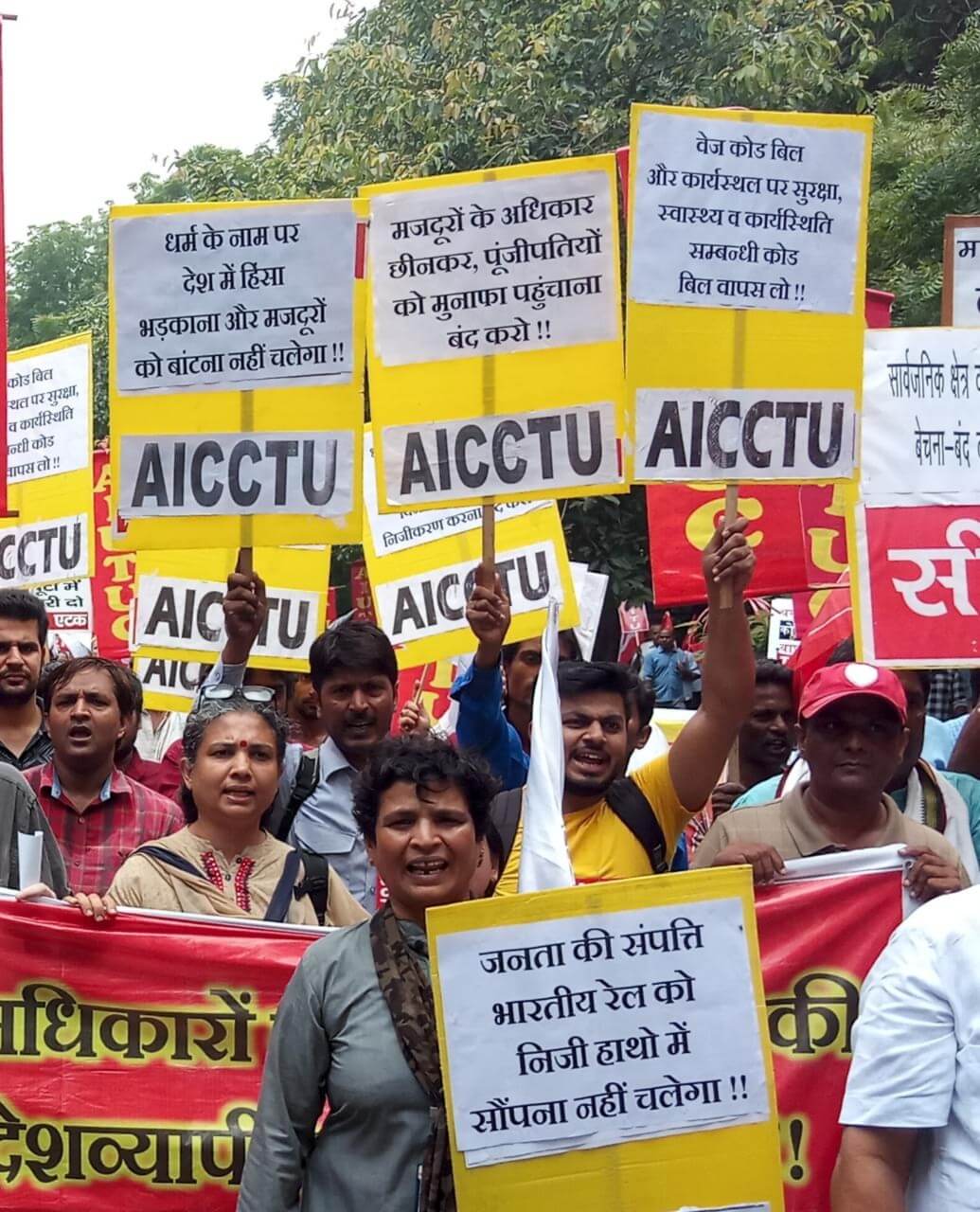 Addressing the workers, Rajesh Chopra, Joint Secretary, AICCTU Delhi said, "On the one hand, Modi government is rapidly dismantling labour laws and on the other it is trying to divide the toiling masses. Labour laws are being lynched inside parliament, and minorities outside it. We will not let this happen."

In Patna, under the joint national call by AICCTU, CITU, AITUC, AIUTUC, TUCC, and HMS, a protest was organized on 2 August 2019 by the central trade unions. Hundreds of workers held a protest march against the Modi government from Buddha Park to Dak Bangla Chowk where a protest meeting was held. They were protesting against the ending of 44 labour laws and also against changing calorie criterion for fixing wages from 2700 calories to 2400 calories. Among the leaders who spoke at the meeting were AICCTU leaders Ranvijay Kumar, Rambali Prasad, Shashi Yadav, Ganesh Shankar Singh (CITU), Ghaznafar Nawab (AITUC), Jitendra Kumar, Murtaza Ali, Manjul Kumar Das, Premchand Kumar Sinha and others. The speakers at the meeting said that the Labour Code Bill is anti-worker and presents workers to corporate houses as a gift of slavery. They said that workers across the country would continue the fight against this draconian measure till the repeal of this Bill and the end of the Modi government. AICCTU leaders said that protests were also organized at Ara, Jahanabad, Gaya, Biharsharif, Bhagalpur, Hazipur, Muzaffarpur, Darbhanga, Betiya and other places. 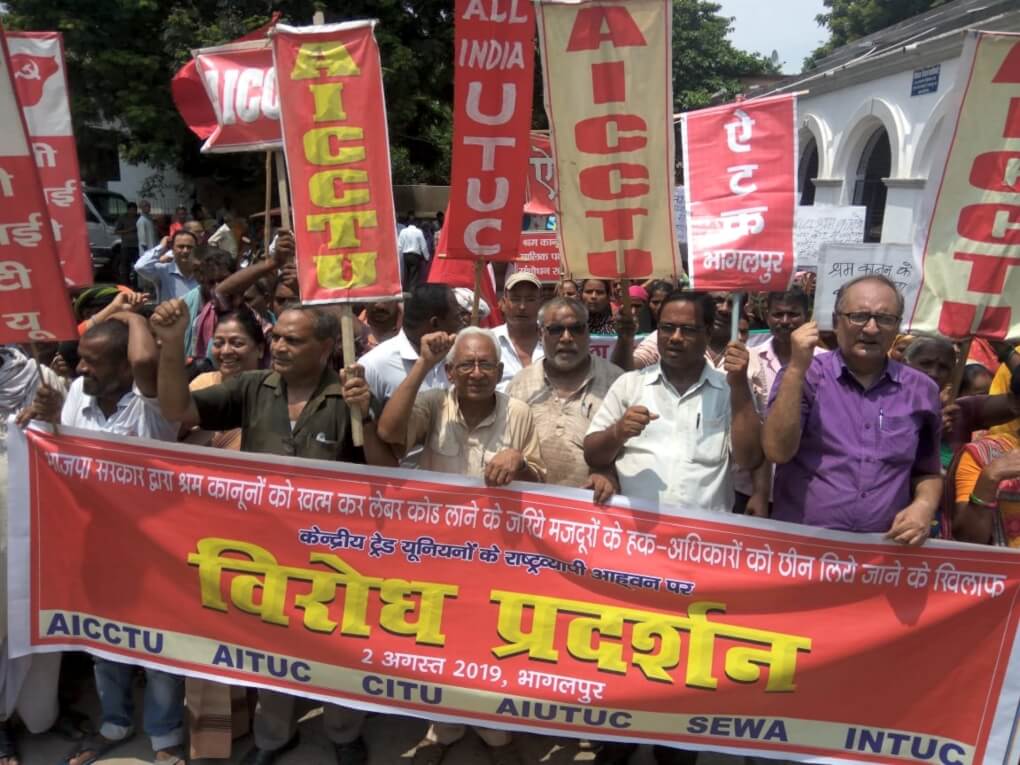 Bhagalpur Protest against Labour Code Bill: Hundreds of women and men workers under the banner of AICCTU on 2 August 2019 responded to the call by central trade unions and protested at the Bhagalpur Collectorate and cautioned the government. Earlier, workers in large numbers gathered with flags and banners at the Ghantaghar Chowk and raised slogans while marching towards the Collectorate via the Post Office, Kutcheri Chowk and Vakalatnama.

Trade union leaders speaking on the occasion detailed the anti-worker policies of the BJP. AICCTU leader RN Thakur said that the Labour Code Bill is a document which will push workers into a new era of slavery. He stressed that the working class would never tolerate this new form of slavery, and appealed to the Bhagalpur District officials to convey their warning to the government that the workers would fight till the end to revoke the Labour Code Bill.