Protests Against Eviction and for Fair Compensation in Assam 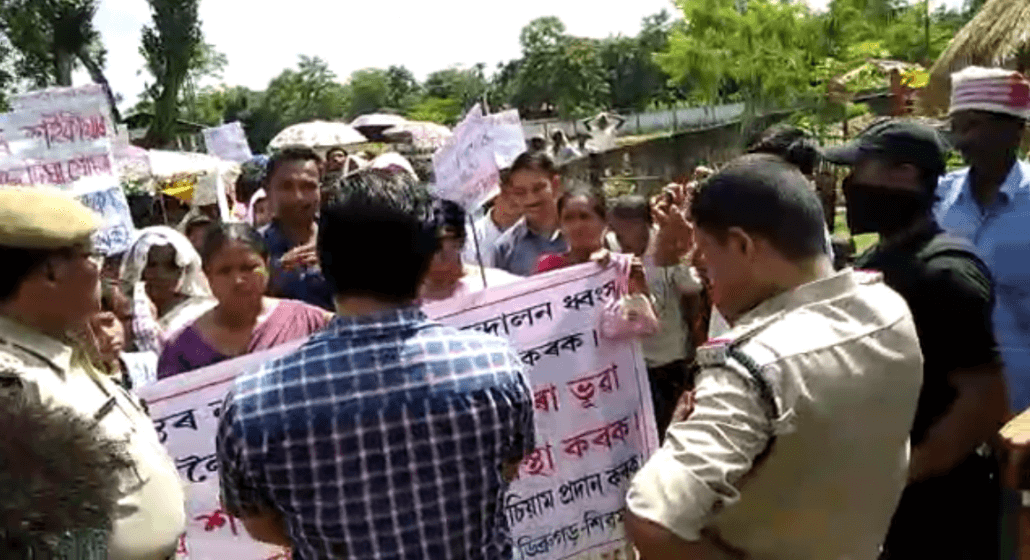 IN Assam, land is being grabbed from peasants in the name of construction of four-lane and national highways - without fair compensation. Many peasants from marginalised communities lack ‘pattas’ (evidence of land ownership), and they are denied any compensation.

The Khatigrasta Suraksha Mancha were formed in the year 2013 in Dibrugarh and in 2015 in Sonitpur district. These committees started the movement and fought for the rights of Highway-affected people to provide them their fair compensation.

More than 2000 acre land has been acquired from more than 1700 families in total 57 villages for the construction of NH 52B in Dibrugarh district of which about 550 acre of total acquisition land is government land. But only Rs/17000 to 100000 per bigha land, as classified under different category, have been fixed as the zonal value which was far below the all standards. On the other hand it was also notified that no compensation would be given to the government land acquired people. People formed the "NH 52(B) Compensation Demand Joint Committee.”

The Gazette notification was issued on May 16,2008 under the Highway Act, 1956. However when it comes to pay compensation to the affected families, the govt took the Land Acquisition Act, 1894.The 1956 Act states that an affected person should be given at least ten times of the cost of the present land value as compensation.

The most surprising fact is that the amount of compensation varies in different districts. Again the multi-crop land has been shown as no-crop land by the surveyors in Dibrugarh, leading to no compensation for crops.

The Dibrugarh MLA Bimal Bora opposed the affected people's movement and tried to crush the movement, with the connivance of police. Defying all blockades, the movement was a success. The MLA then conspired to malign the profile of CPIML leaders and implicate false cases against CPIML CCM Balindra Saikia in a bid to sabotage the movement. People, under the leadership of the Joint Forum, came out to street in protest on 17th August. The protesters tried to hold a procession demanding withdrawal of false accusations against Balindra Saikia and payment of due compensation to all affected families without any discrimination and submit a memorandum to the DC of Dibrugarh through the local SDC. As the rally was about to start from Aithan a place 2 km away from the SDC office, more than 300 protesters were arrested and detained in Rajgarh police station. The police clearly acted at the behest of the BJP MLA. The protesters who were arrested organised a meeting at the police station compound itself. The meeting was presided over by a member of joint Committee, Mr. Bitupan Bakliyal where many others delivered their speeches including Raheswar Sonowal, Pramod Sangmai, Ganesh Konwar, etc. The speakers condemned the arrest of the democratic protesters calling it "democracy killed under BJP régime". The speakers, amidst loud slogans and cheering by all protestors, unequivocally declared firm resolve to foil BJP conspiracy and carry forward the movement, demanded action against the local BJP MLA.