Deep Dissatisfaction in Jammu-Kashmir over Abrogation of Article 370 and 35(A), Government Lying on the Issue 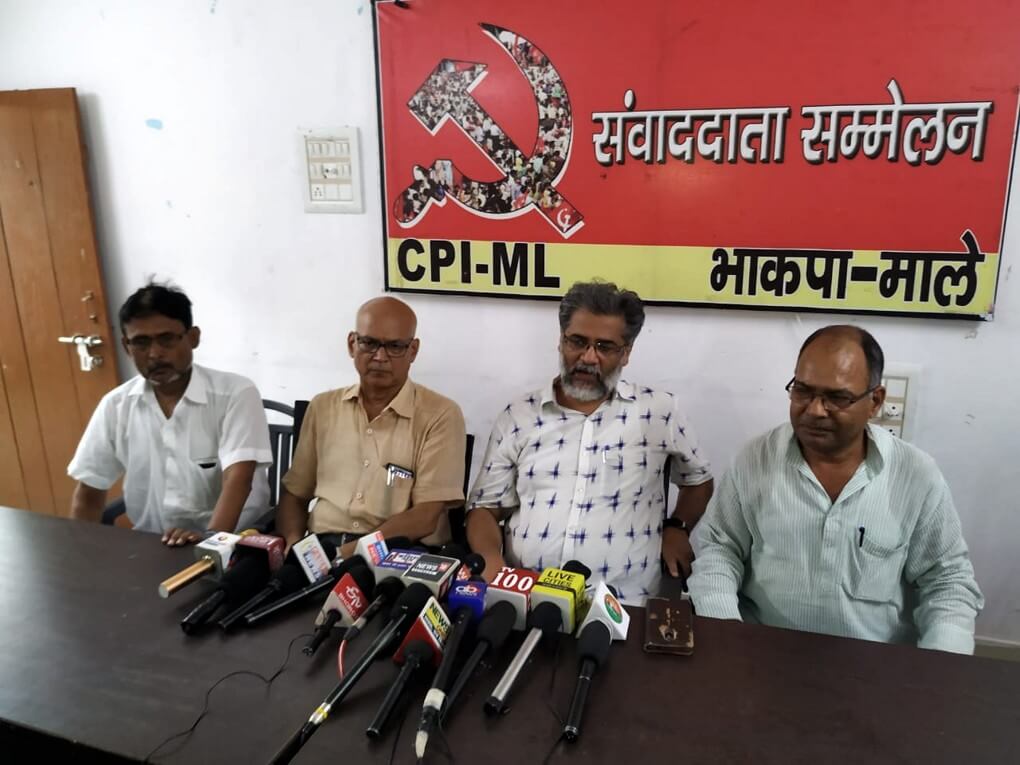 CPIML General Secretary Dipankar Bhattacharya addressed a press conference on the eve of Independence Day on 14 August in Patna where he told to the media persons that many Bills have been passed in the last session of Parliament without much discussion. Many changes have also been made in some Acts. The Amendment to UAPA which has been passed is extremely dangerous. It seems as if the Rowlett Act era is back. The Amendment to the NIA allows any citizen to be accused of terrorism and deprived of his human rights for two years; his property can be confiscated. This is very dangerous.

The Act which has been passed criminalizing Triple Talaq is a very dangerous sign for the judicial system as well as for the Muslim community. The safety of Hindu women should also be addressed, along with that of Muslim women. Much more necessary was an Indian Women’s Act, as that is the need of the hour for the women of the country. By not doing this, the government has played a communal game.

What has happened in Kashmir and the manner in which it was done is injustice not only to Kashmir but to the entire country, democracy, and the Constitution. The provisions of Article 370 have been continuously weakened over the past 70 years. The BJP abuses Nehru and blames him for the present situation, but we can see that Article 370 suffered the maximum corrosion during the Nehru era. It continued to be diluted during the Indira Gandhi government also. A popular leader like Sheikh Abdullah was jailed from 1953 to 1974. What could be a greater injustice?

But what has happened this time is worse than anything in the past. If Article 370 was to be abrogated, it should have been done according to the rules laid down in the Constitution. It should have been passed in the Kashmir Assembly. At present there is no Assembly in Kashmir. Therefore, the first thing to do should have been to conduct Assembly elections there. The BJP should have had no problem in doing that, since they are claiming that whatever was done was for the good of Kashmir. They could have fought Assembly election with this issue as their agenda, passed the abrogation of Article 370 in the Assembly, and then passed it in Parliament. Instead, what has been done was based on the opinion of the Governor. The opinion of the Governor is not the voice of the people of Kashmir. The Governor is part and parcel of the Government. This step has been taken by keeping Kashmir entirely in the dark.

It is now being said that all is well in Kashmir. This is also a total lie. Recently, a 4-member team had gone to Kashmir, including renowned economist Jean Dreze and CPIML Polit Bureau member Kavita Krishnan. They have released their report in Delhi. The claim that things are normal is a lie. People are in great distress there; they are not able to talk to their relatives. There is oppression throughout the State. There is great dissatisfaction in Jammu also. A very wrong message is being disseminated across the country.

The BJP’s claim that this will strengthen the unity of the country is also wrong. Unity cannot be secured at gunpoint and by alienating Kashmir. What has happened with Kashmir and the way it has happened will only alienate it. Many similar articles are in force in other States of the country also. Nagaland has been given what is being snatched from Kashmir, and more.

It has never before happened in India that a State has been stripped of its statehood and turned into a Union Territory. This is exactly like demoting an SP and making him a Hawaldar (sergeant). Bihar should also think about this issue. Nitish Kumar is demanding special status for Bihar, and this is a demand the CPIML also supports. Therefore, Nitish Kumar should make his stand clear on this matter.

The solution to Kashmir should be a political solution. Former Prime Minister Vajpayee had said that the solution to Kashmir should be on the basis of Kashmiriyat, Jamhoooriyat (democracy) and Insaniyat (humanity), but Prime Minister Modi has strangled Vajpayee’s advice. Today is the time to stand with the people of Kashmir. Today the entire country needs to stand with and for Kashmir.

In recent times, an attempt is being made to throw a veil over the country’s deteriorating economy by bringing the Kashmir issue to the fore. Jobs are being laid off on a large scale due to privatization. Railways and BSNL are retrenching workers. There is a huge recession in the automobile sector. Unemployment is increasing with frightening rapidity. The education policy is less an education policy and more a policy to push out students from education. The CBSE exam fee hike is being revoked after immense pressure. The intent of the government is clear. They want to make education and health a profit-making business.