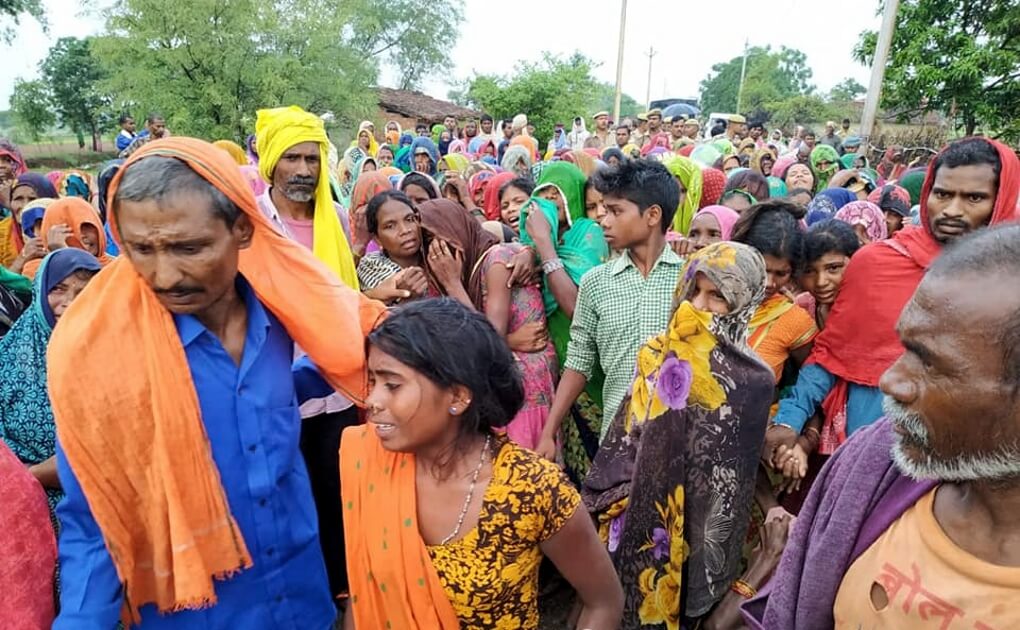 ON 19 July 2019, a village chief (gram pradhan) in Sonbhadra Yagya Dutta Bhurtiya, eastern Uttar Pradesh led several tractor-loads of gunmen into Umbha village, firing on Gond adivasis who were tilling their own land. 10 adivasis were killed in this massacre.

The Sonbhadra massacre underlines, once again, that Uttar Pradesh under the rule of Yogi Adityanath, has become a graveyard of justice and rights, where Dalits, minorities, adivasis and women are at the mercy of attacks, massacres and extra-judicial killings.

Significantly, no senior representatives of the Uttar Pradesh Government or the state administration rushed to meet the victims’ families and survivors. Instead, it was Opposition leaders - including a CPIML team led by the UP State Secretary - who were the first to visit Umbha village. The police tried to intimidate and threaten the CPIML team which reached the spot. The UP Government, in the most unconstitutional way, stopped Congress leader Priyanka Gandhi from trying to visit the village.

It was only after the Opposition parties made the massacre an issue, that Adityanath visited the village and offered some compensation to the victims’ families. But he also used the occasion to try and falsely pin all blame on the Congress and other Opposition parties for the land grab leading to the massacre.

There is evidence that in January 2019 itself, the adivasi MLA from Duddhi in Sonbhadra had written a letter to the Chief Minister himself, alerting him to attempts by land mafia to grab adivasi land in Umbha and attaching a petition by Umbha’s villagers appealing for justice and protection. In addition, 22 villagers of Umbha had written to the then UP BJP President Mahendra Nath Pandey, who is now Union Minister for Skill Development and Entrepreneurship, appealing for his intervention to “protect their lives” from the land mafia. The Chief Minister and the BJP President ignored these cries for help, while the local police continued to harass the Umbha villagers, allowing the Yagya Dutt and his men to file FIRs against the villagers for cultivating their own lands. Had the CM and the ruling BJP regime acted in January, the massacre in July could have been prevented.

Survivors of the massacre have also said that local police officers had asked them to “compromise” on their claims to the land being grabbed, warning them that if they failed to compromise, they should not blame the administration “if something happens.” This clearly indicates that the police knew of the impending attack. This is criminal complicity of the police in a massacre.

The land dispute in Sonbhadra goes back several decades. In 1955, land that belonged to the Gram Sabha and was tilled by the Gond villagers, was illegally handed over to a private “cooperative society”. This society eventually sold a large portion of this illegally acquired land to another private individual, who in turn sold it to Yagya Dutta Bhurtiya, the main accused in the massacre. In 2017 Bhurtuya applied for the land to be mutated in his name, and since then the conflict intensified. In January 2018, the mutation of the land in Dutta’s name was completed. The villagers petitioned in the civil court against the mutation. On July 6, 2019, just a couple of weeks before the massacre, the district administration had rejected an appeal by the Gond villagers against the mutation.

CM Adityanath is trying to cover up his own, and his police and administration’s direct complicity in the land grab and massacre by blaming the whole affair on the Congress which was in power in UP from 1955 to 1989! No doubt, the land grab had already begun in those decades. But the current Government cannot deny the fact that its own administration mutated the land in Dutta’s name and rejected the pleas against the mutation; that the massacre took place with the knowledge and complicity of its own police; and above all the fact the Chief Minister himself had ignored a direct appeal to him by the Gond adivasis for justice.

Adityanath and the BJP have the blood of the Sonbhadra adivasis on their hands. The Adityanath Government of UP is busy promoting communal hatred, lynchings and extra-judicial killings, while emboldening feudal anti-Dalit and anti-adivasi forces in the state. The UP Government, police and administration, starting with the CM and down to the DM and SP, must be held responsible and face punishment for the Sonbhadra massacre, which is one of the worst massacres of adivasis in UP’s history.