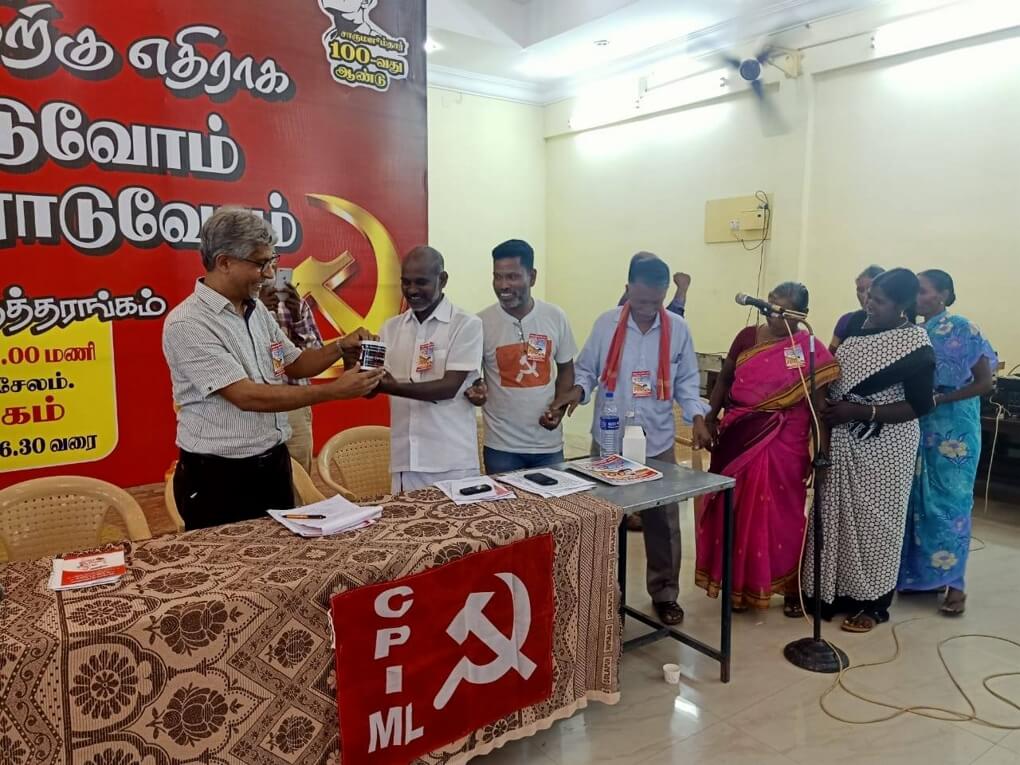 THE CPIML state committee of Tamil Nadu organised a state level convention on the theme ‘Unite and Resist' at Salem on 21st July, to mark the 50th anniversary year of the party’s foundation and the birth centenary year of the founding GS Comrade Charu Mazumdar. Central Committee Member Comrade Abhijit Mazumdar was the chief guest. Altogether 270 cadres and activists took part in the event representing 21 districts and various mass organisations.

The party flag was hoisted by Com Mohanasundaram, party district secretary of Salem, in front of the Hall which was named after the late Comrade DP Bakshi. A seven member presidium proposed by the state secretary N. K. Natarajan took over. Two minutes silence was observed after Comrade Chandramohan read out the condolence resolution in respect of martyrs and departed leaders of our party and of Left parties, killed and died in the anti-corporate, anti feudal struggles, police, military crack-down and those who were killed by the communal hate and frenzy, those who lost their lives in various natural calamities. Hearing the sad news of Com A K Roys’ demise the convention stood in silence for two minutes in respect to the departed legendary leader.

CCM Comrade Abhijit Mazumdar inaugurated the cadre convention. “Recalling the visit of Comrade Charu Mazumdar to this Salem town in his endeavour to build the CPIML gives immense pleasure and strength to me”, he said. Pointing out that in the recent parliamentary elections Tamil Nadu was one state where BJP and Modi been rejected emphatically, he said that this is the victory of people’s struggles. He saluted the fighting spirit of the people of Tamil Nadu. He called upon the party leadership rank and files to build a vibrant, strong party to take on fascist onslaught and to save our beloved motherland. He also called upon the party to make a grand success the ‘Unite and Resist’ mass convention and two days all-India cadres’ work shop to be held at Kolkata. He also reminded the Party’ 10th Congress call building People’s India. At a time we face the no one enemy of the people, democracy and constitution we have to remember Ambedkar’ words of ‘Educate, Organise and Agitate’. Educating the people at grass root level, to organise them in powerful organisations and to agitate against the fascist danger, he appealed. Comrade Desigan, SCM translated his English speech into Tamil.

The CC letter to the party members was read out by Comrade Asaithambi. It was distributed to all the participants in the convention. Then district secretaries and district in-charges addressed the Convention.

In his address, CCM Comrade Balasundaram stressed the importance of expanding and consolidating the Party at every level starting from district party organization down to the branch level. Building vibrant mass organisation and building mass struggles of our own and forging our ties with all the fighting forces of various shades of opinion should be our motto in resisting fascism, he said.  The National call, ‘Unite and Resist’ must be translated into powerful action of rural poor and other sections even at Tola level, he added. Sharing the results of booth level investigation in the Tiruchirapalli constituency, he said that we will get better electoral results where we are able to create panchayat and village-level structures which in turn are able to unleash mass initiatives.

State secretary N K Natarajan said that the Cadre Convention is one of the biggest to be held in the state. He said that the spirit of people’s movements in the state was reflected in the results of the recently held parliamentary polls in TN, and that spirit must be harnessed to defeat the fascist forces.

Following the cadre convention an open session was held in which the fighters and leaders of the struggle against the Green Corridor (8 lane Expressway from Chennai to Salem) were felicitated. Comrade Abhijit presented them a shawl, a picture of Charu Mazumdar and a Tamil book on Charu Mazumdar. They were introduced by Comrade Chandramohan. Accepting the felicitation on behalf of protesters (more than 25 joined the event) Sivakami addressed the session. In turn, the protesters felicitated Comrade Abhijit. The Vizhupuram district committee of the party also presented a memento to Comrade Abhijit.

The Convention ended with revolutionary slogans.