Jhunjhunu: Agrarian Electricity Bills Will Be Boycotted If Subsidy Is Withdrawn 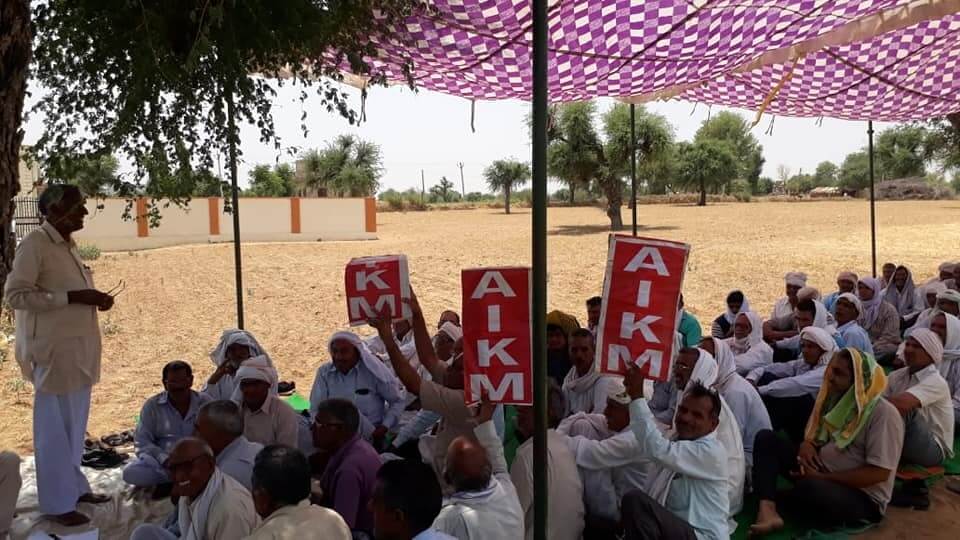 A protest meeting was organised on 3 June 2019 by the All India Kisan Mahasabha (AIKM) in front of the Jhunjhunu Electricity Supply Corporation office in Chanana. The meeting, presided over by Dharampal Dadarwal, demanded that the subsidy in agrarian electricity bills should be retained directly in the electricity bills instead of being sent into the bank accounts of the subscribers, and also to demand that the rampant corruption and irregularities in the bills should be ended.

Addressing the meeting, Kisan Mahasabha State convener Comrade Phoolchand Dhewa said that instead of waiving farmers’ loans up to Rs 2 lakhs as per their electoral promise, the Gehlot government is trying to deprive the farmers of electricity subsidy by implementing the scheme to send these subsidies into the bank accounts, because most farmers’ electricity connection is owned collectively and they will be deprived of this scheme due to internal disputes. AIKM National Secretary Comrade Ramchandra Kulhari said that if the subsidies are paid into the bank accounts, internal disputes will be created among the farmers and also some will get the subsidies in the bank accounts while others will not get them, as has happened in the case of the gas subsidy, and farmers in the State will not tolerate this under any circumstances. The protest meeting was also addressed by Kisan Mahasabha District Vice President Comrade Indraj Singh Charawas, Amar Singh Chahar, Rohtas Kajala, Subedar Shishram Loyal, Karan Singh Charan Singh Nagar, Subhash Khakhil, Mahendra Singh Bhagasara, Mahendra Singh Jhajhariya Solana, Birbal Singh, Laxman Singh Bhukana, Mahavir Singh, Ravindra Payal Manota Jatan, Hoshiyar Singh Chahar, Ramprasad, Sahiram Boran, Phool Singh Khakhil, Jai Narayan and others.

A 15 point memorandum addressed to the Chairman and Managing Director of the Rajasthan Electricity Supply Corporation was submitted to the Assistant Engineer Dharampal who was called to the protest venue to receive the memorandum. The Assistant Engineer gave an assurance that the regional demands would be resolved and the Corporation and State level demands would be sent to the Chairman and Managing Director.

It was decided at the farmers’ protest meeting that if the subsidy given by the State government did not come directly in the electricity bills, the bills would be boycotted. An ultimatum of 20 June 2019 has been given. If the demand is not met, an indefinite dharna will be organised in front of the Assistant Engineer’s office.