Encephalitis Epidemic in Bihar: Bihar and Central Governments Have Blood On Their Hands 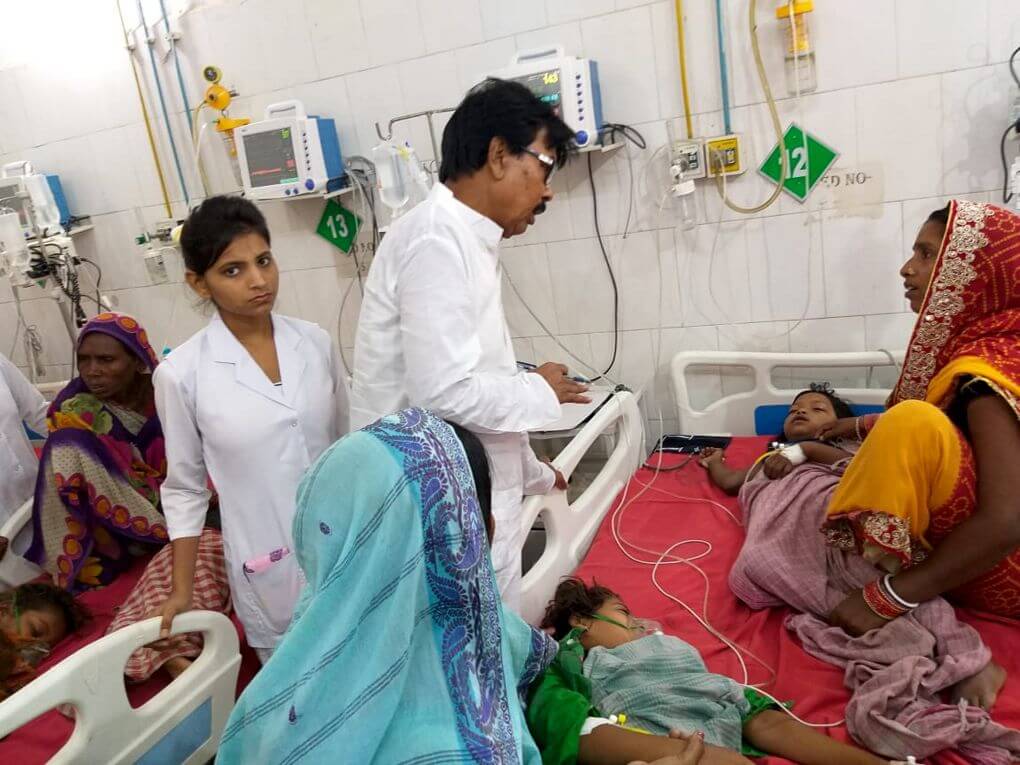 THE Bihar and Central governments are guilty of criminal negligence in the prevention and treatment of Japanese encephalitis in Bihar. 125 children have died so far in Muzaffarpur and neighbouring districts of Bihar due to the Acute Encephalitis Syndrome (AES or ‘chamki fever’ as it is commonly called in Bihar).

This disease strikes almost every summer since 1995 – affecting mostly the children of litchi harvesting workers and other poor labourers. Litchis are plucked early in the morning; and can contain toxins that can dangerously lower blood sugar. Children of the litchi harvesters, who eat a large amount of fallen litchis on an empty stomach to stave off hunger become especially vulnerable to AES, especially when they are already suffering chronic malnutrition, and fail to eat a hearty meal later in the day. Simple preventable measures include washing the litchis before eating, and ensuring that the children are made to eat a full meal or even sugar mixed in water. And of course, experienced medical care and timely treatment can save lives once a child is affected. In spite of being aware that this killer disease (which is preventable and treatable) strikes every season, the Governments of Bihar and the Centre have made no provision whatsoever to prevent epidemics and ensure the availability of timely and adequate medical care. The question arises – would Governments display such callous neglect if it were the children of the dominant classes and castes, instead of the children of daily wage agricultural labourers from oppressed castes, who were fatally struck down every year?

The Government has taken no measures to spread awareness about the simple measures that can protect a child from the disease. Litchi harvesting happens in summer, when schools are shut and so the mid-day meals are not available. The anganwadi system is also strained because of shortage of funds, ill-paid workers, and inadequate anganwadi centres, due to which it is unable to correct the chronic malnutrition and hunger that children suffer. Once the disease strikes, it quickly assumes epidemic proportions because there is no plan in place to keep it from spreading. And the affected kids keep dying in large numbers because of the dire shortage of hospitals at the village, Block and Sub-divisional level and the dismal condition of ICU and Emergency services even in District level hospitals. When a child is gripped by the encephalitis fever in a village, their condition deteriorates so much by the time they reach the hospital in the nearest city that it becomes impossible to save their lives.

Meanwhile the Health Minister of Bihar, the BJP’s Mangal Pandey, displayed shameless callousness at a press conference on the epidemic, asking about the cricket scores. JD-U MP Dinesh Chandra Yadav defended Mangal Pandey by claiming that his concern with the cricket score in the India-Pakistan match proved his “nationalism”. The JDU MP also made light of the epidemic, saying “it happens every year, once the rains start, it will stop.” So in the BJP’s and JDU’s eyes, a preventable epidemic that kills poor children every year is not a “nationalist” concern but a cricket match is!

In the absence of any Government-led efforts to spread awareness, it was left to the National Forum for People’s Rights (NFPR) to organize awareness programmes about preventing the tackling encephalitis in Muzaffarpur. Pamphlets detailing ways of preventing the disease were distributed among the people. As part of this campaign, a rally and meeting were held at the Station Chowk, Muzaffarpur, during which the speakers, including CPIML activists, spoke in detail about the disease and its prevention.

A CPI(ML) team led by MLA Mahboob Alam visited Muzaffarpur, met children suffering encephalitis, and their parents, at the Sri Krishna Memorial College and Hospital at Muzaffarpur and took stock of the situation. The team comprised Mahboob Alam, District Secretary Krishna Mohan, AIARLA leader Shatrughan Sahani, and RYA State Secretary Sudhir Kumar. They noted the acute shortage of medical staff and infrastructure to cope with the epidemic. The party demanded that the Nitish Kumar Government sack Mangal Pandey, deal with this killer epidemic on war footing, recognizing it as a public health emergency. The party demanded urgent measures to prevent the further spread of the epidemic, deployment additional doctors and health workers to save the children of Bihar, and ICU services in District hospitals and Emergency services in Block level hospitals.

The encephalitis epidemics in Gorakhpur (UP) and Muzaffarpur (Bihar) also underline how the Ayushman Bharat medical insurance scheme offered by the Modi Government is useless in tackling what ails healthcare in India. In 2005, Dr Rama Baru of the Centre for Social Medicine and Community Health, JNU spoke to Liberation about the Japanese encephalitis epidemic in UP. Nearly 2 decades later, nothing has changed, because no lessons have been learned. Dr Baru had stressed that the issue could not merely be to provide individual citizens access to hospitals. To predict and therefore prevent the outbreak and spread of communicable diseases and epidemics like encephalitis, malaria, gastroenteritis, etc, a robust public health infrastructure for surveillance and monitoring of diseases. Without such public health infrastructure, it is impossible to interrupt the cycle of transmission of communicable diseases. In Kerala, where the public health infrastructure is relatively more robust compared to other states, we saw how the Nipa virus epidemic could be contained. Privatisation of healthcare across India, and the resulting weakening of public health infrastructure has inevitably weakened the ability to predict and prevent communicable diseases. Further, Dr Baru made the point that epidemics always affect the weakest sections of society worst – the tribals, the Dalits, the landless workers, who are vulnerable because they suffer chronic hunger, malnutrition, and joblessness. To understand epidemics, we must put hunger, joblessness and deprivation back in the picture.

Ayushman Bharat - the Modi Government’s answer to India’s healthcare crisis – is a medical insurance scheme that will siphon off public funds towards private healthcare providers. It will only further promote the dismantling of India’s public health system with private healthcare providers. It will only loot the poor through premiums they can ill afford, while failing to ensure timely and effective treatment to patients locally. And of course, it is no answer to chronic hunger and the resulting diseases and epidemics. What we need instead is a stronger public health system providing free and excellent healthcare for all, ensuring monitoring and prevention of epidemics, and ending chronic hunger. If we do not demand and achieve this, the killer epidemics we have seen over and over in India's villages and cities will keep being repeated.