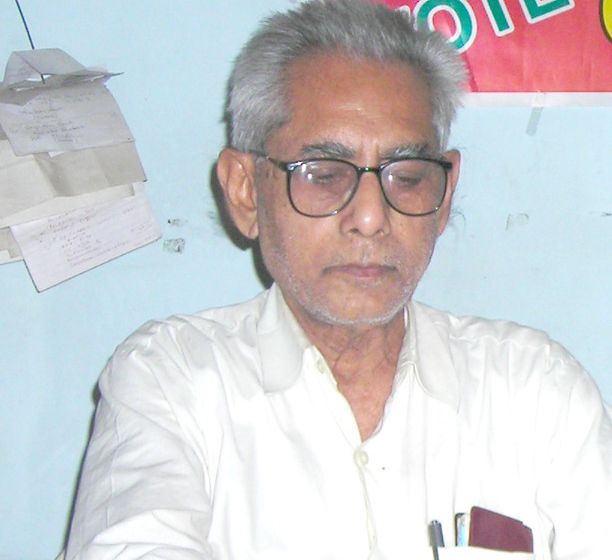 Comrade Subodh Kumar Sinha passed away in the evening of 16 June 2019 in Ram Manohar Lohia Hospital, Delhi. He was 81. His health had been on a decline for some years, but his demise was unexpected and sudden.

Comrade Subodh was born in a Ranchi-based Bengali family, and his name was Debashish Bose. In the tumultuous decade of the 1970s in the wake of the Naxalbari movement, he was employed in the Bihar State Electricity Board as a highly skilled supervisor responsible for laying high-tension electricity transmission lines. It was then that he was drawn to the then underground CPIML party, and became an invaluable sympathiser helping to run shelters for the underground comrades.

He then quit his job to become a full-time activist, and at this time he completely sacrificed not only his job but his previous identity and life. For all purposes he was reborn as ‘Subodh’ - his party name which became the only name by which he was subsequently known.

He became an organiser among the steel workers of Bokaro Steel City (Jharkhand), and also worked among coal and power sector workers. From the Gomia Explosives’ Factory to Bokaro Thermal Plant to Bokaro Steel City, there are a large number of veteran party leaders today who were once inducted into the party by Comrade Subodh. He was also one of the pioneers of CPIML party organisation in Ranchi, and helped build the earliest foundations of the party in Giridih district. He later organised steel workers in Bhilai (Chhattisgarh) as well.

He also worked as party organiser in the Patna-Gaya region during 1975-78, and also helped run the party’s publication department in that difficult period of the Emergency. He was a member of the Central Publications Department headed by Comrade Vinod Mishra. Those were the days when the party had to function underground in the face of extreme state repression, and it was not easy to get party literature printed in the market. He took the initiative to establish the party’s own underground press which used to publish party pamphlets and other literature. The Selected Writings of Comrade Saroj Dutt were also published by that press.

Comrade Subodh joined the party’s Central Office in 1997. For the next two decades, he was the Manager of the party’s weekly ML Update bulletin, and also used to look after the central party office’s reception. Even on 14 June, just a day before his last bout of hospitalisation, he spent the morning sitting at the reception.

Comrade Subodh, affectionately known as “Subodh da” by comrades all over India, endeared himself to everyone with his quiet sense of humour and simple and warm nature. He remained active in party responsibilities till his last breath. All over the country, comrades bid goodbye to this very dear comrade. The Bihar State Committee which was in session, observed a minute's silence to pay homage to him.

Delhi comrades bid farewell to Subodh da at the party’s Central Office on the morning of 17 June, and accompanied him on his final journey to the cremation grounds.

A worker and a communist to the core, Subodh da spent the large part of his 81 years tirelessly working for the people and party. His memory will inspire us all.