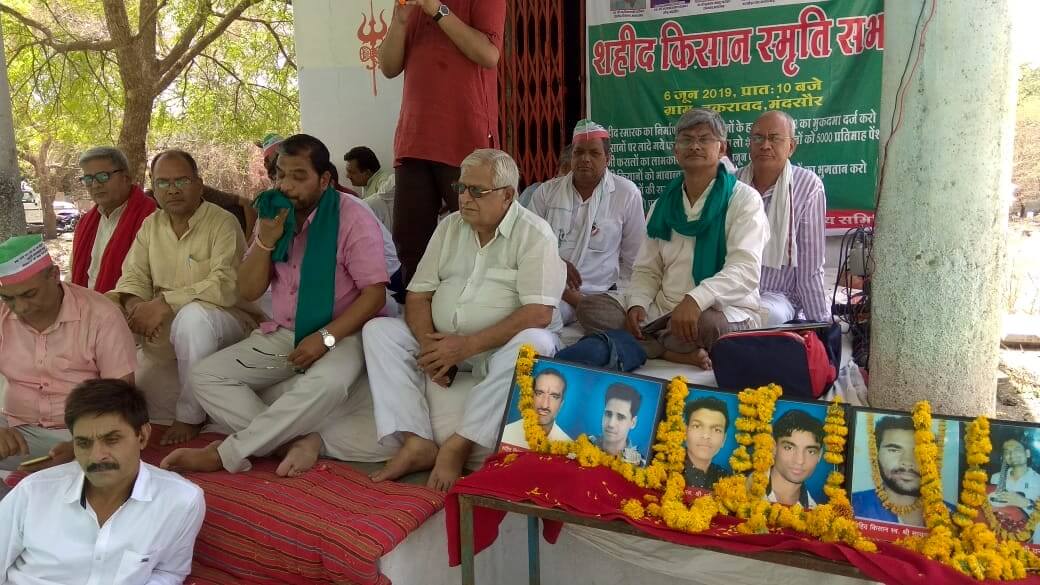 JUNE 6, 2019: Under the banner of All India Kisan Sangharsh Samiti, thousands of farmers in Takrawad village of Mandsaur district, Madhya Pradesh, gathered to pay tribute to the martyred farmers under the chairmanship of Com. Balaram Patidar, who is the uncle of one of the martyred farmers.

On the second anniversary of the killings, about 208 farmers’ organisations from across the country demanded the withdrawal of false cases against farmers and to arrest those accused in the murders. They have also sought the construction of martyrs’ memorials in Mandsaur.

In context of the Madhya Pradesh Chief Minister publishing a tweet in tribute to the martyrs, the convenor of AIKSSC and president of Rashtriya Kisan Mazdoor Sanghatan and former MLA Sardar V. M. Singh said that the organisations have even forced the Prime Minister to speak on farmers’ issues. “The Chief Minister of the State has taken to Twitter to pay homage to the martyrs, which is in no way effective or helpful. We have formed the peasant’s unified organisation to which the government have to surrender and lend an ear to all our demands that are put forth,” he said.

AIKSSC Executive President and former MLA Dr. Sunilam said that the Congress Government in Madhya Pradesh is counting its last breath. “The Congress Government should immediately take to fulfilling the farmer's demands who have a considerable role to play in the formation of their government. Rather than publishing a tweet, the Chief Minister should instead visit Mandsaur and pay homage to the martyrs, and accede to our demands,” he said.

Former MP and farmers’ leader from Maharashtra, Raju Shetty said that assurances to farmers’ demand is not enough anymore. “If the Swabhimani Shantakari Sanghatan in Maharashtra can force the government to revise the prices of sugarcane and milk, it surely can do justice to the farmers of Madhya Pradesh,” he said and added that if the demands of the farmers are not met, then a protest would be organised outside the residents of the Chief Minister.

The National General Secretary of All India Kisan Mahasabha, Com. Rajaram said that the farmers of Mandsaur have brought together farmers from across the country, who have shaken the Modi government. “Since the government is not paying heed to our demands, our struggle will continue,” he said.

The National Convener of National Alliance of People’s Movements, Madhuresh said, “Our struggle is against atrocities, exploitation and injustice, whether it is in Narmada, Mandsaur or Tuticorin. Our aim is to change the present system”.

As the sacrifice of the martyrs is etched in the history of the farmers’ movement in India, all those who had gathered on the occasion paid homage to the memorial statues of the martyrs in Budha Gaon.