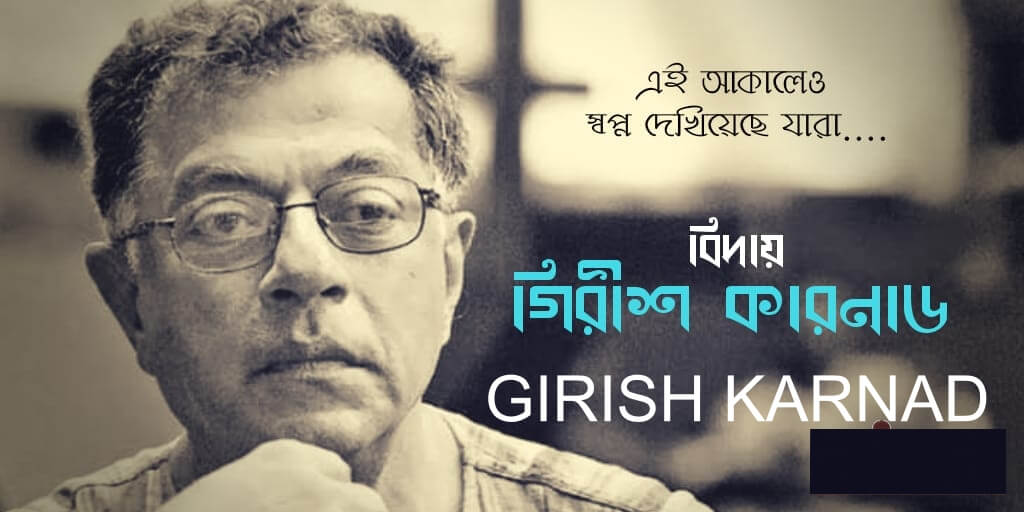 GIRISH KARNAD, Kannada playwright, actor, director, public intellectual, and anti-communal campaigner, passed away in Bengaluru on June 10, 2019 at the age of 81.

Karnad was a pioneering modern playwright in Kannada in the 1960s - an legacy he shared with the Marathi playwright Vijay Tendulkar, Bengali playwright Badal Sircar, and Hindi playwright Mohan Rakesh.

He is remembered for his modern use of themes from Indian mythology and history in plays like Yayati, Tughlaq, Hayavadana, and Nagamandala. He directed films in Kannada and Hindi, including the Kannada films Samskara (1970), Tabbaliyu Neenade Magane (1977) and Ondanondu Kaaladalli (1978) and the Hindi film Utsav (1984), an adaptation of the 4th-century Sanskrit play Mrichchakatika. He acted in Kannada films, as well as in Hindi films and the television serial Malgudi days.

He was awarded the 1998 Jnanpith Award, as well as a Padma Shri and a Padma Bhushan, and the Sahitya Akademi award, and the Kalidas Sammanan. He had served as director of the Film and Television Institute of India, chairperson of the Sangeet Natak Akademi, and of the National Academy of the Performing Arts.

His legacy as an artist is matched by his legacy as a citizen who, till his last breath, stood up to be counted and heard against communal fascism. He had accompanied Gauri Lankesh and other Karnataka intellectuals in a visit to the Babu Budanagiri shrine in 2003, when the Bajrang Dal was out to destroy it. In his last years, though he was ailing, he joined the protests on Bengaluru streets against Gauri Lankesh’s assassination, and against lynchings of Muslims. When the BJP Government and the RSS were branding dissenters as ‘Urban Naxals’ as a pretext to arrest them, Karnad attended a memorial for Gauri Lankesh in Bengaluru, with a nose tube connected to an oxygen tank, wearing a placard that defiantly declared “Me Too Urban Naxal.”

As people mourned his death across the world, Hindutva majoritarian bigots celebrated his death as they had done Gauri Lankesh’s killing. But Karnad stood tall even in death. Respecting his wishes, his family held a quiet funeral minus any rituals, and politely refused the Karnataka Government’s offer of a funeral with state honours.

You will be missed - and you will continue to inspire us all!