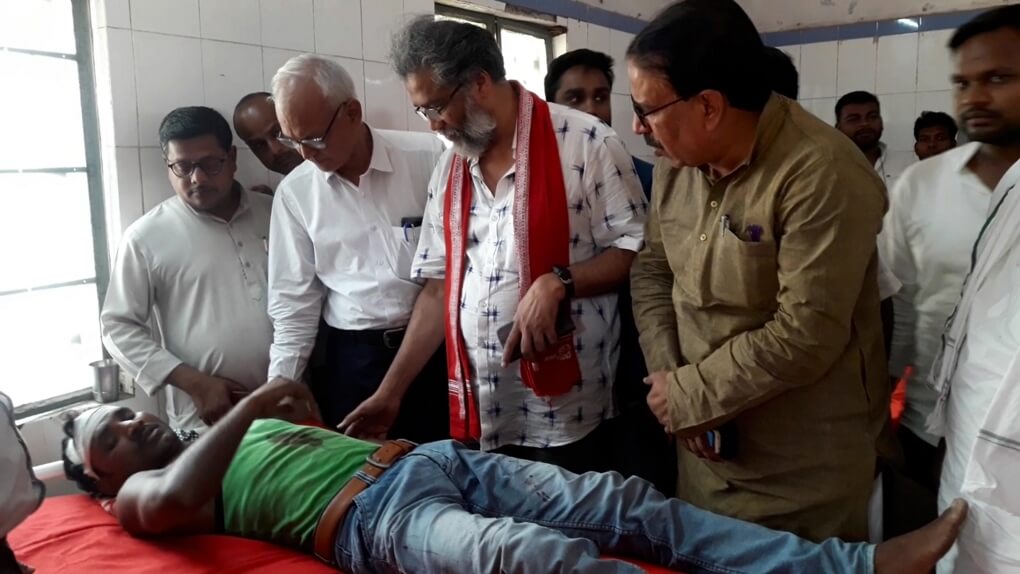 REACTING strongly against the attack on the CPI(ML) campaign vehicle at Nawada Ben in Udwantnagar, Ara Lok Sabha constituency causing knife injuries to four ML activists, CPI(ML) General Secretary Dipankar Bhattacharya said that this shows the BJP’s frustration. He said that the BJP has realized that it is losing the election in Ara in the same way that it is losing across the country. This incident once again reaffirms the fact that the BJP does not believe in democracy. In the face of definite defeat, it is showing its true colours and wants to create an atmosphere of terror by attacking its opponents in various ways. Such incidents are the result of the hate speeches by Prime Minister Modi, BJP President Amit Shah, and BJP candidate from Ara RK Singh.

Dipankar Bhattacharya said that the poor are attacked whenever their political claim becomes stronger. Earlier also in 1989 the poor were attacked and the brutal Danwar-Bihta massacre was perpetrated because they voted for Comrade Rameshwar Prasad. In 2005 also feudal forces fired upon Rameshwar Prasad who barely escaped with his life. But the people are not going to allow themselves to be pushed back in time. The fight for democracy and the struggle of the poor is steadily moving forward. We hope that on 19 May the people of Ara will use the weapon of their vote to avenge this attack.

The incident of the attack took place on the evening of 10 May when CPI(ML) Ara candidate Raju Yadav’s campaign vehicle entered the village of Nawada Ben. At the entrance of the village, feudal forces belonging to the Rajput caste stopped the vehicle and tore the banners on it. They started beating up ML leader Yogendra Ram, asking why they had come to this village to campaign for the CPI(ML). Other ML supporters protested against this. The feudal forces then started attacking the vehicle with knives, lathis, and bricks. They stuck Vishal Paswan thrice with knives and injured him badly. His intestines were injured. Umesh Paswan was injured on the head and had to receive four stitches later in hospital. Yogendra Ram was severely injured in the arm and Akash Kumar’s ear was torn. All the injured were admitted to Ara Sadar Hospital. After first aid, Vishal Paswan was referred to Patna PMCH, where he underwent an operation which lasted four hours.

CPI(ML) Polit Bureau member Ramji Rai, AIPWA General Secretary Meena Tiwari, Party State Committee member Umesh Singh, RYA National General Secretary Neeraj Kumar, Shweta, Saurabh Naruka and other leaders went to Patna PMCH and visited the injured Vishal Paswan. They also met Dr Prasad, in-charge of the unit treating Vishal Paswan. He is currently out of danger and has been transferred to the Rajendra surgical ward. State Secretary Kunal said that this is the third attempt to disturb the CPI(ML) election campaign. Earlier, just outside Ara city on 7 May motorcycle borne goons had torn down the flags put up on a campaign vehicle coming from Jitaura. Also, feudal forces at Rampur Chauram in Jahanabad had prevented CPI(ML) candidate Kunti Devi from campaigning.