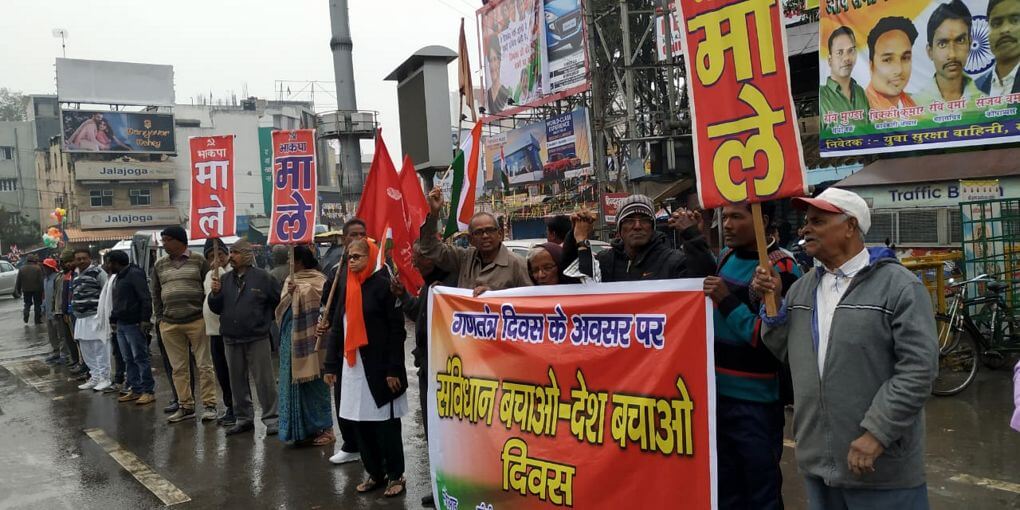 A symposium on the topic ’70 Years of the Republic and the Common Man’ was organized on Republic Day eve on 25 January at Manthan Yuva Sansthan, Ranchi. Speakers participating in the symposium said that ‘Gan’(people) have become isolated from the ‘Gantantra’ (Republic). Burning issues like education, health, unemployment, price rise, migration, displacement, superstition and untouchability remain unresolved. Issues facing women, adivasis, minorities, and dalits have not been addressed.

The speakers said that displacement and migration have become a big issue in Jharkhand. Land is being forcibly grabbed without permission of the Gram Sabha. Earlier, the ruling powers and politics used to run corporate houses; now it is the corporate houses which are dictating to the ruling powers and politics. Today governments and politics are run only with a view to elections. We can see clearly where the political parties which had sworn by democracy and secularism stand today on issues and problems concerning the common man. It is extremely unfortunate that the Constitution and its provisions are being violated and so-called secular parties are becoming prey to the idea that if they speak out for minority rights the majority will become angry, so it is better to keep silent. The speakers stressed that unless economic and social justice is ensured, the ‘Republic’ is meaningless.

Left parties observed Republic Day this year as ‘Save the Constitution-Save the Country Day’. Programs were organized across Jharkhand and it was resolved to strengthen the fight against the attacks on democracy and the Constitution by the ruling classes.

The leaders said that the BJP-RSS are constantly attacking secular values and are bent on giving a communal colour to the Constitution, making Muslims second-class citizens, and imposing Brahminical-feudal-Manuvadi values on society. Democracy is in danger in our country, and we must unite and fight to stave off this danger and defeat the BJP-RSS.