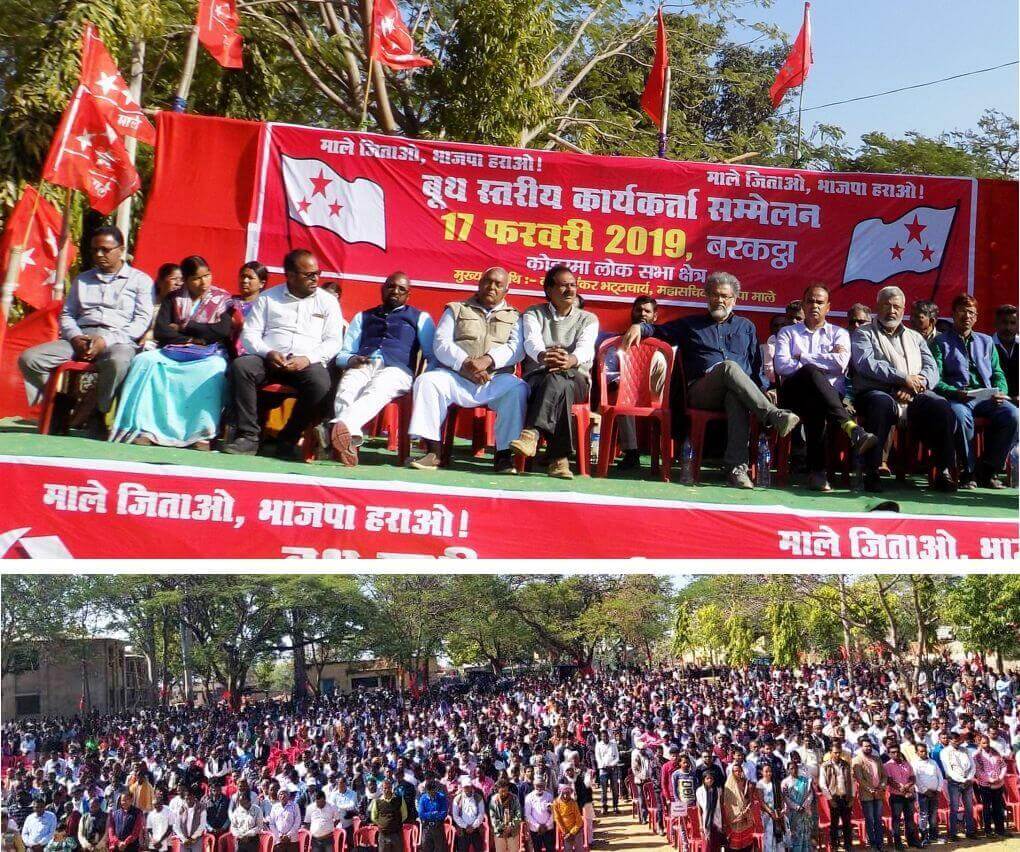 The convention began by observing 2 minutes silence to pay tributes to the 44 CRPF jawans who were killed in Pulwama. The convention was addressed by CPIML General Secretary Dipankar Bhattacharya, who was the main speaker in the convention, state secretary Janardhan Prasad, ex MLA from CPIML Vinod Singh, current CPIML MLA from Rajdhanwar Rajkumar Yadav, state AIPWA secretary Geeta Mandal, AIPF leader Basheer Ahmad and other leaders. Nearly two thousand party workers participated in the convention. Thousands of people were also present around the Barkatta block ground.

Addressing the convention, Dipankar Bhattacharya said that in this hour of grief, our party stands in complete solidarity with the families of the martyred jawans. BJP and its related fronts are trying to create an atmosphere of hatred and war within the country, however war is not a solution to any problem. We do not want to lose more of our soldiers in wars. What we want is that people who are responsible for this terror attack and the sacrifice of our soldiers are given stringent of punishments. He added that this incident has exposed the truth underlying the claims of the government of it being ‘strong’ and having an active ‘intelligence system’. Today the country is standing at a very sensitive juncture. An anti-people fascist force is trying to do politics by shedding crocodile tears on the martyrdom of our soldiers. The Modi government has been trying to consistently attack the democratic and the secular fabric of our country. The people brought them to power to fight the crisis they were facing, however this government has posed itself to be a crisis for the people. Even after 5 years of being in power, the government has no answers to the increasing number of questions of the student-youth, workers and farmers. The promises of more than 2 crore jobs has proved to be a lie. The student-youth, workers and farmers have been on streets in huge numbers for past few months now. Com. Dipankar also termed the promise of 6000 to farmers in the last budget by the Modi government, as an insult to the farmers. The latest figures reveal that the rate of unemployment which was between 2 and 2.5 percent has now risen to 6 percent. Despite this the Prime Minister and the BJP ministers are claiming there is no unemployment even as they continue to the youth to sell pakoras and making punctures. Today the entire country is witnessing a movement of the Rasoiyas and the mid day meal workers demanding dignified wages and the status of a government employee. In Jharkhand the para teachers are fighting for their dignified wages and permanency. However, the BJP is least bothered about these concerns and is instead busy shutting down schools in Jharkhand.

Strongly condemning the attacks on Kashmiris in different parts of the country, post Pulwama, he said that the BJP will have to pay the cost for doing the politics of hatred and division. The mood of the country today is for change and the people want this corrupt, anti-people, fascist Modi government to go. He appealed to the workers to get ready for the Lok Sabha elections preparations. He reminded the workers how Babulal Marandi in the last elections had ran away from Koderma to help the BJP which he continues to do so and fought from two seats in Giridih and lost both.

Former CPIML MLA from Bagodar and CC member of the party, Vinod Singh said that the BJP won the Koderma seat by promising ‘Acche Din’. However, the betrayal of the promises is been happening for the last five years. CPIML MLA Rajkumar Yadav said that the people are aware of the difference between speaking and doing of the current and the former MPs of the region. The fight here is directly between the CPIML and the BJP. This is a fight between rural poor, middle peasantry, middle class versus the alliance between feudal forces, brokers, middlemen and the administration.

State secretary Janardhan Prasad said that CPIML has been struggling for the people of Jharkhand even before the state of Jharkhand came into being and even today CPIML is championing the fight against BJP here. Be it the Babulal Marandi led government or the now Raghuvar Das led government, BJP rule in the state has always spelt oppression and fear in the state. He said that CPIML has always taken forward people’s struggle in the state and this is also the state where Mahendra Singh was martyred. Com. Dipankar also had to go to jail during the movement against killing of 8 tribals in the Tapkara firing. MCC leader Mithilesh Singh said that at one time Koderma used to be an international market for mica, which was destroyed by the BJP.  He also said that the number of jawans who lost their lives between 2014 and 2019 at the border is way more than the number of jawans who lost their lives in the preceding twenty years.

Speaking at the end of convention, Manoj Bhakta, Giridih district secretary stressed on the need to take leads in 1200 booths and the formation of booth level committees for the same. He elaborated the tasks that the party cadres will have to take to ensure this. From March 8 to March 14, a Mahila Jagran Yatra will be organized across Koderma under the banner of AIPWA. The yatra will begin from Koderma and end in Rajdhanwar.