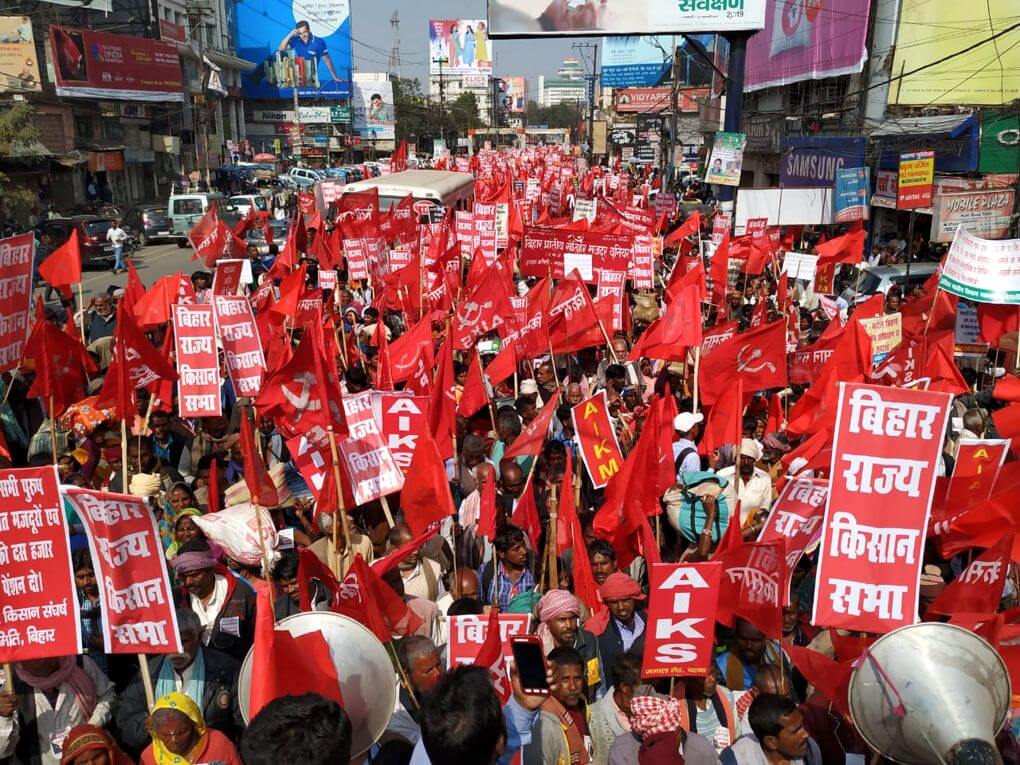 SEVERAL thousands of workers and farmers gathered in Patna on 18 February declaring that neither farmers nor soldiers were safe during Modi’s regime. The march was organized under the banner of the All India Farmers Struggle Coordination Committee and nearly 40 workers and farmers organizations of the state participated in the historic march.

The area between the Gandhi Maidan and the Dakbunglow Chowraha reverberated with slogans as farmers and workers marched to the Vidhan Sabha demanding - waiving off of all kinds of farmers loans, insurance of the crops, compulsory purchase of the crops, a stop on displacement of Dalits and poor without any alternative arrangement, implementation of the new sharecropping law, preparing a new law for housing, starting the sugar-paper-jute-cotton and other mills, guarantee of land and housing, guaranteeing minimum wages for MNREGA and all scheme workers, and minimum 3000 pension for old age citizens and other demands listed in the 25 point demand. Carrying placards and raising slogans, the workers and farmers marched determinedly and spiritedly. The march was led by the Bihar-Jharkhand incharge of the All India Farmers Struggle Coordination Committee, Rajaram Singh, peasant leader N.K. Shukla, AIARLA National General Secretary Dhirendra Jha, Kisan Sabha- Kedar Bhawan leader Ashok Singh, Kisan Sabha-Jamal Road leader Vinod Singh, CPIML MLAs comrades Sudama Prasad and Satyadeo Ram and other leaders. 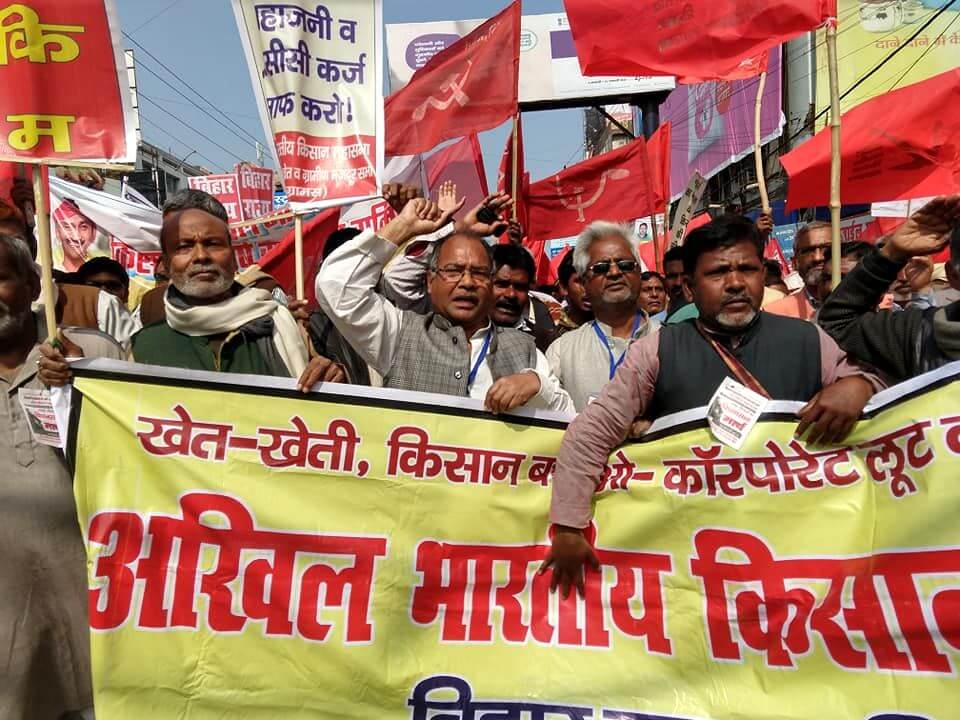 Addressing the sea of workers and farmers at the Dakbunglow Chowraha, Rajaram Singh said that neither farmers nor soldiers were safe in the rule of pro-Ambani-Adani Modi government. We must ensure their defeat in 2019. Only then can the country be safe, there can be control on terrorist activities and the farmers will be able to get loan waivers, crop insurance, profitable price and guarantee of compulsory purchase of crop. The condition of the farmers has become extremely bad under the Nitish government. The agriculture based industries have closed and the government has proved itself to be inefficient in purchase of crops. The historic march of the workers and farmers is a declaration that they will defeat Modi and Nitish in the coming elections.
AIKS leader Kishor Shukla said that the farmer struggles in Maharasthra, Rajasthan, Madhya Pradesh, Chhattisgarh and other states have been attacked for protesting the Modi government’s lies and anti-farmer policies. Scores of soldiers are being killed and far from taking responsibility for it, the Modi government is instead busy spreading frenzy and disrupting the country’s internal unity.

National General Secretary of AIARLA, Dhirendra Jha also reiterated that neither the country nor the soldiers were safe under the Modi government. They are trying to face the coming elections by creating frenzy. The PM insulted the jawans by choosing to inaugurate projects and indulge in election campaigns in the midst of national mourning, even as BJP President Amit Shah invokes the jawans’ deaths to ask for votes for the BJP. He added that Nitish government in the state has displaced or issues displacement notice to 10 lakh Dalits and poor in the state. The Dalits, tribals, workers and the poor of Bihar and of the entire country are asking to make land and housing a fundamental right. The government that tries to displace the Dalits and poor and not provide an alternative housing for them, will be displaced by the people. 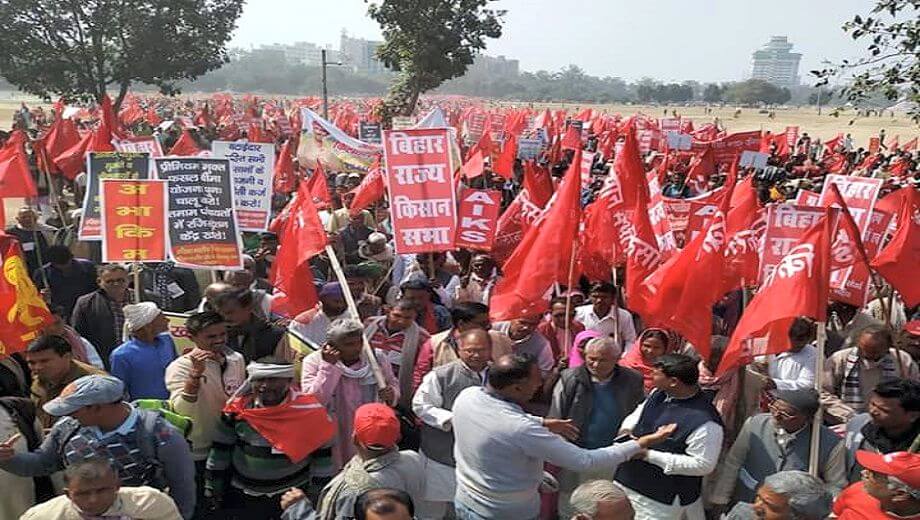 The state secretary of AIKS, Ashok Kumar Singh called the Bihar government anti-farmer as it had replaced the earlier Kisan Bima Yojana (Crop Insurance Scheme) and refused to the purchase the crop at the fixed rate. The government is also silent on the issue of loan waiver to farmers and sharecroppers. In 2014 Narendra Modi had declared the fertilizer industry in Beguserai would be revived but he betrayed that promise and now he is back again with empty promises for 2019. The united farmers’ movement will give him a befitting response.
All the three MLAs of the CPIML demanded the resignation of the Chief Minister in the assembly and participated the unity rally of the workers and the farmers. Addressing the meeting, MLA Satyadeo Ram said that for GST, there are late night meetings, but on the issue of worsening conditions of farmers and workers, there are no discussions in the house. The Nitish government is celebrating millionaires and billionaires and displacing the dalits and poor.

As the march proceeded from Gandhi Maidan to the Vidhan Sabha, there were attempts to stop it but the protesters continued to march. Dhirendra Jha dared the administration to arrest the protesters. He said that if they were not allowed to proceed, they will break the barricades and march ahead. The administration announced arrests on a loud speaker at the Dakbunglow Chowraha. However, the protesters refused to be intimidated and decided to block the road and hold the public meeting there itself.