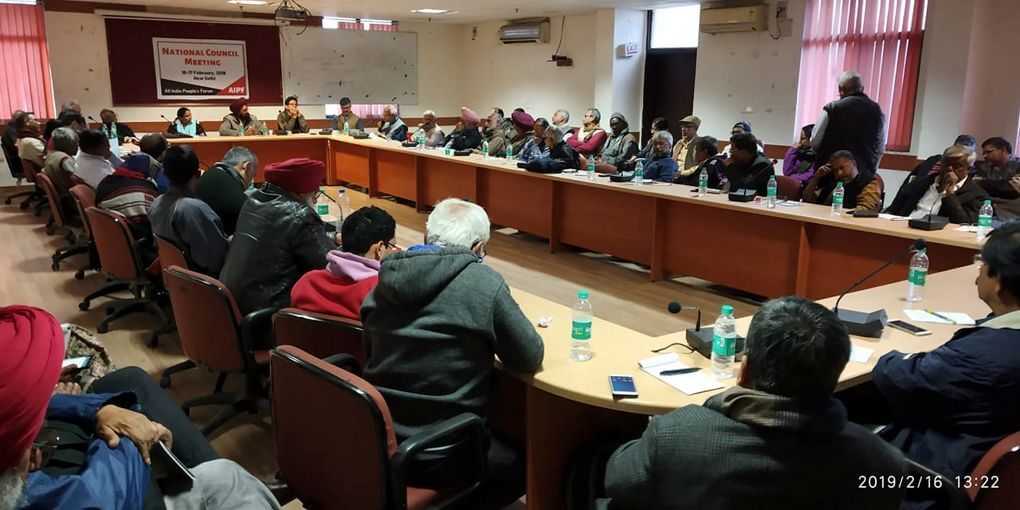 THE AIPF Campaign Committee met in Delhi on 16 February and chalked out a plan for a grassroots campaign highlighting a People’s Charter for 2019 Lok Sabha elections. Campaign Committee members from all over the country participated in the meeting. The AIPF decided to postpone the release of People’s Charter, scheduled for 17 February, out of respect for the jawans killed in the heinous Pulwama attack. The AIPF issued a statement appealing to people to maintain calm and reject rumours and provocations to violence, and also raised questions about the accountability of the Modi Government for failing to prevent the attack, for its disastrous Kashmir policy and the role of the NSA Ajit Doval, and for failing even to appeal for a stop to communal attacks by Sangh outfits on Kashmiris and Muslim minorities in the wake of the Pulwama attack.
AIPF Formation in Uttar Pradesh, Haryana and Rajasthan

Uttar Pradesh: The formation of AIPF in UP took place in a meeting organized in the Rihai Manch office in Lucknow on 11 February 2019. CPIML central committee member Mohammed Salim, Rihai Manch leaders Rajeev Yadav, Gopal Krishna Verma, Shukurullah Ahmad, Shekhar Robin, Bankelal, Shahrukh, Virendra Gupta and several other people associated with social and political organizations participated in the meeting. Com. Salim presented the AIPF People’s Charter and invited suggestions on the same. During the discussion session, members shared concerns and suggestions regarding- reservation in judiciary, enacting an atrocities act to prevent oppression of minorities, the attempts to destroy the character of Jamia University and AMU University, reforms in police and judicial systems, fellowships for law students, rejection of 10% of reservation general category and taking back the 13 point roster. Participants also shared concerns over increasing displacement of the poor in the name of building roads, increasing incidents of lynching, attacks on dalits, media censorship, attempts to end reservations, the attacks on universities in the name of nationalism, the fund cut in education and the failure and refusal of the government to deal with corruption. They stressed the need to enact a communal violence bill.  Senior advocate Mohammed Shoaib was elected as the convener of the AIPF – UP unit. It was decided that a memorandum would be sent to all the political parties to include the issues of the poor, oppressed, adivasis, students and youth in order to defeat the fascist forces.

In Haryana, a 21 member committee was constituted with Prem Singh Gehlawat as the convenor. In Rajasthan, the meeting took place in the Vinoba Gyaan Mandir, Jaipur. In order to encourage expansion and activities of the AIPF in Rajasthan, a working group was constituted. The working group included Sawai Singh of Samagra Seva Sansthan, Kavita Srivastava from PUCL, Mahendra Neh from Janwaadi Sanskrit Morcha, workers’ leader Hansraj Chowdhary, social activist Rinku Parihar and others. Shankarlal Chowdhary was made the working group convener. The manifesto for the 2019 elections was presented and discussed in the meeting. In the introductory session of the meeting, Om Prasad, an AIPF campaign committee member from Delhi, said that the forum was the united forum for the various left, progressive and people’s organizations to fight against the fascist attacks and strengthen the democracy. In the coming days a people’s charter will be shared with all the political parties and the forum will appeal to people to vote to defeat the fascist forces.