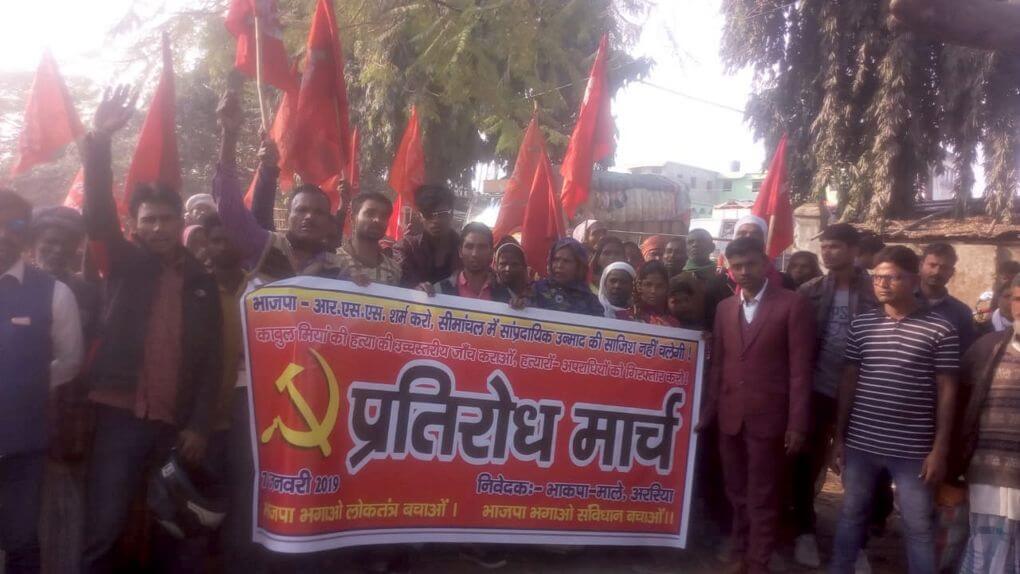 CPI(ML) State Secretary Kunal has told that the enquiry team found this incident to be part of a well-planned conspiracy by the BJP-RSS to spread communal venom in the region. They have been trying for a long time to spread the poison of communal politics in the region in the name of Bangladeshi infiltration, but have not been able to succeed. Ever since Nitish Kumar surrendered for a second time to the BJP, their morale has received a considerable boost across Bihar and especially in this region; and now they are openly conducting incidents of mob lynching. Nitish Kumar’s so-called rule of law is being thrown to the winds and criminals and murderers are at the peak of confidence.

He said that the beating to death of Kabul Miyan, a resident of Dahgaon in Araria, is part of this conspiracy by the BJP. But the people of Bihar have understood the BJP’s evil intentions very well. Our Party demands the immediate arrest of all the conspirators and killers in this incident and a high level enquiry into the entire incident.

The CPI(ML) enquiry team reported that on the night of the killing, Kabul Miyan (resident of Dahgaon in Sikti Block, Araria) had his dinner in his village and then gone to neighbouring Khan Tola at a distance of 1-1.5 km to watch a qawwali programme. In the morning, his dead body was found at Simarbanni, 7 km to the north-east of Khan Tola. There are two wards in Simarbanni; one is a Tola populated by Muslims migrants, and the other is a Tola with Mahto caste population. The Mahto Tola residents are supporters of the BJP-RSS. Kabul Miyan’s dead body was found between these two hamlets.

The CPI(ML) enquiry team met with Muslim Miyan, from whom Kabul Miyan is alleged to have stolen the cow. Muslim Miyan’s house is located in Simarbanni 1 km to the east of the incident site. Muslim Miyan told the team members that at about 1 am in the night he heard the calf crying out loud. When he went to the spot, he found that his cow was not there. A hue and cry was going on in the western Tola at that time, and the people from Mahto Tola were continuously beating up Kabul Miyan. It was being spread around that Kabul Miyan had stolen a cow and was taking it away. But Muslim Miyan gave the contradictory statement that his cow was found not at the site of the incident but in a field next to his house. When the CPI(ML) leaders asked Muslim Miyan to show them the spot in the field, he evaded the question. The enquiry team members had wanted to see the hoof prints of the cow in the field.

At the time when the Mahto Tola people were beating Kabul Miyan, the village chowkidar Pramod Rishidev phoned the police, but the police did not arrive at the incident site. The team learnt that Kabul Miyan was a happy and prosperous person with a criminal record in the past. But the villagers also said that he had given up such activities 15 years ago and was currently on bail in a few cases. He was originally a Bangladeshi migrant and that is why he became easy fodder for the BJP that day. It can be easily understood that the owner of 15 acres of land had no reason to steal a cow.

The enquiry team has expressed doubts over the charge of cow theft and therefore has demanded a high level enquiry into the incident. They suspect that the allegation of cow theft has been used as an excuse and another member of the minority community has been put forward as the ‘victim’ of the cow theft. Clearly, pressure is being put on the minority community with regard to this incident. The BJP-RSS are bent on disturbing the entire region in the name of Bangladeshi infiltrators. Kabul Miyan became easy fodder for this unholy campaign of the BJP-RSS.

A protest march by CPI(ML) was held in Araria on 7 January 2019 against this incident.