Country Comes to Standstill With All India Workers’ Strike

The All India General Strike called by ten central trade unions and supported by many workers’ federations in finance and services sectors brought down economic and social life to a virtual halt in entire country on 8-9 January 2019. This became a complete Bharat Bandh with participation of many democratic organisations including those of students, youth, women and farmers. This strike was a response to Modi government’s continued cronyism to few corrupt corporate houses and intensification of attacks on workers’ rights and livelihoods amidst a situation where economy has worsened to unprecedented scale. There was spontaneous response to the call of the strike from the workers in various states and various sectors of economy - from organized including state and central govt. employees to unorganized. 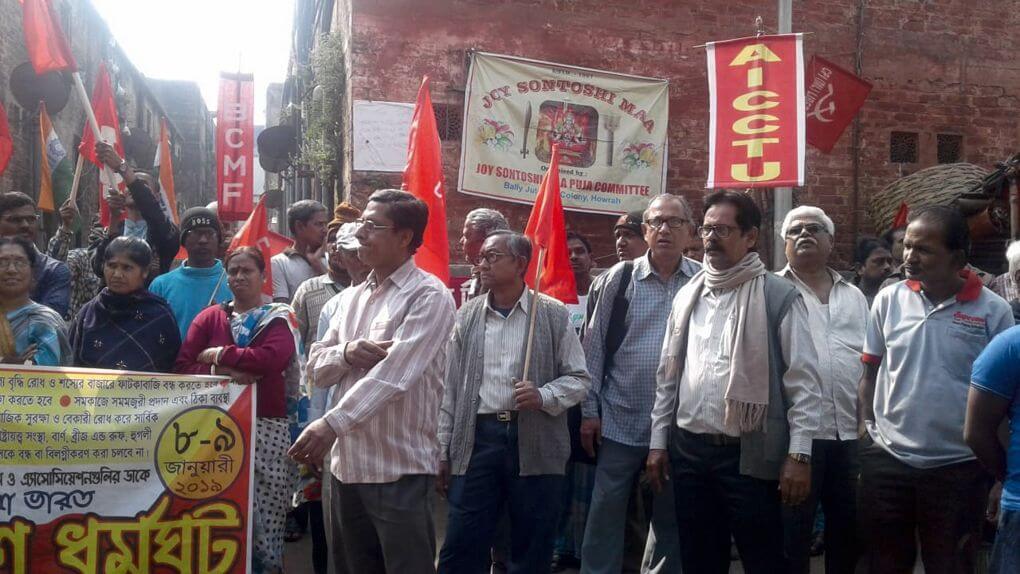 CPI(ML) Central Committee in a statement congratulated the “Indian working class and other sections of the people for the unprecedented support and participation witnessed in the two-day countrywide strike. With millions striking work and hitting the roads, defying the repressive measures of the state, company managements, and goons of ruling parties in several BJP-ruled states and TMC-ruled West Bengal, the strike has turned out to be an emphatic statement of popular rejection of the disastrous Modi regime. The last-ditch attempt of the Modi government to deflect and divert the attention of the people from the key strike demands of universal employment, minimum wages and social security for all by announcing a 10 percent quota for the upper castes only exposes the Modi regime's desperation and dishonesty. The people of India will unitedly fight back for social justice, economic rights and welfare and vote out the Modi government for its brutal war on the people and on the Constitution that unites the country on the basis of democracy and rule of law.” 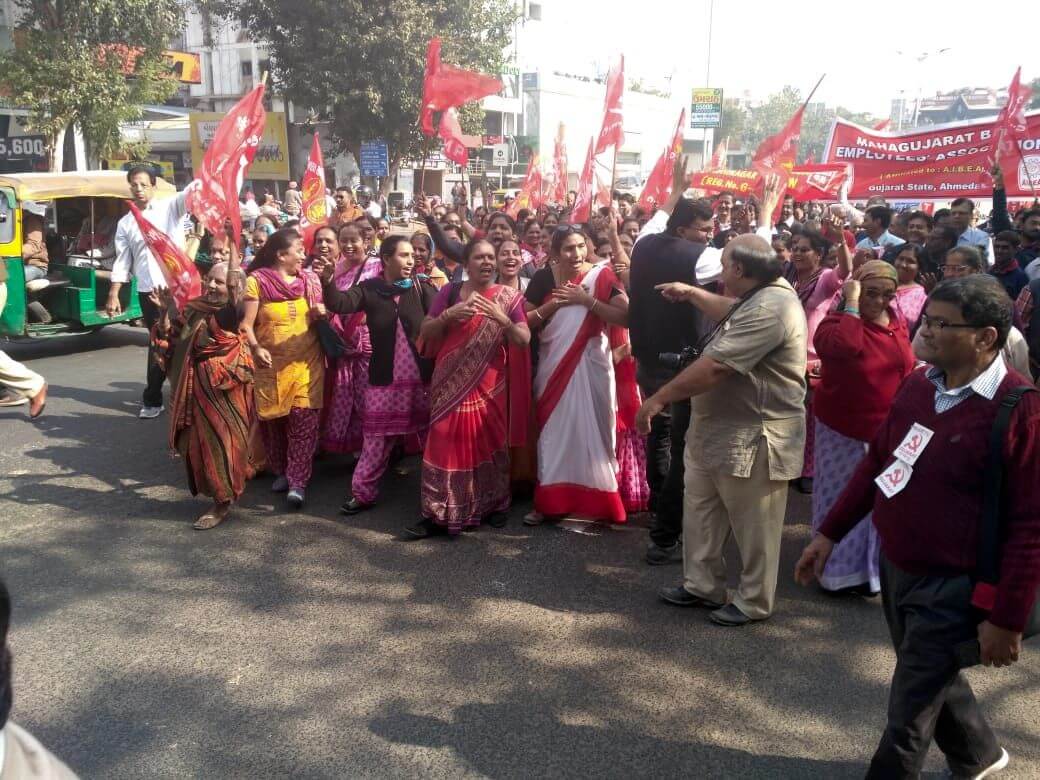 Reports show that some States like Assam, Bihar, Jharkhand, Kerala, Odisha, Puducherry, W. Bengal, Manipur, Meghalaya, and cities like Bangalore and Bhopal had Bandh (shutdown) like situation. Finance Sector, i.e. banking and insurance was closed for business throughout, even in A&N Islands. Electricity generation and distribution, coal extraction and movement had been badly affected. Many state governments have declared holidays for schools in view of the strike. The BEST, Mumbai city road transport service provided by the Municipal Corporation, recorded a 100% strike. The industrial workers and those of unorganized sector – scheme (ASHA, Mid-day Meal, Anganwadi etc.), construction, contract, agricultural, plantation etc. went on strike on a large scale and organized a road-block and stopped trains in many states. 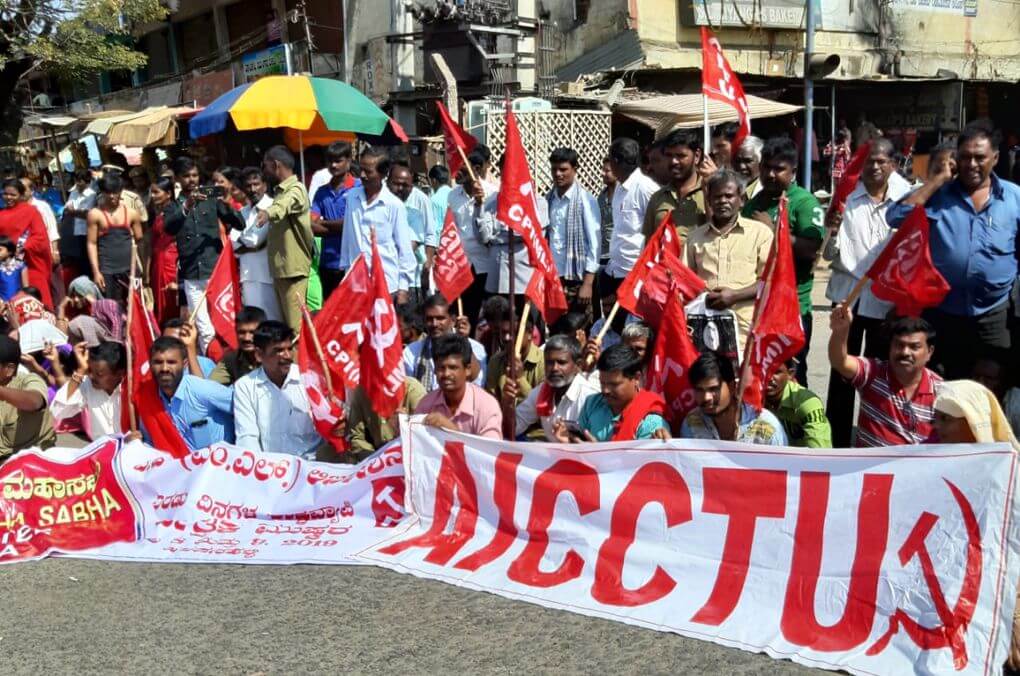 There are reports of arrests of striking workers in Assam and West Bengal, slapping of ESMA and No Work No Pay notices, particularly in BJP-ruled states. AICCTU played a major role in organizing strike in North- 24 Parganas, Hooghly, Kolkata, Siliguri, Nadia, Asansol, Jalpaiguri and Jute and Tea industries in the face of attacks by TMC goons. Many trade union leaders were arrested including AICCTU’s Basudeb Bose, Dibakar Bhattacharya and Babu das. AICCTU strongly condemns this attack on democracy. In Rajasthan, around 1500 workers in the Daikin AC factory gate in Neemrana faced lathicharge, water cannons, tear gas, and air firing by the police, in order to stop the strike and peaceful democratic rally in the Japanese zone. A large number of workers are seriously injured and are hospitalised. In Puducherry, nearly one thousand people were arrested where road blockades were held at a dozen places.

The strike, Chakka Jam, protests and rallies continued on the second day on 9 January 2019. Trade unions jointly organized a massive rally at Parliament Street in national capital on this day.

While industrial areas and financial institution were affected with the strike, this has got active support and solidarity from various organizations of peasants, students, teachers and various sections of society. Teachers of various universities have also struck work in support. In JNU Delhi students have joined the two day strike in solidarity. The World Federation of Trade Unions (WFTU) has also expressed its active solidarity with this strike.

Central Trade Unions, independent Federations and Associations of various sectors have been consistently fighting on a 12-point charter of demands. AICCTU congratulated the workers for the exemplary fighting mood they have shown on the first day of strike. 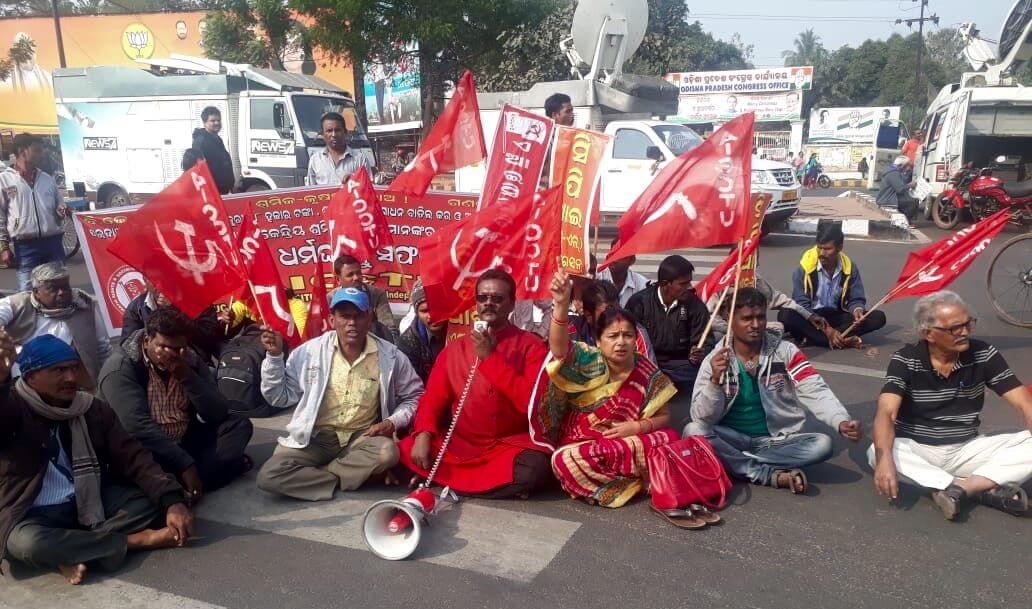