THE resounding success of the countrywide general strike called on 8-9 January 2019 by all the major trade unions and independent federations of the country against the Modi government’s constant attacks on labour laws, with the main demands of ending the contract-honorarium system, equal pay for equal work, and guarantee of respectable wages has shown that the countdown to the end of the Modi government has begun. We give below a brief report of the strike from different parts of the country, where factory workers, government employees, bank and insurance personnel, ASHA, anganwadi, rasoiya, and other unorganized sector workers participated in huge numbers and farmers, students and youth also came out on the streets in their support to express their organized anger. 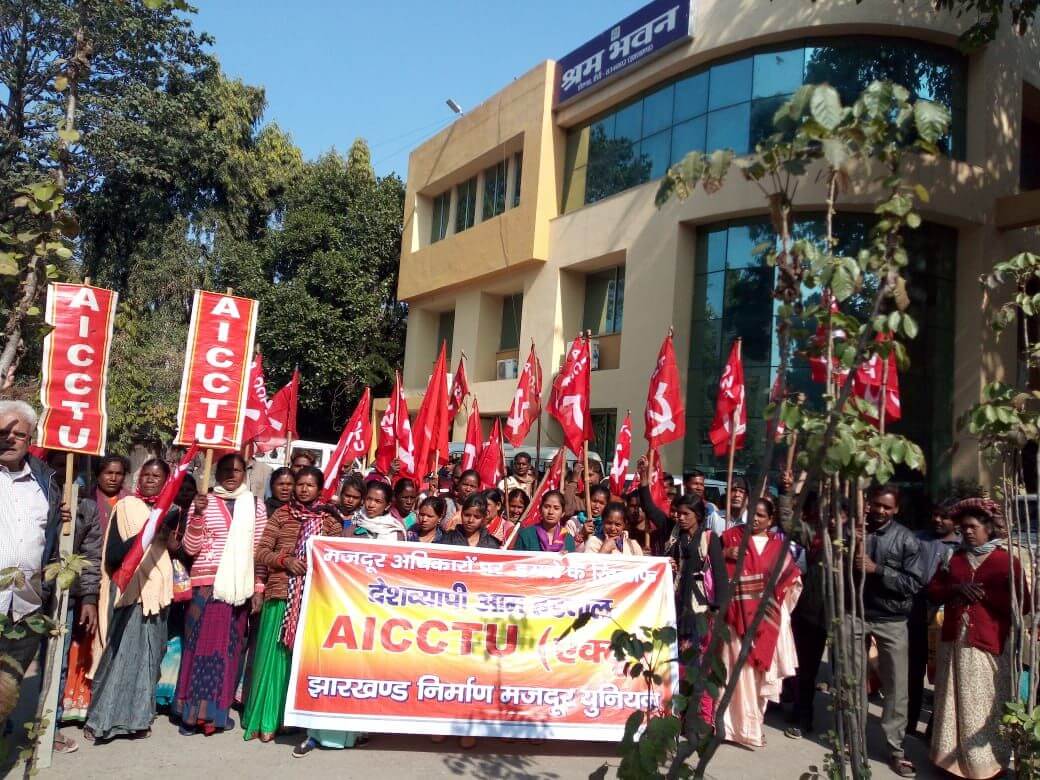 Jharkhand: The entire coal industry including ECL, CCL and BCCL were on complete strike during the 2 day strike on 8-9 January, with production, transport, and dispatch coming to a full halt. Workers came out on the streets in all districts of Jharkhand with active support from CPI(ML), CPM, CPI, MSS, SUCI, Kisan Sabha and all organizations affiliated to CPI(ML). Workers affiliated to the Construction Workers Union struck work and held a protest at Albert Ekka Chowk in Ranchi addressed by AICCTU leaders who warned the state governments to revoke the anti-worker policies without delay. The labour office was gheraoed on 9 January and a 13 point memorandum was submitted to the Labour Commissioner.

In Dhanbad, colliery workers showed an incredible unity and made the strike fully successful at Kumardhubi, Barmudi, Champapur, and Baijna, Mugma area of ECL, Area 10 of Lodna (BCCL), and Jairampur Area office. Tisra Workshop and Jinagora Workshop remained closed and a motorcycle rally led by CMW was organized in these areas. The Jharkhand State Rasoiya and Sanyojika Sangh organized a march at the golf grounds on 9 January in support of the strike.

Bihar: In the State capital Patna, hundreds of workers affiliated to AICCTU including ASHAs, Rasoiyas and other working women reached the Dakbangla Chowk in four different groups marching separately and surrounded it, raising slogans against Narendra Modi. The marches were led by Shashi Yadav, Saroj Chaube, Dhirendra Jha, RN Thakur and Rambali Prasad. About a dozen effigies of Prime Minister Modi were burnt at the protest.

At Phulwarisharif, hundreds of contract workers Sudha Dairy Niji Vahan Chalak Evam Karmachari Sangh, Nalanda Biscuit Company Mazdoor Union and AIIMS organized a march, road block, and meeting. The Bihar Police Class IV Workers Association (Gope group) organized a rally from the Veterinary College to BMP Camp and the airport. At Darbhanga, the Bihar State Primary Teachers Association (Gope group) organized a protest in support of the strike. Anganwadi and other unorganized sector workers held a protest march at Ara and a meeting in front of the Collectorate. The Non-gazetted Workers Association (Gope group) organized a motor cycle rally and closed down all government offices including banks and insurance offices. Ara Municipal Corporation workers held a gate meeting at the Nigam gate, At Jaynagar in Madhubani, the Motor Drivers Union organized a rally and meeting at Ambedkar Memorial. Thousands of construction workers and unorganized sector workers including ASHAs, Rasoiyas, Sevika-Sahayikas and scheme workers joined the strike in Bhagalpur, blocking NH 80 for hours. This was followed by a rally and a meeting at the Collectorate addressed by AICCTU National Vice President SK Sharma, State and District Secretary Mukesh Mukt, and leaders from AITUC, CITU and other organizations. 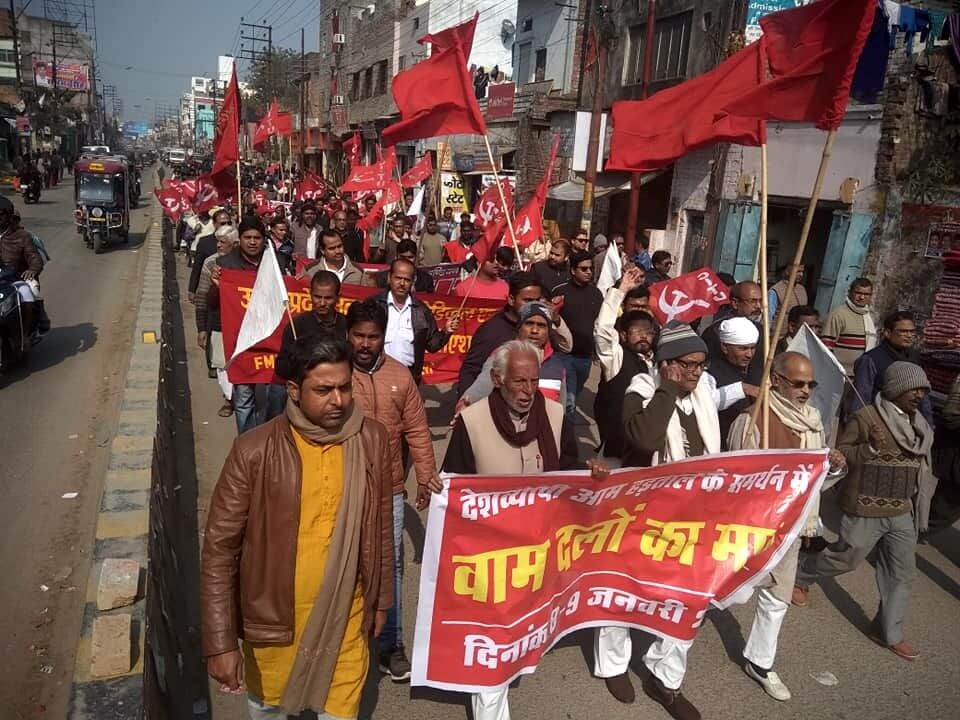 Uttar Pradesh: Workers’ organizations organized a rally and meeting in state capital Lucknow on 8 January, addressed by CPI(ML) State Committee member Meena Singh and AICCTU District convener Madhusudan Magan. The meeting was attended in large numbers by working women, e-rickshaw drivers, construction workers, and domestic workers. At Allahabad, the Contract Workers Association organized a dharna at Phulpur on 8 January, followed by a march on 9 January which culminated in a meeting at the Hanuman Mandir at Bhulayi addressed by AICCTU State Secretary Anil Verma, Narendra Pratap, Subhash Patel, Virendra Pratap, Phulchandra, Ramchandra Yadav, Jaiprakash, Dhyanchandra Patel and others. Anil Verma said that this general strike has frightened the government; the countdown to the downfall of the Modi government has started. Comrade Narendra Pratap Advocate said that the Modi government sod the dream of ‘achhe din’ but has failed on all fronts. Hundreds of workers were present at the march and the meeting. Earlier, on 8 January the Contract Workers Association staged a dharna protest at the Phulpur Tehsil complex.

AIARLA organized a rally from the CPI(ML) office at Gorakhpur, followed by a meeting at the Municipal Corporation. They were joined by members of the Uttar Pradesh Chowkidar Union. The meeting was addressed by District Secretary Rajesh Sahni and other leaders who said that this anti-people government will be thrown out in the coming elections, and the last nail in the coffin will be hammered by students and youth who will reach Delhi from across the country to participate in the student-youth rally on 7 February. A joint Left rally was organized at Faizabad which culminated in a meeting at Gandhi Park addressed by leaders of various Left parties. CPI(ML) District in-charge Ateeq Ahmed said that the Modi government is taking policy decisions against farmers, workers, students, youth, and helping only its crony capitalists. Rallies, marches, and meetings were also held at Sonbhadra, Ghazipur, Banaras, Mau, Azamgarh, Mirzapur, Chandauli, Deoriya, Rae Bareli, Kanpur, Jalaun, Sitapur, Lakhimpur Kheeri, Moradabad, Maharajganj, and the Paliya sugar factory. 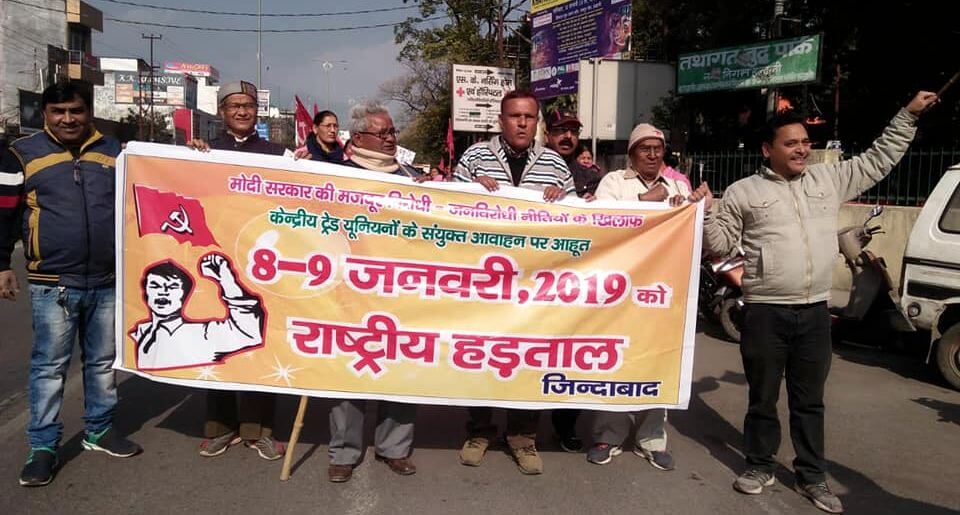 Uttarakhand: A protest meeting was held at Buddha Park in Haldwani in support of the 2-day general strike against the anti-worker policies of the Modi government. This was followed by a rally through the town and a meeting addressed by Raja Bahuguna, Purushottam Sharma, KN Sharma, Manoj Gupta, Yogesh Pant, BS Dhapola, Baburam Diwakar, Jitendra Martoliya, Kailash Pandey, Rena Bala, Preeti Rawat, Reshma, JS Rautela and other leaders.

Rajasthan: Hundreds of workers organized a rally under the AICCTU banner at Salumber which culminated in a meeting at the Sub-division HQ and a memorandum submitted to the President through the Sub-divisional Officer. The meeting was addressed by Mahendra Chaudhury, Shankarlal Chaudhury, Saurabh Naruka and others. The delegation which included Tejki Bai, Gautam Meena and Bhagal also submitted a memorandum on local issues to the Sub-divisional Officer; the chief of these demands being the commencement of MNREGA work in view of the rampant unemployment in all Panchayats of Salumber Tehsil.

During the strike, 1500 workers who were holding a peaceful rally for their democratic rights at the Japanese AC company Daikin in Neemrana were lathi-charged, water-cannoned, and tear-gassed by the pro-corporate police who even resorted to firing in the air. Many workers received grievous injuries and are admitted in hospital.

Puduchery: The bandh in Puduchery was called by the CPI(ML), CPM, CPI, DMK, VCK and Congress. All enterprises in Puduchery and Karaikal remained closed. ‘Rasta Roko’ was organized at 11 important places in the State. About 1,000 people were arrested, including about 200 activists of CPI(ML) and AICCTU. 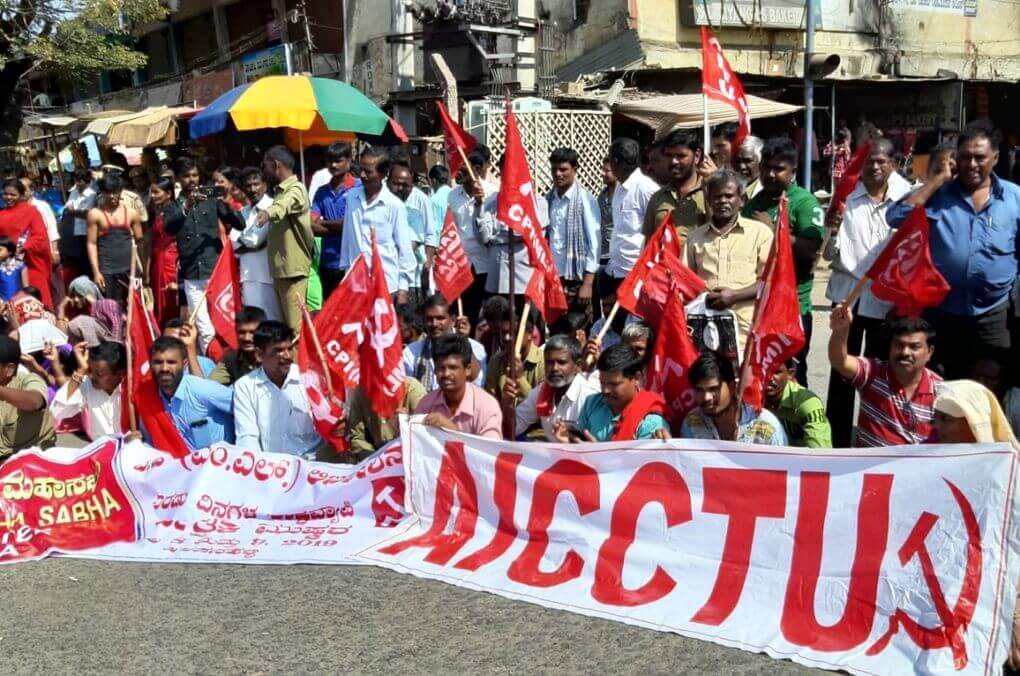 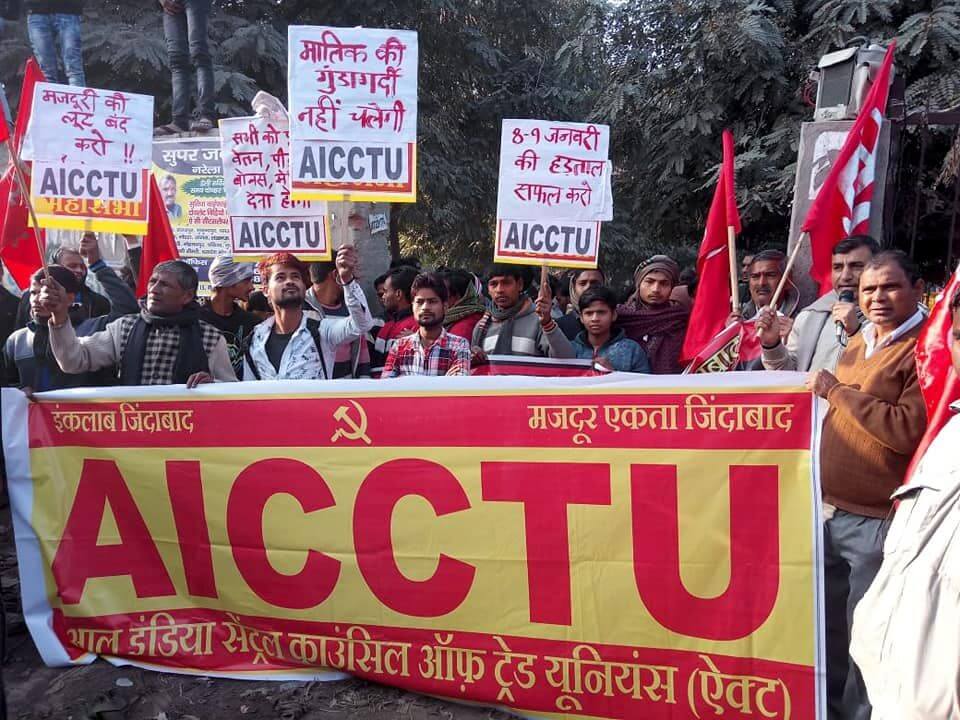 Delhi: AICCTU played a leading role in organizing the successful hartal by industrial workers in Narela, Wazirpur, Patparganj, Okhla, and other industrial areas. The contract workers at JNU also organized a successful strike under the leadership of AICCTU.

Odisha: AICCTU played the main leading role in the success of the strike at Bhubaneshwar and Puri and in organizing the Rail Roko. Rasta Roko was also organized at Gunppur, Raigarha, Bhadrak, Rourkela Steel Plant, Khurda Industrial Area, NIRTAR institute at Cuttack, and Bhubaneshwar.

Chhattisgarh: The strike was fully successful at BALCO in Korba. Sanitation workers at the Bhilai Steel Plant went on partial strike. Other industrial workers and Anganwadi workers also participated in the strike. 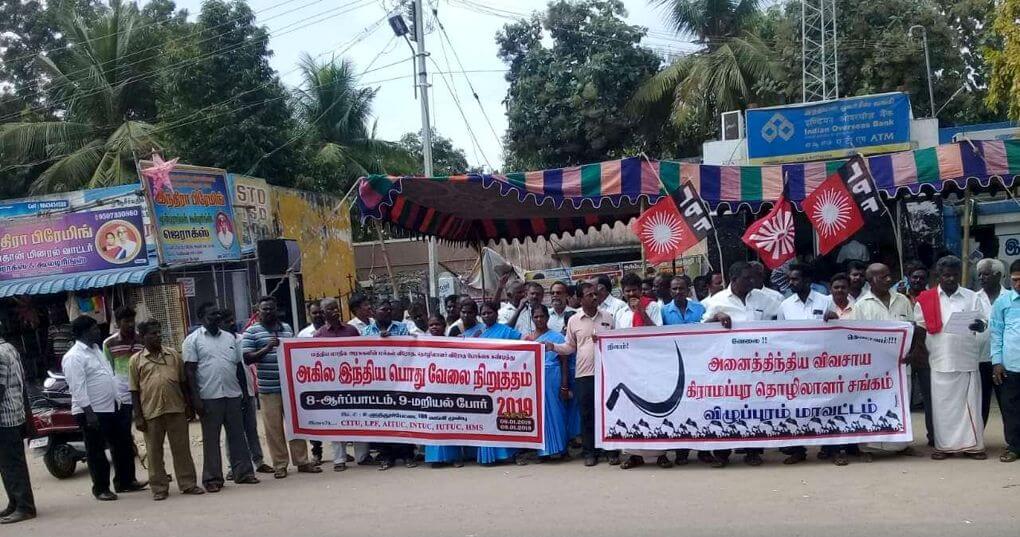 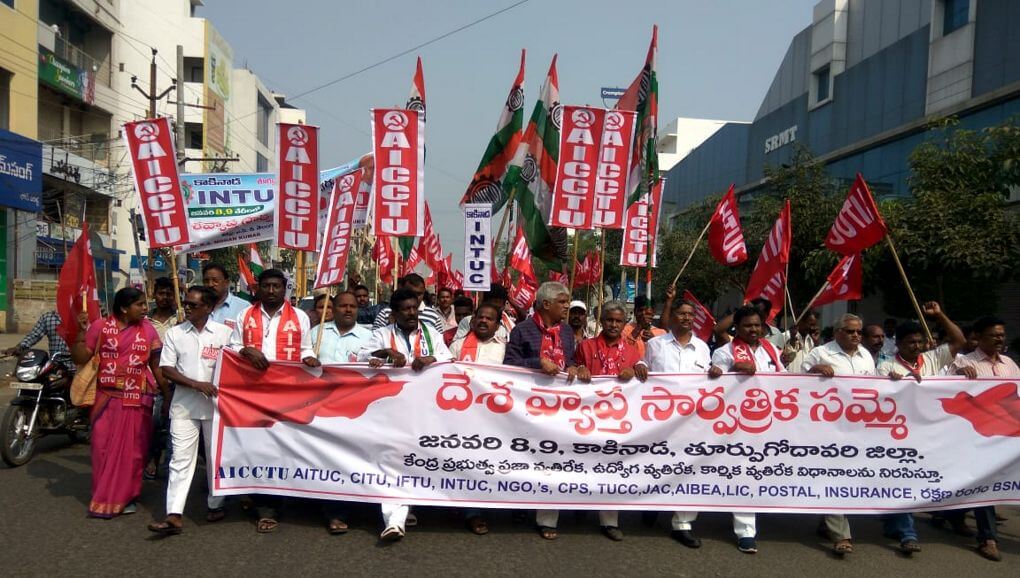 Andhra Pradesh: The effect of the general strike could be seen clearly in all parts of the State and enterprises remained closed at various places. AICCTU activists organized rallies in support of the bandh at different places including Mangalagiri and Kakinada.

Punjab: AICCTU played a leading role in the success of the bandh in Shardulgarh, Nandgarh, Bareta, Boha (Mansa District), and in Barnala and Gurdaspur Districts as well. AICCTU participated in hartal programs at Chandigarh and the Mess Workers Union (affiliated to AICCTU) at Punjab University observed a complete strike and organized a rally in support of the bandh. 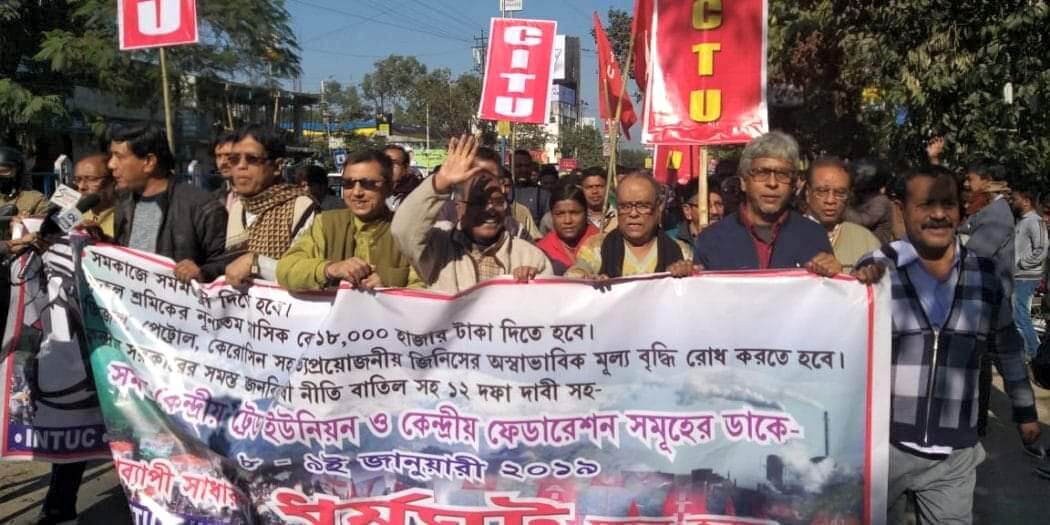 West Bengal: Countering attacks by the Trinamul Congress, AICCTU played a leading role in organizing the bandh at North 24 Parganas, Hooghly, Kolkata, Nadiya, Siliguri, Asansol, Jalpaiguri, and the tea gardens of North Bengal. Many of our leaders including Basudeb Bose, Dibakar Bhattacharya, and Babu Das were arrested. A joint trade union rally was organized at Siliguri. Trade unions at Chittaranjan Locomotive Works organized a joint protest against privatization the railways. 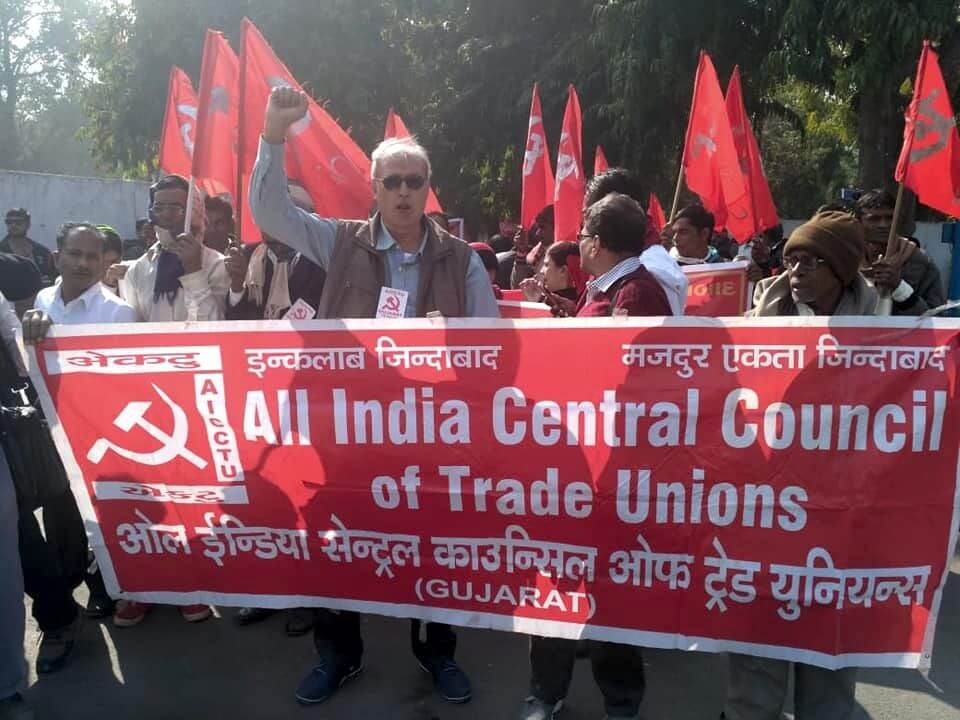 Gujarat: A joint trade union rally was organized in Ahmedabad in which ASHA workers participated in large numbers.

Jammu & Kashmir: The J&K state council of the AICCTU held a protest rally and a demonstration in front of the office of the Labour Commissioner, J & K government, Jammu on the morning of 9 January and presented a charter of demands of the working class to the J&K Governor.

The rally was addressed by the state council president Com. O P Sanyal who exhorted the workers to be united and mark a beginning of the long struggle for the rights of the working class. He said that AICCTU is preparing a blue-print for countering the anti-labour policies and establishment of a socialist society in J&K as well as the entire country. He also said that the present political system was not interested in combating unemployment but rather was involved in misappropriation of funds from the state exchequer and hiring working class on cheaper rates. He highlighted the regime of loot in the state and the county.