Institutional Murder of a Dalit Girl in Bihar

THE oppression of students from dalit and deprived communities continues unabated despite nationwide protests and condemnation of governments and institutions who have failed to ensure security and dignity for the students. There seems to be no end to incidents like institutional murder of Rohith Vemula in Hyderabad, Rape and murder of Dika Kumari in Bihar, sexual exploitation of girls in shelter homes in Bihar and UP, incidents of girls’ trafficking in various places, even after the Supreme Court’s scolding of the Bihar government.

Now its Khushbu Kumari, a dalit nursing student from Jahanabad studying in IGIMS in Patna, who was forced to commit suicide in highly suspicious conditions after a meeting with the Principal of her institution. Initially the institute tried to hush up the matter, but in face of the resistance by other students the administration had to come to a backfoot. The girls told that Khushbu had committed suicide immediately after she came back from the principal’s office, though they are not aware of what happened in that meeting with the principal. They told that Khushbu had to face discrimination and humiliation on a regular basis by principal and some other teachers which she was unable to bear.

The students of this nursing institute are on a struggle path demanding CBI inquiry and justice for Khushbu. A large number of civil society members also came in support of the girl students and held a candle light protest. From 12 Dec onwards, nursing students are sitting on an indefinite fast. AISA and AIPWA have come forward in solidarity with their struggle and on 13 Dec CPI(ML) MLA Mahboob Alam and AIPWA General Secretary Mina Tiwary along with many activists joined protesting students at the IGIMS.

The Dean of the college eventually invited students for talks and accepted their memorandum. The memo clearly describes how they had to face caste discrimination as well as sexual harassment repeatedly.

Khushbu was a first year student hailing from dalit community. She had to face discrimination as well as lewd comments by the officials including the principal and many teachers. The day she died, she was called by the principal in his chamber, what took place inside no one knows but after coming out she immediately rushed to her room, shut the doors and hung herself. Many girls in the institute told that she could have been saved if administration had acted promptly, but on the contrary they wasted time in collecting signatures for permission to break the doors which delayed the rescue of the girl. And after that they waited for the ambulance to come, although many teachers in the institute have their own cars which could have been used for taking her to the hospital. Other girls present at the spot were not allowed to go near Khushbu and an employee removed her body. The time she could be taken to the ICU she was already dead.

After this incident many girl students went inside Khushbu’s room but they could not see anything like a suicide note as was claimed later. The TV channels without loosing time were showing a ‘suicide note’ written by Khushbu which said, ‘sorry papa, I couldn’t do anything’. The fact is that Khushbu is married and has a child, and surprisingly she did not mention her husband and child in that note! Fellow girls doubt that suicide note and suspect that it may be a concocted one.

Her body was quickly sent for the post mortem. The students have demanded arrest of the Principal immediately who has been booked under the SC/ST Act. They are also demanding suspension of the Principal and a CBI inquiry.

In the night of 14 Dec administration cracked down brutally on the protesting girls and fellow students. Many student leaders including Ramji Yadav of AISA were arrested by the police. They were released later after the intervention by CPI(ML) leaders. Now the principal has been sent on the vacation, an inquiry committee was formed by the state Health Secretary but ironically that committee has not taken the statements of any of the fellow students. Even the police took statements on record on 15 Dec after the protests. The so-called inquiry committee is being seen as a delaying tactic to hush up the matter while the state health minister as well as Health Secretary both are enjoying a trip to the USA.

The struggle for Justice for Khushbu continues with determination. Meanwhile a CPI(ML) team comprising comrades Rambali Yadav, Shriniwas Sharma and Ramadhar Singh visited Khushbu’s family in her village. The villagers are shocked by her sudden demise.

The CPI(ML) has organised protests in many places in Bihar against this institutional murder. One such protest was held in Jahanabad on 17 Dec which was attended by a large number of people from different walks of life. 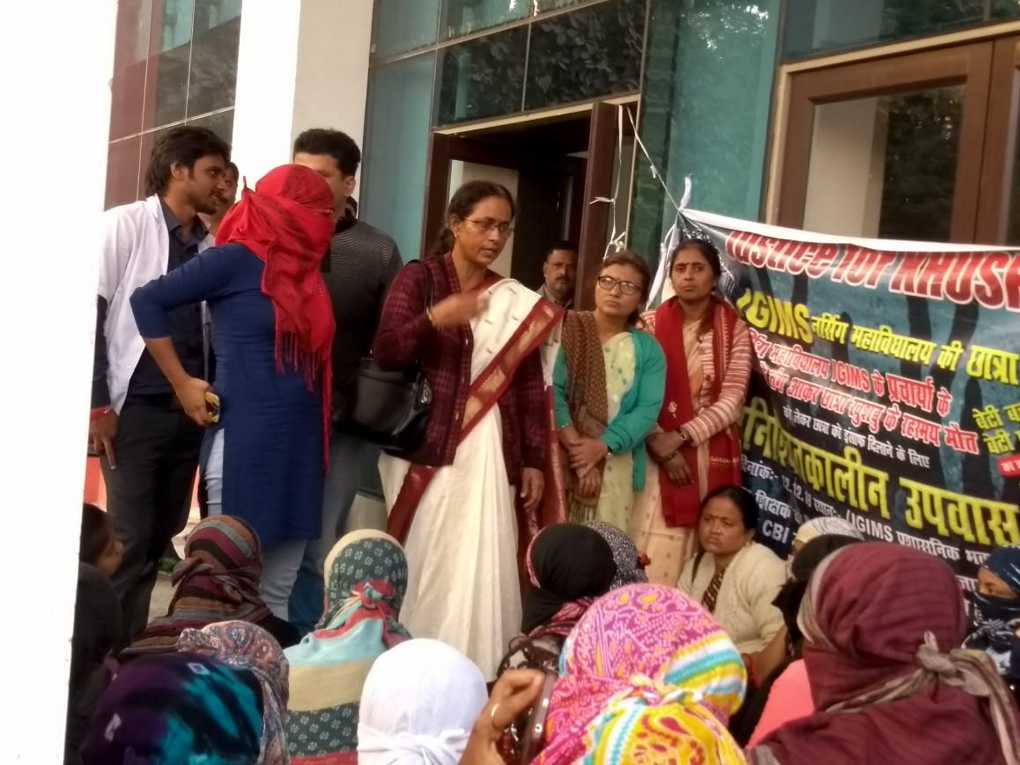